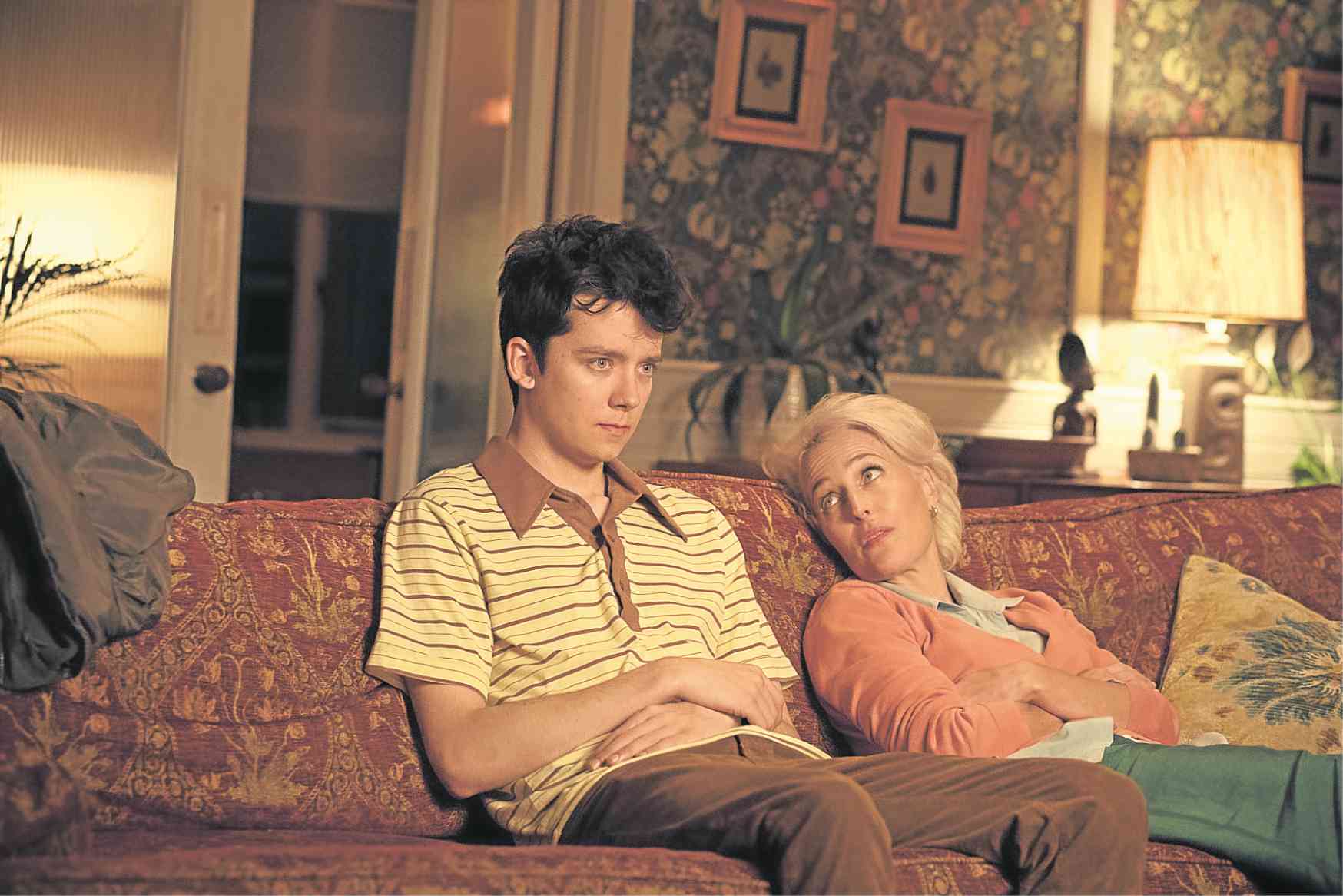 From Scully to sex therapist

Gillian Anderson (“The Fall,” “American Gods,” “The Spy Who Dumped Me” and of course, “The X-Files”), who plays Jean in the show, said, “I don’t feel like I’d seen this character before and suddenly had the opportunity to play somebody who is quirky and potentially funny as she can be. It just felt kind of alive and fresh and new and fun.”

Jean is a sex therapist and also mother to Otis, an inexperienced and socially awkward teenager played by Asa Butterfield (“Hugo,” “Ender’s Game,” “The Space Between Us”). Jean is brilliant, she’s witty, she’s cool—except maybe to Otis, to whom she’s often a source of embarrassment. Watching Gillian and Asa in scenes together is a joy—Otis’ awkwardness and Jean’s lack of filter are comedic fodder. “The minute we picked up the script, we laughed and laughed and laughed,” Gillian said. “That is quite unusual I think, even for comedy, that it’s sustained over the period of time of eight hours.”

“I wish my mom was a sex guru,” said Otis’ friend Eric in one scene.

Playing mother and son was a lot of fun, according to Asa. “We had a really good time, actually. It was an intense working relationship. It’s a really sweet relationship with very funny scenes and very honest scenes that really reminded me of my mom.”

Gillian said, “It was interesting mapping it out because there is definitely a breakdown of their relationship as the season goes on and he grows up and wants her to have less and less to do with him and his life and to get less personally involved. Yeah, it was fun.”

Jean speaks to Otis like he’s an adult—even (or especially) when it comes to sex.

“Well, if you’re going to do drugs tonight, remember to buddy up and look after one another. Let me get you some condoms,” Jean tells a mortified Otis after finding out he’s going to a party in episode two.

“It’s one of the things I love about Jean’s and Otis’ relationship and the way Laurie (Nunn) has written the relationship. They’re almost like peers rather than mother and son,” said director Ben Taylor.

“One of the things that was really important for me to work out with the writer and producers is if she is this sex therapist and she is professional, how believable is it that she is so inappropriate and steps over so many boundaries with her own son? How far can we take that? I think that was a very interesting concern for all of us,” said Gillian. “You get the idea that she’s actually quite good, maybe even better at being a sex therapist than she is at imparting wisdom to her son or not imparting too much wisdom to her son. I think she struggles with that a bit.”

But is Gillian like Jean as a mom in real life? Does she talk to her kids openly about sex? “My boys are too young, really, to have that yet. I sort of had it with my daughter but it was more focused on just trying to scare her, just talking about all the things that could happen if she had unprotected sex, grow extra limbs and stuff like that. She’s still a virgin. She’s 24,” she said, laughing.

Despite his lack of experience, Otis has an incredible breadth of knowledge about sexuality (that’s what happens when both your parents are sex therapists, we suppose), and is cajoled into setting up an underground sex therapy clinic in his school.

Set in the fictional English town of Moordale and shot entirely in Wales in the United Kingdom, “Sex Education” is a teen comedy with a nostalgic feel. “It has this very British feeling but really has this American nostalgic ’80s John Hughes vibe and mashing those two things together,” said writer Laurie Nunn.

“This is in a sense almost like a love letter to the John Hughes films and the ’90s rom-coms so for people who saw those, there will be an element of nostalgia for them and the reason they will stay watching is it will remind them nostalgically of what they enjoyed earlier in their youth. I have a big appreciation for nostalgia,” Gillian said.

It may be a show about teenagers but, Gillian said, “It was important for me, especially with the series being written by a 20-something-year-old, as somebody who’s just turning 50, that there was enough of the kind of element of what a 50-year-old woman experiences in life and her hormonal changes and emotional changes, etc. imbued in this person that I was creating so it felt like I was representing someone of my age appropriately.”

Yes there’s quite a bit of sex in “Sex Education,” but it’s also about family, friendship, identity and growing up. It’s heartwarming and hilarious. It’s such a fun show.

Asa said, “What the show highlights is it’s absolutely fine to be different and be a bit odd and to have these hang-ups and not find it easy to do certain things. It shows all of these weirdnesses and doesn’t shy away from them. I hope they make people realize, oh, this is normal, I’m not a kind of outsider or I’m not a complete freak.”

“Or you might be and it’s all right. It’s okay to be,” said Gillian.

We had to ask Gillian: what’s more challenging, playing Hannibal’s psychotherapist or a sex therapist?

“Probably Hannibal’s psychotherapist. I think the stakes might be a little bit higher for her,” said Gillian.