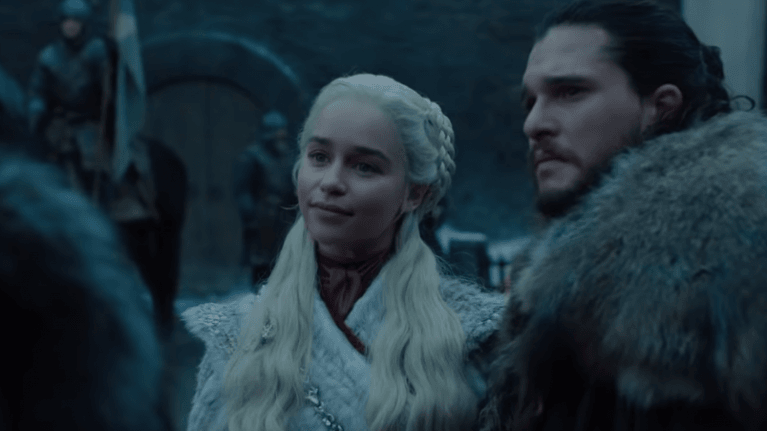 Over-analyzing the ‘Game of Thrones’ teaser

Just how much knowledge can you gain from four seconds of footage? This is the question facing anyone who leapt to YouTube after hearing there was new footage from HBO’s “Game of Thrones” season 8 available.

Of course, it turned out the spot, lasting just 1:01, is for all of HBO’s 2019 shows, including glimpses of “Veep,” the new season of “True Detective” and the TV adaptation of “Watchmen.” How long exactly is the new footage from “GOT?” Excluding the dragon at the start, it is four seconds long, starting at the :40 mark and ending at :44.

Those precious four seconds have been analyzed and re-analyzed online—over-analyzed, really—because of several reasons. There’s still no telling when George R.R. Martin is going to finish (and subsequently publish) “The Winds of Winter,” the sixth book in the Song of Ice and Fire series (which the HBO series is based on), a book that had already missed its original 2018 release date. There’s no telling when the last book in the series, “A Dream of Spring,” will come out. It’s a good thing Martin has told showrunners David Benioff and D.B. Weiss what happens. Right now, there is no published source material, so there is no more schism between two factions, the book snobs and the unsullied TV viewers. Everyone finds out what happens at the same time.

Which is good, because we have been waiting for a bit. It’s been more than a year since we’ve seen new GOT footage. It’s still a few months away—the show is officially going to air “April 2019.” We do know that the eighth and final season will be six mini-movies, longer than the usual 50-minute episodes. It can’t come too soon.

So yes, let’s over-analyze, shall we?

The bits with the dragon flying into the “2019” (at the very beginning of the trailer) and the bit with Drogon flying above the Dothraki are both from season 7, the latter from the epic episode 4, “The Spoils of War.” 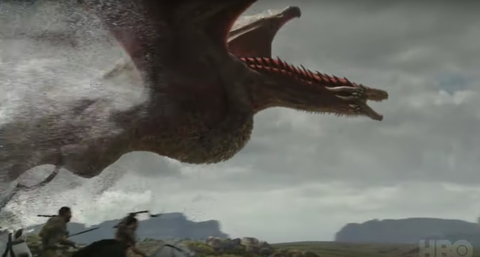 The real footage starts with the title of the show hovering on a bird’s-eye view of Winterfell covered in snow. 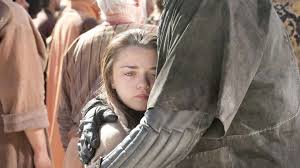 The camera switches and we see she is walking towards the Lady of Winterfell, Sansa Stark (Sophie Turner). Behind Sansa is Brienne of Tarth (Gwendoline Christie). 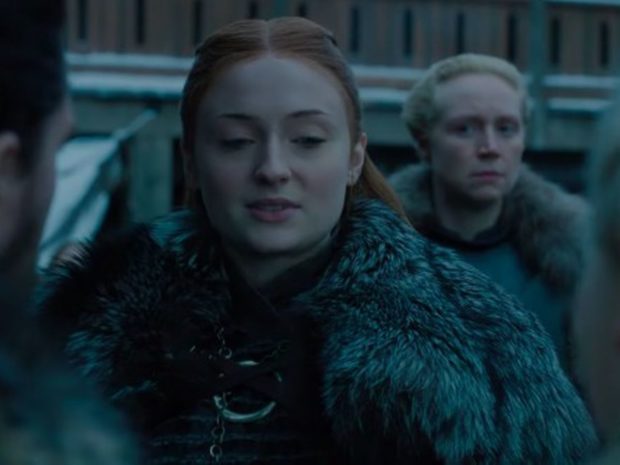 Sansa pauses, then she says, “Winterfell is yours, your grace.”

Then we switch back to Daenerys. Beside her is Jon Snow (Kit Harrington). Daenrys says nothing, but then she smiles. 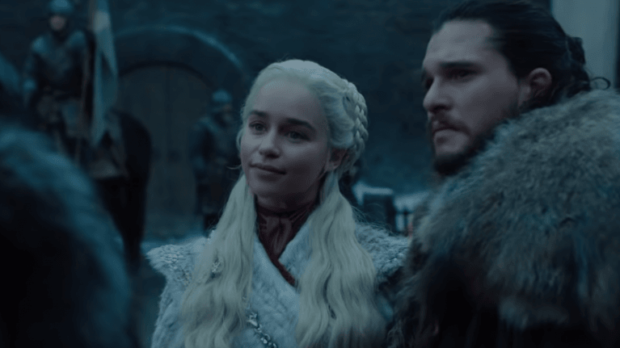 The context of the scene is clear. At the end of season seven, Jon and Daenerys have committed themselves to defending Westeros from the threat of the Night King and the White Walkers.

We’ve seen the White Walkers (with the invaluable aid of the zombified Viserion) destroy Eastwatch-by-the-Sea and the Wall (season 7, episode 7: “The Dragon and the Wolf”). We know that Castle Black is next. When they inevitably destroy Castle Black, Winterfell becomes the new target.

In the previous season, we’ve seen the northern lords argue with Jon regarding this alliance with Daenerys. We know that Sansa isn’t crazy about it. After all, they had fought a war to dethrone a Targaryen and now they will just turn themselves over to another Targaryen, never mind the soundness of her cause.

Sansa and Jon have disagreed about a great many things ever since they reunited in Winterfell, but this is their biggest disagreement. Since the truth of Jon’s parentage hasn’t been revealed publicly, Sansa is actually the proper titular head of Winterfell, and, by default, leader of the North by blood even though they swear to Jon as King of the North.

It’s already been speculated that Sansa is looking to take that title away from Jon. One must wonder if Jon isn’t just a little biased in his loyalty to Daenerys.

So what is up with the decision to give Winterfell to Daenerys. It makes tactical sense for the effort against the White Walkers to be under one leader—Daenerys—politically speaking.

But this is also Sansa playing the long game. She is up to something.

She puts on her best mean girl face and pauses dramatically before, in a stilted and very overly formal manner, says, “Winterfell is yours, your grace.” She is clearly doing something against her will. It’s actually somewhat sarcastic. She may have orchestrated the death of Littlefinger but she learned a thing or two from him.

That’s also why Brienne looks so worried. Brienne has been privy to the arguments between the lords of the North. She knows this cannot be easy for Sansa.

That’s also why Jorah wears an expression of wariness when he walks up next to Daenerys. This alliance isn’t rock solid, at least not yet, and he isn’t sure what to expect.

Sansa isn’t the only mean girl here, though.

With what can only be described as an expression of either smugness or bemusement, Daenerys pauses dramatically herself, as if she wants to say something. But then she chooses not to. And smiles, a little too slyly. She isn’t Khaleesi for nothing.

Next to Daenerys, Jon is wearing his own strange expression, one of puzzlement, with a slight knit of the brow, like he doesn’t understand what is happening.

With the big threat of the White Walkers, it is often easy to forget that the North and the Targaryens are blood enemies, and have been for so long. This is still GOT, and everyone’s playing, maybe except for Jon, which might be his own undoing.

Sansa and Daenerys do not trust each other. That is the most obvious takeaway from the teaser. This Wolf and this Dragon are not friends.

This scene is said to be the first scene in the first episode of season 8. It establishes that there is an alliance, but an uneasy one. The teaser tells us it’s even more precarious than we think.

HBO is playing it smart if a bit tight-fisted with the teaser. No Arya Stark, no Cersei Lannister, no Tyrion, no new footage of the dragons (on ice or otherwise) or the White Walkers. The teaser hints at the political ramifications of the Winterfell handover, and the bitter feelings it promotes in the North.

It reveals that Sansa and Daenerys are most likely plotting against each other somehow, and that Jon either doesn’t realize it (most likely) or is powerless against (both can be true). Not everyone is a fan of the Daenerys-Jon coupling.

And despite their emotional reunion in season 6 (episode 4: “Book of the Stranger”), Jon and Sansa have never been particularly close, and Jon’s decision to join forces with Daenerys is driving a wedge (or a Scorpion bolt) between them.

Will we get more footage before the show starts its eighth season? Probably. But in the meantime, these four seconds are all we have and we are savoring it.

As we await the beginning of the end for “Game of Thrones,” let us remember: “Night gathers and my watch begins… I am the watcher on the walls… for this night and all the nights to come.”