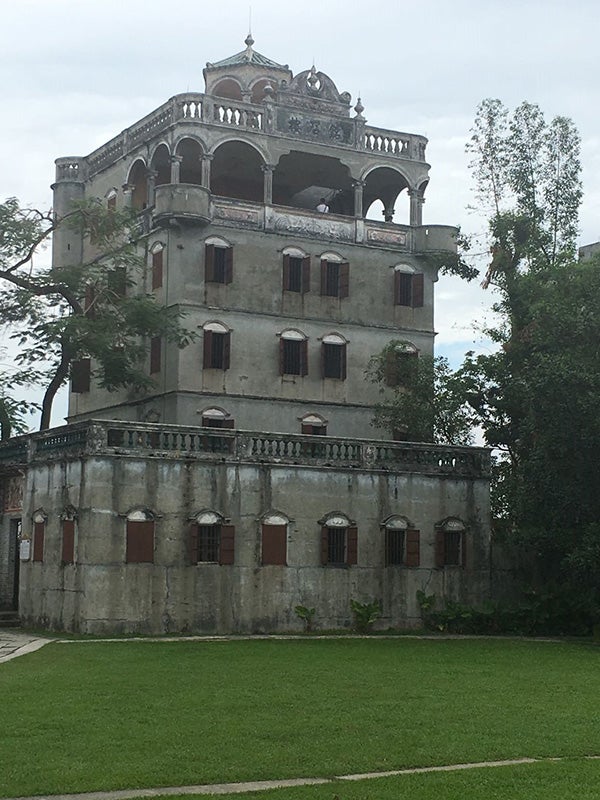 BEIJING — Luo Zhiguang is grateful to the village heads before him.

The Party chief of Tangxia township’s Liangxi village says the people who previously occupied his post did an excellent job of protecting ancient buildings.

And that has made the small settlement a big tourist attraction with growing appeal.

Luo also guides an increasing number of government officials, experts and journalists, who visit the village of 1,600 inhabitants in the Pearl River Delta city of Jiangmen, Guangdong province.

“About 90 percent of the houses in the village were constructed in the Qing Dynasty (1644-1911) and the early period of the 20th century,” Luo says.

“Liangxi is unique among other ancient villages in that its ancient buildings feature Western elements.”

Traditional-Chinese rooftop carvings feature such motifs as dragons, phoenixes and fish, which symbolize auspicious meanings, such as longevity and happiness. But doors, windows and balconies hail to Western architecture.

“Most houses were built by Chinese who’d returned from the United States,” Luo says.

The nearly 8-square-kilometer village is less than two hours’ drive from the provincial capital, Guangzhou.

An ancestral temple that honors clan elder Luo Gui features a statue of the patriarch.

He’s said to have led his clan to the area when fleeing wars in northern Guangdong about 800 years ago. Most villagers still share his surname.

Visitors also explore the 20-meter-long Qingyun Road that’s paved with flagstones that are over a century old. Another name for the main thoroughfare, pingbu qingyun, means “being promoted” in Chinese, so villagers will ceremoniously walk along the road before leaving to study or work outside.

The chastity arch in the village’s center honors a widow surnamed Wu, who remained faithful to her husband who died when she was young. The 4-meter-high, 3-meter-wide arch was built in 1736.

The 2,440-square-meter ancestral hall built in 1707 is Liangxi’s largest temple.

It was the main public building. Clan elders handled local affairs and mediated disputes in the building.

The village walls and diaolou-structures built on pillars-hail to the early period of the 20th century.

Liangxi also hosts a workshop that demonstrates how citrus tea is produced during the harvest season.

Pu’er tea from Yunnan province is placed into hollowed-out fruit and sun-dried.

It’s the only industry in Liangxi-that is, aside from its growing tourism, which, indeed, bodes well for locals’ livelihoods.