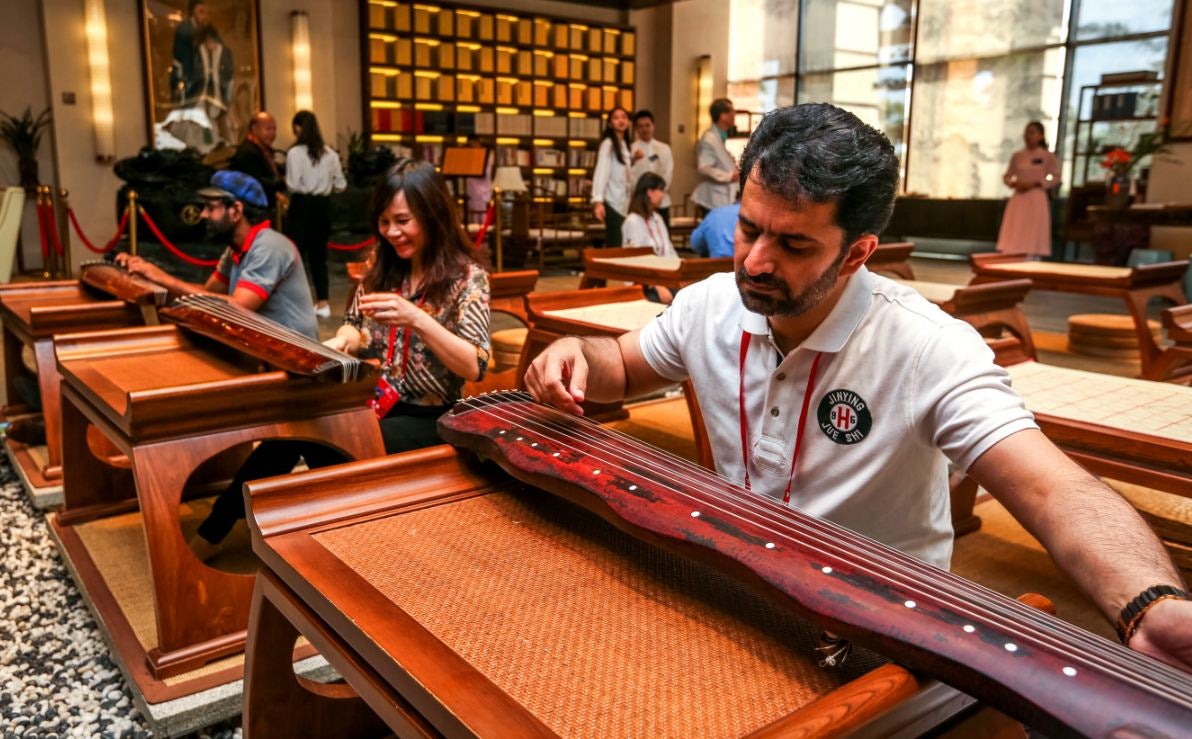 Foreigners learn to play the guzheng, a Chinese plucked string instrument, in October at a medical tourism center in Qionghai, Hainan province, where visitors can get a taste of Chinese culture and medicine. [Photo by Yuan Chen/For China Daily]

The move follows a plan released a week ago by the National Development and Reform Commission to encourage tourism-related activities in Hainan, such as medical tourism, horse racing, sports betting and an instant lottery.

Medical tourism has become one of the world’s fastest-growing emerging industries, and Hainan has unique conditions for developing it, Governor Shen Xiaoming said on the sidelines of the Boao Forum for Asia Annual Conference 2018 in April.

Under the plan, Hainan will tap its characteristic resources of vast coastal areas, tropical rainforests and hot springs to cultivate innovative healthcare and leisure products, and develop a high-end and characteristic medical tourism service system.

It will strive to establish a complete healthcare tourism service system that provides high-end, precision medical treatment and high-quality specialty in medical beauty and health promotion services, it said

To stimulate the industries, Hainan will explore flexible policies, regulatory models and management systems for investment, financing, fiscal and taxation, financial innovation, entry and exit, to create a highland for medical tourism opening up.

Worldwide, increasing convenience in transportation, expansion of the internet and improvement of people’s incomes have led to a booming medical tourism industry, which grows at about 20 percent annually around the globe. According to media reports, the business volume of medical tourism jumped to $700 billion in 2017 from $10 billion in 2000. In China, more than 600,000 people went overseas as medical tourists in 2016.

As a demonstration project, launched in 2013 by the State Council to explore international medical tourism, Boao Lecheng International Medical Tourism Pilot Zone has been granted nine special preferential policies including permission to import medical technology, equipment and medicine, and cutting-edge technological research on stem cells before other parts of China.

According to Shen, the pilot zone will first attract domestic patients who would otherwise travel abroad, and later patients from Southeast and even the whole of Asia. Last year, medical institutions in Sanya alone received nearly 20,000 medical tourists from overseas.

“The industry will also attract international medical institution investors. … In the long run, there will also be comparative advantages for Hainan to attract medical tourists from southeast Asian countries and other areas in terms of natural environment, favorable policies and convenient air services,’’ said Chen.