Why my son and I got into jiujitsu | Inquirer Lifestyle 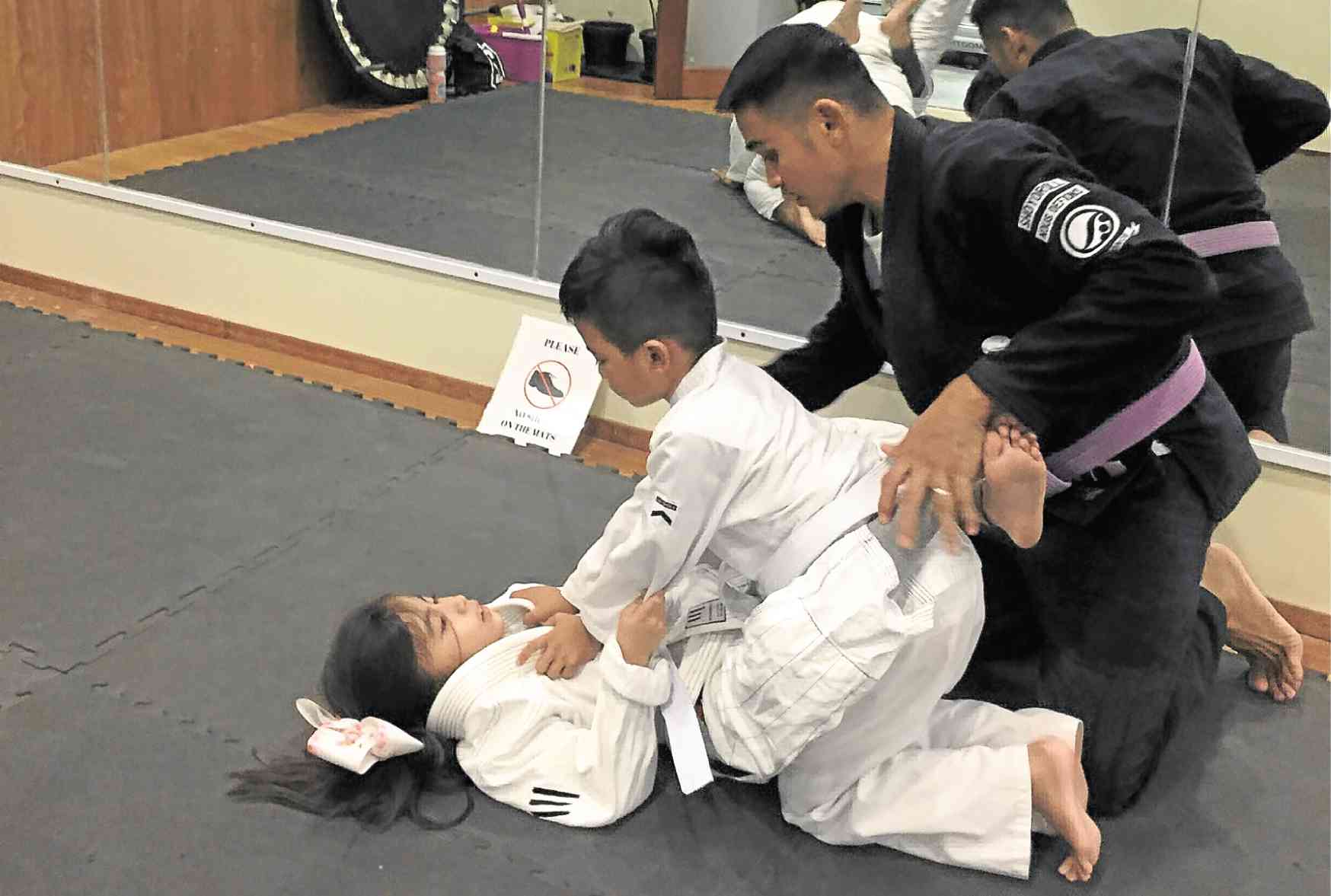 Why my son and I got into jiujitsu

At first I thought jiujitsu looked gross, but this Japanese martial art is suitable for the weak or the bullied. Initially I encountered it in a grade school textbook about a boy who was being picked on.

Grade school was socially tough for me. And as my son Jack started second grade, I wanted him to be capable of defending himself. I enrolled us both in jiujitsu classes.

I wanted to learn jiujitsu in gym with a good mix of participants: athletic types for aspirational goal setting; women and children, meaning an inclusive, safe and clean environment; professional coaches with good communication skills; training partners who weren’t sleazy or patronizing; an accessible location; and a flexible schedule.

The Deftac Ribeiro South Madison gym in Alabang Hills fulfilled all my requirements.

I wanted to equip Jack with a life skill, but Brazilian jiujitsu (BJJ) was something new and enjoyable for us to do together. Playfully wrestling with him was exhilarating even off the mats, as I got more confident with the physicality of it.

After a month, Jack took up a different martial art, but I want him to go back to jiujitsu for its practical discipline.

I myself continued training. I’ve confirmed that it’s really gross—all the sweat and crazily close proximity to training partners. But I soon got over that type of aversion.

I’ve dabbled in striking martial arts, but have zero ground skills and never thought I’d be interested in grappling, especially at my age, with my achy joints and old-lady issues.

Yet despite my being slightly claustrophobic, obsessive-compulsive and particular about my personal space, jiujitsu persuades me to embrace the uncomfortable. It has become my alternate universe where I can just be in the moment.

The drills are cathartic, and the rolls are physically and mentally challenging, exciting and intense. You end up with a mixed bag of incredible feelings of gratitude for what your body can still do, but realizing how much you still have to learn, and hope that you can still be better.

Rey Lastra, 39, is chef consultant, but dedicates a good part of his time as a BJJ coach.

When he was 5 years old, Rey was diagnosed with attention-deficit hyperactivity disorder (ADHD).
“BJJ and sports helped me a lot in controlling my ADHD,” he said. “It became my regulator… I was able to channel my energy into sports.”

In 1999, while in college, Rey took up jiujitsu but temporarily stopped to get into other sports, until he went back to it in April 2014. He hasn’t stopped since.

“I decided to train again as a challenge to myself,” he recalled. “I was then 35, doing triathlons, mountain biking and boxing. But jiujitsu was always on my mind. I told myself, if I don’t get back on the mats soon, I’ll probably regret it later in life.”

He hasn’t been competing as often, but most recently, at Pan Asia 2018, Rey won the gold in the lightweight division and the silver in the absolute division.

“I wanted to try something that I felt most uncomfortable or weak in,” he said. “I first thought of jiujitsu as a sport where you have to be very flexible and agile, both of which I am not. To this day, I can’t even Indian-sit (sit cross-legged).”

Kervin has won the gold in most local tournaments such as Dumau, IBJJF Manila Open and Pan Asia. Internationally, he has won silver at the IBJJF Tokyo Open and bronze at the IBJJF Asian Open in Tokyo.

Kervin’s wife Catherine, 36, is a radiologist. A yoga practitioner who’s also into biking, she took up BJJ in November 2017.

“Kervin sprained his wrist in October 2017. I advised him to stop training for a while,” she recounted. “When he said he’d go back to it before I allowed him, I thought of watching over him to make sure he won’t put pressure on his wrist.

“Then I thought, why not try it myself? I started with just one session watching him and doing random drills, then it turned into a weekly thing, then twice, thrice a week, to a sudden competition.”

Catherine won gold medals in her first competition, Dumau, in the adult and open weight divisions.

The Garcias’ son Gael, 9, tried BJJ once. “He was bored,” said Kervin. “He likes team sports, like soccer. My daughter Mika, 11, hasn’t tried it yet, but said she wanted to, as long as I’m not the coach!”

As for Rey, he casually teaches his children Ysobel, 10, and Tomas, 9, some techniques at home. “Recently, we were watching UFC (Ultimate Fighting Championship),” he recalled, “and I got excited when they said they want to start jiujitsu this summer!”

Royce Buencamino, 40, a businessman and father of three girls, started BJJ training in October 2018 after seeing his daughters practice it.
“I decided to try it so I could bond with them and, at the same time, get some exercise,” he explained.

“It had done wonders. They eat and sleep better, and also seem to have improved health, not to mention they learn self-defense,” he added.

“My father recommended it,” he said. “I was also curious about how a weaker one can defeat a stronger opponent.”

His 13-year-old sister trains with him, too.

Kervin and Rey were training at Deftac Headquarters (BAMF) when management asked if they were interested to handle a jiujitsu chapter in Alabang Hills. At the time, Deftac was expanding all over the Philippines to promote the sport.

“With my timely retirement from overseas work in 2016, I agreed,” Kervin said.

Rey added, “When Kervin asked if I wanted to teach with him, I happily obliged.”

What sets their dojo (a hall or space for learning) apart from others?

“We cater to the community,” Kerv said. “Most gyms want to form a competitive team full of muscular/athletic guys, with hard training and rolls reserved for the elite. When competitions come, they plan to dominate the scene and promote their gym through the successes of their students. While we also want our students to win competitions, we want to form a welcoming environment first. Not everyone has to compete if they don’t want to.”

Who should try BJJ?

Rey said, “BJJ is for everyone—young, old, male, female. BJJ practitioners range from competitive athletes, to professionals who want to exercise and destress, to kids who want to learn self-defense and discipline.”

What is the ideal age to join?

“There’s no ideal age,” Kervin said. “We got millennials, 40-something moms, high school jocks and nerds. Our youngest student is 5 years old.” –CONTRIBUTED