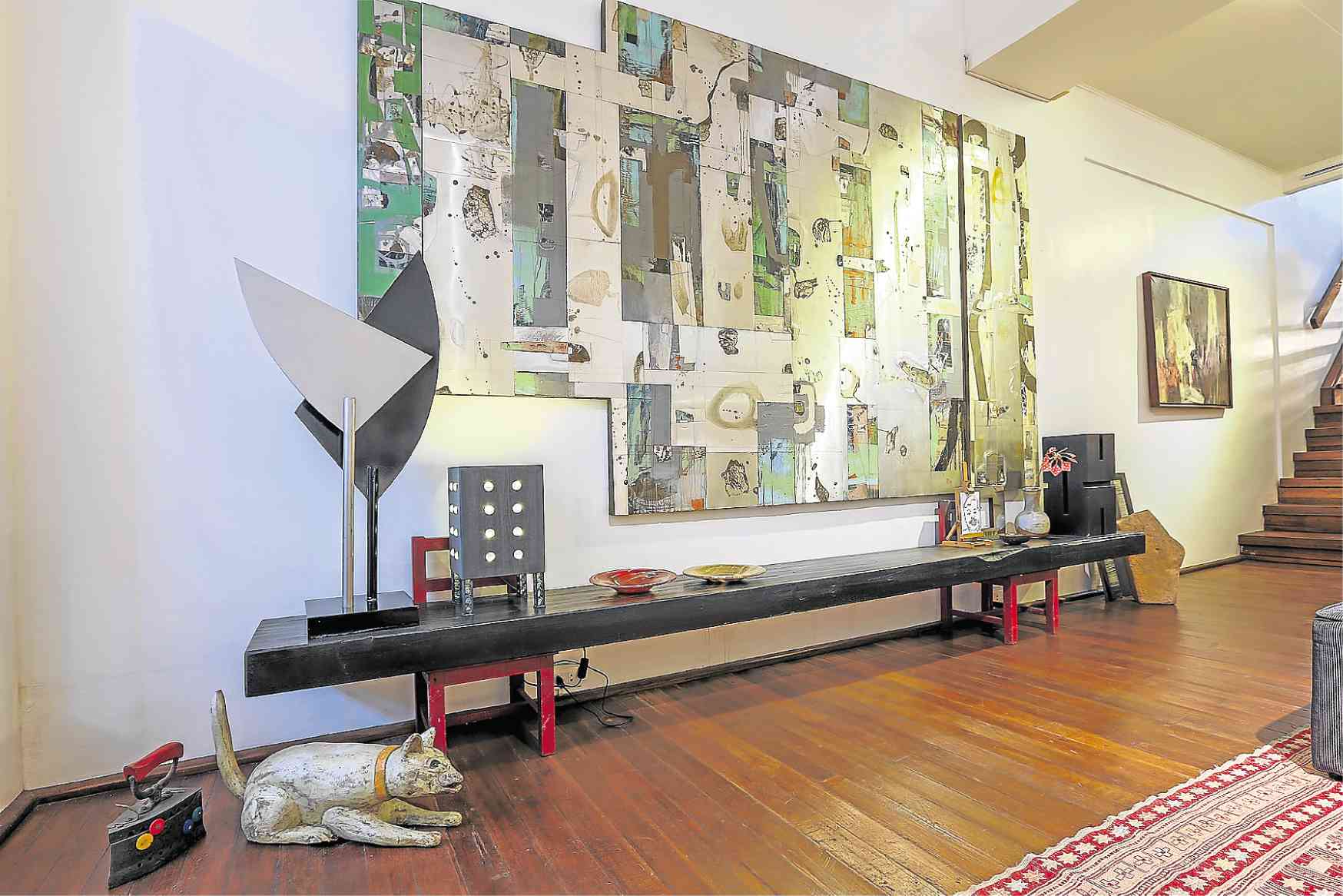 While contemporary artworks are displayed in two mid-century homes that make up the Avellana Art Gallery in FB Harrison, Pasay City, a personal collection of family heirlooms and artworks given by his artist friends and protégés lend character to a home built in 1964.

Nostalgia and sentiment inspired the renovation and décor of the house, as did Avellana’s knack for mixing textures and forms.

“I’ve kept the cabinet from my maternal great-grandmother, a metal chest and bench from my father, lighting fixtures from my paternal grandmother, and old plates, saucers and serving platters from my parents,” he says.

Avellana, who never owned a car, transformed his garage into an inviting entryway. Black pebbles surround a raised platform of old patterned tiles from Ilocos. A streamlined chair from Pampanga lends contrast to the fancy edges of a Viennese mirror.

The organic quality of a trunk sculpture by Pablo Mahinay plays against a small black-and-red lacquered painting. Narrow windows give visitors a peek into the living room.

Avellana knocked down walls to achieve an open plan on the ground floor. It’s the perfect layout for a home that becomes a social space for his nephews, nieces and friends on weekends.

On the second floor, more walls were demolished to make room for an indoor lanai perked up with patterned tiles. The old ceiling was removed to expose beams and facilitate better airflow.

Glass sliding doors open up to a terrace that brings the outdoors in and provides a relaxed setting for family and friends to hang out.

“This is like my family’s clubhouse. That’s why I’ve kept the spaces open,” he says.

Avellana wanted a quiet space for the night, so his bedroom is sparsely decorated with choice heirlooms. A bed covered with an abel Iloko spread complements the simplicity of the retro furniture and a ledge filled with small pottery pieces.

Cutwork transoms, typical of ancestral homes, are found everywhere, from the entrance to the bedroom, even on stair railings. The nostalgic feel is reinforced by reddish-brown tones of tanguile flooring, capturing the look of midcentury Filipino homes.

Apart from his talent in decorating, Avellana has a penchant for upcycling materials. Old glass panes are made into a divider in the kitchen and a backdrop for an Arturo Luz abstraction.

Backrests of Ambassador’s Chairs now serve as the headboard in the master bedroom. The old family leather trunk cast with wheels becomes storage and a mini-table.

Gathered together on an accent wall, old wine bottles from the gallery’s exhibition openings reflect a variety of colors and shadows when they catch the sunlight.

Avellana’s major furniture pieces are either heirlooms or pieces made by friends under his instructions. While most of his possessions are made of natural materials by local craftsmen, a couple of retro pieces give a nostalgic feel. The sculptural polyurethane Panton Chair and the Bertoia Wire Chair represent proponents of modern design.

The heart of his décor is the art that subtly educates visitors on the style and personalities of the artists who made them. Moreover, they reveal Avellana’s connections with them. Like the design of his house and furniture, these artists’ creations go beyond formulas. 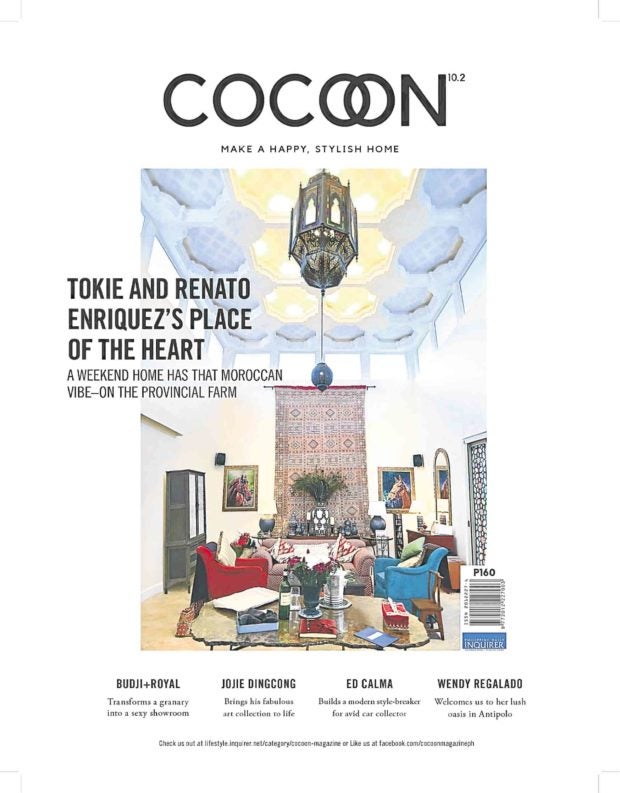 In the living room, an informal artists’ corner features the works of Avellana’s friends who make up the roster of his gallery. Jecky Alano’s trademark sculpture of a voluptuous woman stands on a red chair.

Then there is a Ral Arrogante sculpture made from metal scraps, and a sketch by representational artist Jose Pardo. Both the works of husband-and-wife artists Lao Lian Ben and Lilia Lao beckon viewers to ponder their minimalist canvas. They reinvigorate one’s spirit after a busy day at work.

Pottery by Joey de Castro and Lilia Lao are strewn around the house. Lilia’s pieces reflect her refined and elegant style. De Castro is famous for his rich glazes on sandy surfaces.

The Avellana home is decorated with a seashell lamp by architect Tina Bonoan, tribal-inspired accessories by Darla Villalon, and rare glass-and-marble plates by sculptor Impy Pilapil.

He favors abstractions by Eugene Jarque and Lex Calyp as focal points of the social spaces. Both are known for their powerful random strokes, seemingly accidental yet with balanced effect on the canvas.

Avellana also highlights some of his discoveries such as a hybrid cat-and-dog sculpture by the late Jesus Bermudez.

Avellana found Bermudez’s art in Negros Occidental in early 2000 and scoured the province to feature his naïve sculpture in his gallery. The sculpture shares space with a stone buttock by modernist Pablo Mahinay.

Avellana’s cousin, artist Ivi Avellana-Cosio, has a series of paintings in graduating colors arranged vertically. There is also a portrait of him by Ivi’s husband, abstractionist Allan Cosio.

Florencio Concepcion’s painting of vigorous, gestural strokes is tucked under the sculptural staircase.

Philip Escudero, Tuchi Imperial and Ben Razon have gifted him with their artsy photos, as have printmakers Pandy Aviado and Joey Bocobo with their engravings.

Avellana still has to bring out works by his discoveries such as Lynyrd Paras, Mac Valdezco and Noel El Farol.

“I’m not trying to be different. I’m just being myself. I get what I like, and I like to show what I sell,” he says. —CONTRIBUTED