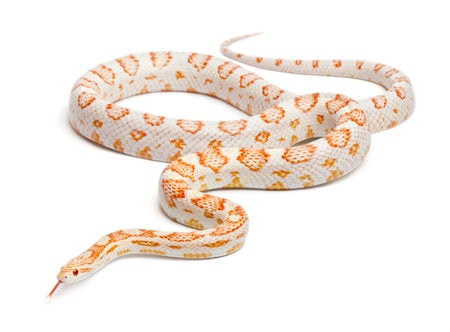 A young corn snake (as depicted in the photo) slithered out of a man's tea kettle in London. Image: INQUIRER.net stock photo

A man in London got an unpleasant surprise one morning as he did not expect a snake would slither out of his tea kettle.

Barry Downes recoiled when he saw the young corn snake hiding in his new pot he had bought at the Kensington High Market on Dec. 28, as reported by The Independent.

Downes said that after buying it, he unwrapped the kettle once he got home, and turned it on to make some tea.

“When I came back into the kitchen I spotted something on the floor,” Downes was quoted in the report. “At first I didn’t recognize it as a snake so I picked it up to put it in the bin but then it started wriggling.”

He used the kettle’s lid to trap the snake, and quickly called the Royal Society for the Prevention of Cruelty to Animals (RSPCA) for help.

“He explained to me that he had some problems with his sight so when he first saw the snake he thought she was string or part of the plastic packaging,” RSPCA animal collector  Ella Davies said. “Only when he picked her up did he realize she was alive.”

The snake was then taken to the Putney Animal Hospital for care.  Katrina Hallare /ra