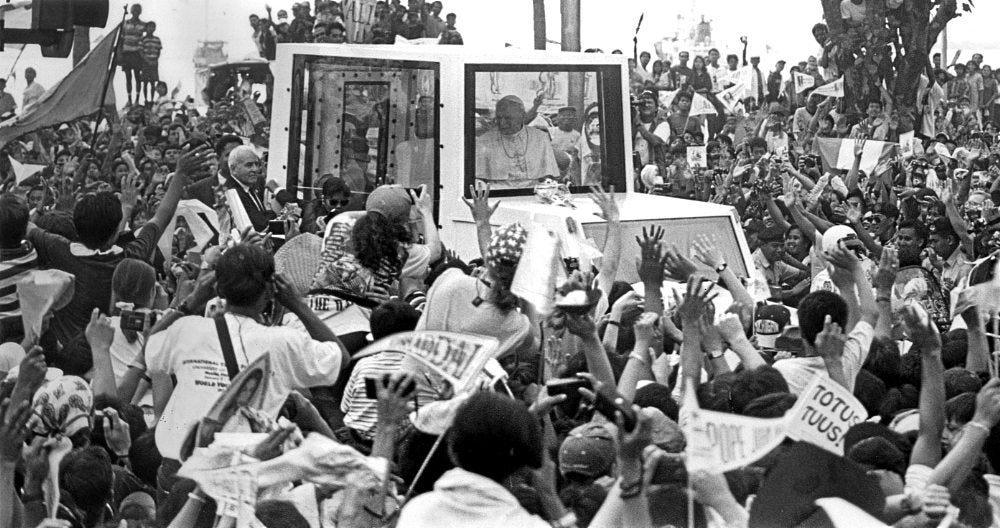 POPE John Paul II waves to the huge crowd inside his Popemobile during the 1995World Youth Day in Manila.

Closing its year-long celebration of its 400th anniversary, the University of Santo Tomas will mount an exhibit on the life and times of Blessed John Paul II, who had visited UST twice, in 1981 and 1995, reaffirming UST’s status as a Pontifical University.

UST Rector Magnificus Fr. Rolando V. de la Rosa, O.P., will open the exhibit “Ad Januam Coeli [To the Gate of Heaven]: A Commemorative Exhibit on Blessed John Paul II and the University of Santo Tomas” on Jan. 25, 4:30 p.m., at the UST Museum of Arts and Sciences.

De la Rosa himself was first-term rector of UST in 1995 when he welcomed the Pope to the campus on the occasion of the World Youth Day celebration in Manila and UST’s hosting of the International Youth Forum, the youth leaders’ conference component of the WYD.

Curated by Regalado Trota-José, commissioner of the National Commission for Culture and the Arts (NCCA) and UST Archivist, the exhibit features some of the late Pontiff’s rare relics and memorabilia, especially those associated with his two UST visits.

Also exhibited are photos, documents and memorabilia of Karol Wojtyla, the Christian name of John Paul II, when he was a priest in Poland before becoming a bishop.

The exhibit will include an enamel cross used by the Pope during his 1995 visit.

Also on exhibit will be the two papal chairs especially designed by UST artists for his 1981 and 1995 visits.

The 1995 chair was used by Cardinal Zenon Grocholewski, the special papal legate sent by Pope Benedict XVI last year during the opening of the UST Quadricentennial celebration.

A monstrance the Holy Father once used, lent to the UST exhibit by Malolos Bishop and UST Central Seminary alumnus José Oliveros, will also be displayed.

Also on exhibit will be the Popemobile, the high-security, bullet-proof papal vehicle especially made by Francisco Motors for the 1995 visit.

A small section will feature the Pope’s death in 2005 and his beatification last May by Pope Benedict.

Another section is titled “The Pontiff of UST.”

Also to be exhibited are the Papal Bulls and other ancient documents from the UST Archives and UST Heritage Library that historically establish the links between UST and the Holy See.

In 1619, Pope Paul V authorized the granting of degrees of Philosophy and Theology to all colleges administered by the Dominicans in the Occidental Indies.

In 1645, Pope Innocent X raised Santo Tomas to the rank of university.

In 1785, the title Royal was given by Charles III in recognition of the loyalty of the Dominicans and UST students to Spain during the war against England.

In 1902, UST was given the title Pontifical by Leo XIII, making UST only the second to be accorded the honor in history (after the Gregorianum of Rome) and even ahead of Angelicum (Blessed John Paul’s alma mater) and other European institutions.

And, in 1947, UST was given the title The Catholic University of the Philippines, by Pius XII.

The Papal Bulls and edicts reaffirm UST’s reputation as the oldest university in Asia.

In 1970, Pope Paul VI, in the first papal visit to the Philippines, delivered his address to the Filipino youth at UST.

Paul VI made special mention of UST: “We wish to express first of all our great esteem for the Pontifical University of Santo Tomas. It is a university which is one of the most renowned for the richness of its history, one of the most important in number of students, and one of the most well-known for the care it devotes to education of high quality.”

In 1981, Pope John Paul II made his first papal visit to the country and gave his address to the Filipino youth at UST, which he called “an illustrious university.”

Later at the Rizal Park, he beatified Lorenzo Ruiz, the Filipino protomartyr of the 17th-century persecutions in Japan, and his companion-martyrs, nearly all of whom were alumni of UST. It was the first beatification outside of Rome in history.

During his 1995 visit, John Paul II spoke even more warmly about UST.

“As a Pontifical university, Santo Tomas has a special right to the Pope’s attention,” the Pope said. “In fact, this is the third visit of a pope to the oldest university in Asia: Pope Paul VI came here in 1970; I came in 1981 and now God gives me the grace of being here again to meet the ‘university world’ of the Philippines.”

Also on exhibit will be relics of Dominican saints.

On display will be the commemorative stone for the beatification of Fra Angelico, the Dominican and Renaissance master whom John Paul II beatified and made Patron Saint of Artists. The UST campus building housing the College of Fine Arts and Design and the College of Architecture is now named after Beato Angelico.

Photos of martyrs of Japan and Vietnam, including San Lorenzo Ruiz and Blessed Pedro Calungsod, all of whom were beatified by the late Pope, will also be seen in the exhibit. “The Dominican fathers have thought about giving thanks to Blessed Pope John Paul II, especially now that he is beatified,” said Trota-José.

He added that UST has always been warmly associated with the Holy See, especially Blessed John Paul II, and an exhibit of papal memorabilia and relics would be a fitting close to the UST Quadricentennial and a send-off as well, as UST enters its fifth century.

“Ad Januam Coeli [To the Gate of Heaven]: A Commemorative Exhibit on Blessed John Paul II and the University of Santo Tomas” will run at the UST Museum until Feb. 10. It is open to the public.