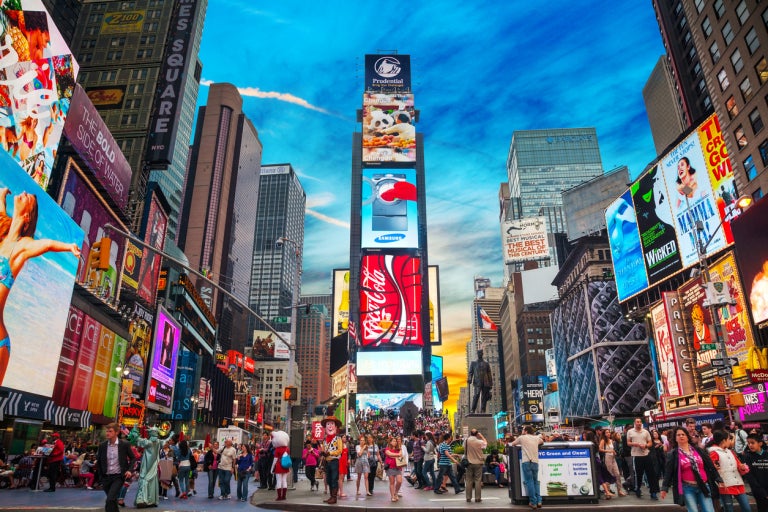 Start spreadin’ the news: when it comes to love songs about cities, there’s one that’s king of the hill.

In a ranking of the world’s most “sung about cities,” New York City took the top spot, followed by London, Los Angeles, Paris and Miami.

The list is based on lyrics from more than 200,000 English-language songs that charted billboards in the United States and United Kingdom since the 1960s.

With mentions in 161 songs, the Big Apple takes the lead as the city that never sleeps and for its “concrete jungle where dreams are made of.”

The report, released by Celebrity Cruises, offers an interesting look at the towns, cities, states and neighborhoods that have inspired some of the greatest hit songs across all genres of music.

“Music is inevitably tied to location,” notes Jon Stewart, at the British Institute of Modern Music Institute Brighton, in a statement.

“Who could imagine The Beach Boys without references to California? Without the geographical touchpoints found in Britpop, it simply wouldn’t make sense. And, how would the blues, country and rock and roll genres be received if they were stripped of all connections to the geography and politics of the American deep south that inspired them?”

Overall, the data found that 897 artists sang about 422 different places across 2,000 songs.

Meanwhile, the report also found that Canadian hip-hop star Drake is most inspired by the cities and places around the world, with 29 different destinations mentioned throughout his discography. While his hometown, Toronto, gets the most shout-outs, Drake also drops places like Versailles in France, Rotterdam in the Netherlands and Madrid in Spain throughout his songs.

The report also found that while New York, Los Angeles and London were popular cities across all genres of music, Georgia inspired folk and country music songwriters the most.

Texas gets the most love in R&B; California is most popular in jazz; and Kingston, Jamaica, Brooklyn and London are sung about the most in reggae.

The Top 20 Most Sung About Cities In The World:

The Top 10 Artists Who Mention The Most Places In Their Music:

Bangkok and Tasmania in list of top 10 wine getaways 2019