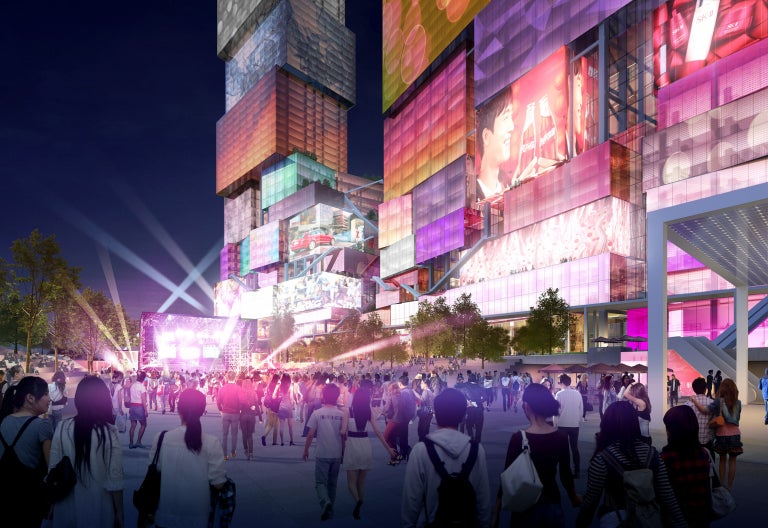 Architecture practice MVRDV has revealed its proposal for the Taipei Twin Towers, two buildings that have been imagined to animate, and illuminate, the central station area of Taipei.

At 337 and 280 meters, the towers are envisioned as stacks of blocks, many of them sporting interactive media façades, and together containing retail offices, two cinemas and two hotels, all built atop the city’s existing Main Station.

Down below, the bases of the buildings will create a retail area for pedestrians, while the higher blocks are intended to house the remainder of the towers’ offerings. Of the two planned hotels, one, set to crown the East tower, will cater to young, trendy travelers, while that in West tower will appeal to luxury guests.

At ground level, a sunken plaza will serve as a sort of archeological study, with structures marking the former locations of the original station, a plaza and old houses, while providing shade and hosting public events and other services.

Escalators and walkways will connect terraces atop the retail blocks, and an elevated walkway will connect the station with surrounding destinations.

Perhaps the towers’ most impressive feature, however, is their view from above. Standing high above the buildings surrounding them, the towers are designed to feature illuminated, interactive media displays, allowing them to serve as screens for cultural spectacles, sporting events and advertising.

“Arriving at Taipei Central Station is currently an anti-climax. The immediate area does not reveal the metropolitan charms and exciting quality that the Taiwanese metropolis has to offer,” said MVRDV principal and co-founder Winy Maas. “The Taipei Twin Towers will turn this area into the downtown that Taipei deserves, with its vibrant mixture of activities matched only by the vibrant collection of façade treatments on the stacked neighborhood above.” JB