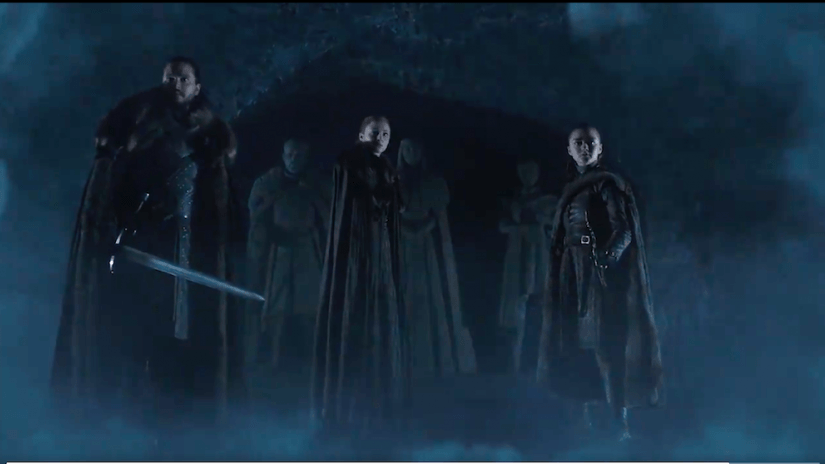 If anyone had not noticed yet, HBO is getting ready for the big premiere of the final season of “Game Of Thrones.” After more than a year without an “GOT” footage, we got the four-second teaser last week, and now we finally get the second teaser.

Of course, the big reveal is at the very end, when HBO announces that “GOT” season 8 will start airing on April 14, Sunday. It will air one episode every week for six weeks, meaning we can expect the series finale to air on May 19.

This second teaser trailer runs 1:45. It begins with a shot of Jon Snow walking through the Stark crypt at Winterfell with a torch in hand. He walks past a statue—Lyanna Stark’s statue. As he walks past, you can hear Lyanna’s voice, saying, “You have to protect him.” A feather falls from the statue’s hand and unto the floor. Jon stops and turns around, as if he can hear something. 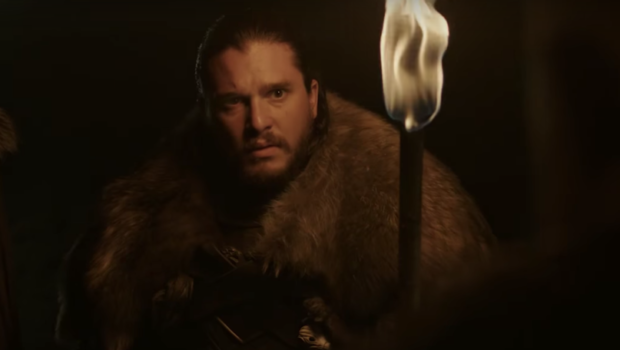 Then, we get Sansa Stark walking through the crypt as well. She walks past another statue—Catelyn Stark’s statue. We hear Catelyn’s voice: “What horrors have come to my family… It’s all because I couldn’t love a motherless child.”

As we hear the last part of Catelyn’s sentence, we see Arya Stark walking through the crypt.

Then, we focus on Jon again. He stops in front of Ned Stark’s statue. We hear Ned’s voice: “You are a Stark. You might not have my name, but you have my blood.”

Then we see Jon walking up to Arya and Sansa, who are already waiting for him. They turn to look at something with what looks like amazement and fear on their faces. 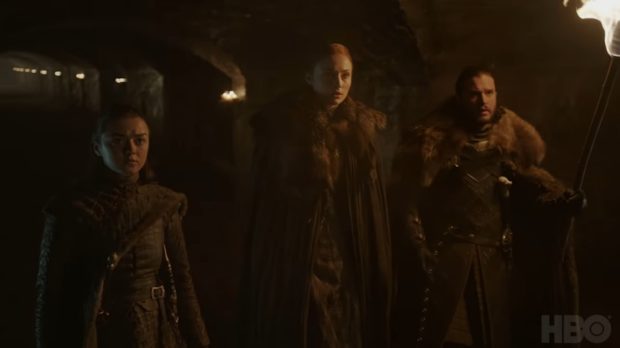 We see that they are looking at three statues in the crypt, one for each of them. 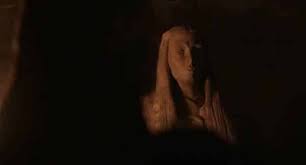 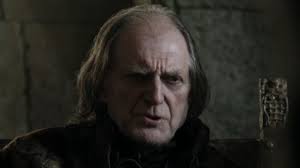 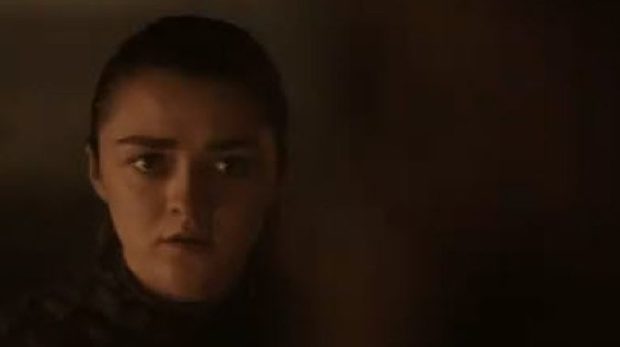 Then, the wind blows out Jon’s torch. The crypt is plunged into darkness.

We see a mist floating into the crypt. The feather on the floor turns to ice.

Jon and Arya draw their swords as they turn to the direction of the mist, which is now floating towards them. 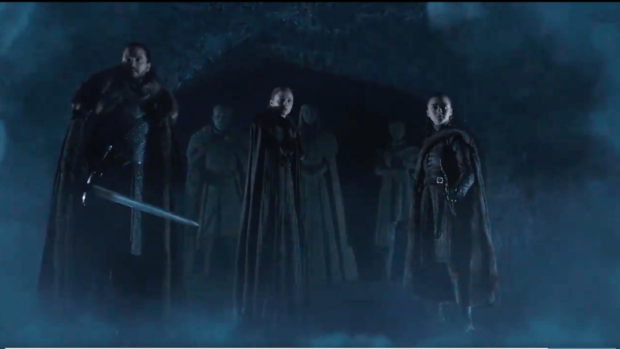 The very first question should be, is this footage from the show or is it an independent teaser that just hints at the show’s events. HBO did release a teaser for season 7 that was shot specially for that purpose and did not have any actual footage from any episodes.

That is the case here.

This scene looks unfinished, actually, and the visual effects don’t have that polish we usually see on the show.

Then there’s context. Jon and Arya have yet to meet on the actual show, a reunion we know should be both welcome and emotional.

This could be a dream sequence, as it seems to portend the death of the three Stark siblings shown here. That is an important prophesy, but it is very similar to that other famous “GOT” season 6 teaser, which featured the faces of main characters on the Hall of Faces belonging to the Faceless Men. That trailer didn’t appear in the episodes either.

It is safe to say this is exclusively a trailer, with a purpose of hinting at possible events during the season, not merely the death of the Starks but the themes and events indicated by the voices we hear.

On to the trailer itself.

The teaser calls back to the very start of the series, season 1, episode 1: “Winter is coming.” The crypts of Winterfell (also ostensibly the title of the teaser) were first seen when Robert Baratheon (Mark Addy) arrives at Winterfell and walks into the crypt with Ned Stark (Sean Bean). He walks up to the statue of Lyanna Stark (Aisling Franciosi). We know that Lyanna—Ned’s sister—was Robert’s great love and fiancée. Lyanna’s true love, however, was Rhaegar Targaryen (Wilf Scolding). When Rhaegar ran off with Lyanna and put her up in the Tower of Joy, Robert came after them and this eventually ended with the death of the star-crossed couple and the triggering of Robert’s rebellion. Ned got to see Lyanna right before her death from childbirth and she gave him her child with the words, “You have to protect him.” This child is Jon Snow (Kit Harrington), Lyanna’s son with Rhaegar.

We see the first part of this event through Bran (Isaac Hempstead Wright) and the Three-Eyed Raven (Max Von Sydow) in season 6 when Bran looks into the past, but the true revelation happens in season 7 episode 7, “The Dragon and the Wolf.”

We know now that Ned carried out his promise by bringing Jon Snow (the surname given to bastards) to Winterfell, claiming he had fathered Jon during the Rebellion, something that his wife Catelyn (Michelle Fairley) resented.

Robert never knew of Jon or the reality that Lyanna had run off with Rhaegar. He believed that Rhaegar had raped Lyanna and killed her. Thus the visit to the Crypts. Robert said that Lyanna should not have been buried in that place, that she should have been buried on a brightly lit hill. “She’s my sister. She belongs here,” Ned answers. “She belonged with me,” Robert shouts. Robert leaves a feather in the hand of the statue during this visit. That is the same feather than falls on the ground when Jon walks past the statue.

The words that Catelyn says in a ghostly voice are from season 3 episode 2: “Dark Wings, Dark Words.” She is sharing deep truths with Talisa (Oona Chaplin), the pregnant wife of her son Robb (Richard Madden). The line “What horrors came to my family” is a portent of the fates that will befall her children, or what she thinks will happen: Robb murdered at the Red Wedding, Sansa essentially held captive by King Joffrey Baratheon (Jack Gleeson) at King’s Landing, Arya, Rickon and Bran thought dead. She did not even know how much worse things would get, but she also did not know that Sansa would escape King’s Landing to become Lady of Winterfell, very much a woman after her mother. Catelyn truly had no idea that Arya would survive to be trained as an assassin, in other ways, very much like her mother as well. Bran, well, nobody could have predicted what happened to Bran.

This brings us to the line, “it’s all because I couldn’t love a motherless child.” This is in the latter part of Catelyn’s discussion with Talisa. She is talking about how she hated Jon when Ned arrived with the baby, how she had wished Jon died of a sickness he survives. At this moment, she regrets having treated Jon so badly because she resented that Ned could have loved the unknown woman so much. We know that Ned really did love the woman, but that was because it was his sister, Lyanna. It should be noted that the great tragedy of Catelyn’s life was that she died never knowing that Ned had never been unfaithful to her, all because she never knew of Jon’s true parentage and Ned could never tell her.

Arya (Maisie Williams) looks amazing in the rich furs of Winterfell. We’ve gotten used to Sansa wearing these house furs, but not Arya. It is a bit of start to see Arya so grown up and now so confident.

We are all to familiar with Ned’s statue. Every Stark who dies is buried in the crypts of Winterfell and given a statue. We first saw this statue after the body was brought back there. Sansa went down there when she first returned.

The line that we hear—“You are a Stark. You may not have my name but you have my blood”—is what Ned tells Jon before Ned heads up south to King’s Landing. That discussion ends with Ned telling Jon they will talk about Jon’s mother when Ned returns. We can see then that Ned fully intended to tell Jon about his being the son of Lyanna and Rhaegar, but Ned never came back from King’s Landing and Jon went on with his Night’s Watch tour not knowing the truth. This is the secret that drives the show, truth be told.

The appearance of the three statues is a warning to the three siblings, a warning that they may yet die in the coming war against the White Walkers, or the war that may happen after that, most likely against the treacherous Cersei Lannister (Lena Headey).

The cutaways show Jon unsheathing Longclaw and Arya unsheathing Needle—thought we can see her Valyrian steel dagger on her belt. This shows the two are ready to fight. Sansa might not have drawn a weapon, but we know she doesn’t need one. She is a leader and thinks her way through conflict, which is how she dealt with both Ramsay Bolton (Iwan Rheon) and Littlefinger (Aidan Gillen).

This scene is symbolic of the fight the three Starks are going to fight—together. We know about the tensions between Arya and Sansa and those between Sansa and Jon. The scene reminds us that they are still Starks and recall the Stark belief,“The lone wolf dies but the pack survives.” It is a reinforcement of the fact that these three will always side with one another in conflict, an important thing in the fight against the White Walkers.

Though it seems too small a detail, we should discuss it because this is an over-analysis after all. The Arya and Sansa statues seem to depict the sister as they are, but the Jon one looks much older. Does this indicate the sisters will die as they are now, but Jon will survive much longer? Remember the statues in the Winterfell crypts depict the Starks as they looked when they died. We could, however, chalk it up to this merely being metaphorical and that Jon simply had a less-talented sculptor for his statue.

Also, where are the statues for Robb and Rickon?

The most interesting omission here is that we are missing one Stark sibling: Bran. We know that at the end of season 7, Bran was at Winterfell with Sansa and Arya; their reunion was far less emotional and quite bizarre, though it did allow the Valyrian steel dagger to pass from Bran to Arya.

This makes sense because the teaser doesn’t happen in reality, otherwise Bran should be there in his Professor X-style wheelchair. He could go to the cypt, if he really wanted to.

No, the reason Bran is not there is because his path is divergent to those of the three other Starks. Bran will not be “fighting” the Night King the way the other three will. He will have a different path, one that will take him beyond time and this pushes that theory that the Song of Ice and Fire is actually being told from Bran’s point of view as the new (or old) Three-Eyed Raven.

We should expect that the next trailer from HBO—probably in February—will have real footage from the season 8 episodes. This teaser—and the one before it—is whetting our appetites by hinting at the themes connected to the coming season, without really showing us too much.

The countdown to season 8 begins: 90 days to the start of the final season.