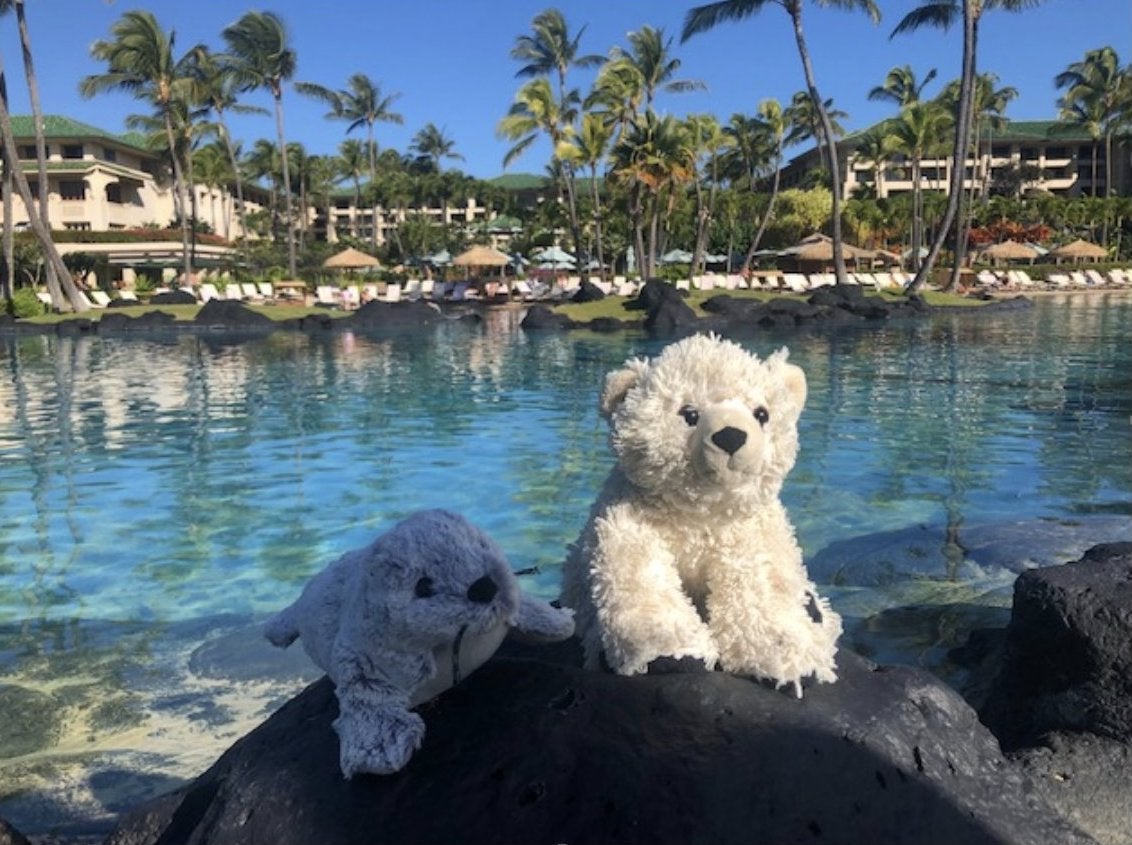 LOOK: Stuffed toys treated to ‘extended vacation’ after child left them in hotel

As a child, the fear of losing a beloved toy is one that could be a source of heartbreak.

When one mom from the United Kingdom realized that her young son left his stuffed toy at a hotel in Hawaii, she anticipated him to be devastated.

Anna Pickard, head of brand communications in Slack, emailed the Grand Hyatt Kauai on Jan. 7 to ask if the staff had seen the toys of her son — whom she called by the pseudonym Doozer — which were a white teddy bear named Sutro who had a “friend,” a white seal stuffed toy.

She was delighted not only at their quick response and a promise to mail back the toy, but also in that the staff took the effort to share updates about the toys’ whereabouts in the form of pictures around the resort.

“Not only had they found Sutro safe and would be posting him back, but they sent updates so Doozer could see what he’d been doing on his extended vacation,” she said. “Apparently having first visiting the laundry, he’s been at the spa.”

They emailed back. Not only had they found Sutro safe and would be posting him back, but they sent updates so Doozer could see what he'd been doing on his extended vacation. Apparently having first visiting the laundry, he's been at the Spa. pic.twitter.com/rFhK6m9LVI

As per the emails, it was the laundry staff who had spotted the toys and cleaned them. After which, the toys were posed on a lounge chair by the pool, then took a visit to the nail spa.

It looked like Sutro and his friend had a swell time basking in the sun and even rented a cabana by the seaside, posing a funny problem for Pickard. “Now I’m going to have to explain why I kept telling Doozer we couldn’t afford a cabana, but… his bear can?”

Other staff members posed with the toys too, such as a gardener and front desk staff.

Rather than be upset that they had been left behind, Doozer was not only enamored by his toys’ adventures, but even jealous.

Pickard recounted some of his questions: “HEY I DIDN’T GO TO THE SPA!?! Is he going to come back with his nails painted [do] you think? What colour? How did he pay for the cabana? With the money we left in the room every day?”

Before leaving, the two toys even “checked out” of the resort, as seen in a picture of them being entertained at the front desk.

As of Jan. 10, Pickard confirmed that the toys had arrived and that her son was “so sodding happy.”

Tiny dude wasn't being very happy about posing for photos this evening, I'll try again tomorrow, but even if I don't, he's so sodding happy to have Sutro home (and I'm not adding these to the original thread because… because. This is us. Not #content) pic.twitter.com/MX0mQNhXMq

The hotel replied to the thread with well wishes: “We’re glad Sutro got to enjoy an extended vacation with us. I’m sure he will have lots of stories to share with Doozer when they’re reunited.” JB

Interns with Down syndrome get trained in Davao hotel