Public bathhouses in Kyoto a hot spot for all | Lifestyle.INQ ❮ ❯ 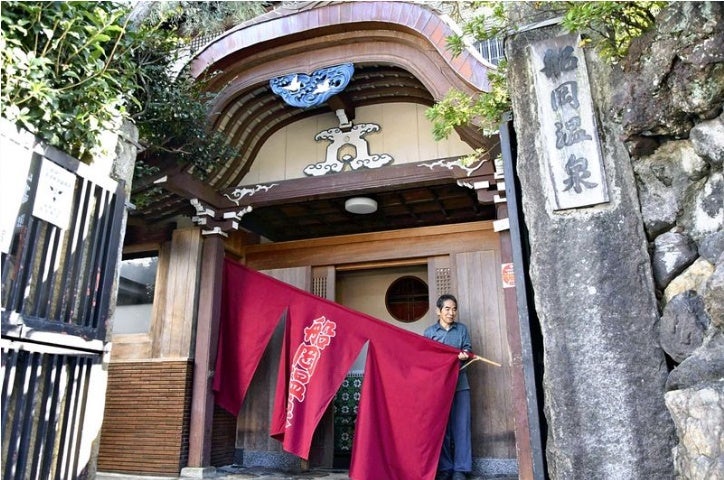 Yoshio Ono hangs a noren curtain at Funaoka Onsen bathhouse before it opens for the day in Kyoto. The Japan News/Asia News Network

Public bathhouses in Kyoto a hot spot for all

KYOTO — About 100 public bathhouses are still in business in the city of Kyoto, these remnants of what used to be a student town blending with the elegant old city. I visited several public bathhouses there recently where customers can enjoy the atmosphere of the old days.

At a shopping district on Kuramaguchi-dori street located to the north of Kyoto Gyoen National Garden, the Funaoka Onsen public bathhouse draws the eye with its massive entrance featuring a karahafu — a gable with an undulating curve at the top — which has become a symbol of the street in Kita Ward.

Funaoka Onsen was built in 1923. In 2003, it became the first public bathhouse in the city to be registered as a national important tangible property.

After I passed through a reddish brown noren curtain outside the entrance, the gorgeous interior decorated with colorful tiles jumped out at me. On the ceiling of the dressing room was a carving of Kurama Tengu, a long-nosed mythical creature said to have inhabited Mt. Kurama.

A ranma carved wooden panel on the wall between the men’s and women’s dressing rooms depicts the 1932 Shanghai Incident, a relic of bygone days.

The first head of the establishment, Matsunosuke Ono — who made his fortune as a stone dealer — initially opened a restaurant and inn. In the year after the Shanghai Incident, his son Goichiro started the bathhouse service. Now the family operates just the public bath.

“I heard Matsunosuke was an intrepid person. He decided to illustrate on the ranma the Shanghai Incident, in which Goichiro was shot and injured,” said Yoshio Ono, 85, the fourth-generation proprietor.

What caught my eye in the ranma carving was the depiction of “three brave soldiers,” as they’re identified, a scene of Japanese soldiers who rushed the Chinese military carrying a bomb.

Yoshio explained the reason why there were so many public bathhouses, saying: “Few houses had a bath at that time. Also, Kyoto was a student town, and many students lived in boarding houses.”

“Recently, it’s not unusual to see foreigners with a guidebook passing through a public bathhouse’s noren curtain,” he added. Public bathhouses seem to have become tourist attractions.

In the evening, I went to Nishiki Market, known as “Kyoto’s kitchen,” in Nakagyo Ward. The street lined with shops selling Kyoto foodstuffs was jammed with so many tourists, I couldn’t walk straight through the crowd.

From Nishiki Market, I walked a little ways along Sakaimachi-dori street, and found the character “yu” (bath) printed on a noren curtain hung at a two-story townhouse. Nishiki-yu is a public bathhouse that opened in the early Showa era (1926-1989).

I opened the sliding door of the bathhouse with a loud clatter. In a changing room, I found a rattan mat spread on the floor and long-used wicker clothes boxes woven from willow twigs, evoking the Showa era with a rustic charm.

People working at Nishiki Market came to the bath after work. They’re familiar with the person sitting in the bandai bathhouse custodian’s seat, so there was cheerful laughter and chatting in the changing room.

“It’s not easy to repair this old building again and again, but I’m trying to maintain this bathhouse at any cost,” said Nishiki-yu owner Yasuo Hasegawa, 71. “It’s a meeting place for neighbors, and I want children and young people as well to become familiar with the public bathhouse culture.” On Hasegawa’s face, I could see his desire to protect the good elements of old-style Kyoto.

As Nishiki-yu wants visitors to feel comfortable with sento public baths, it plays jazz music in the changing rooms, and sometimes holds rakugo comedy shows where the audience tips the performer, as well as concerts. Nishiki-yu welcomes various guests, including foreign tourists with tattoos.

“While protecting its tradition, Kyoto has developed by absorbing new cultures as well. Cultural diversity is important. I believe everyone will find their own favorite bathhouse in Kyoto,” Hasegawa said.

I felt a bit dizzy after taking a hot bath. As I left the bathhouse, I realized it was well into the night. I enjoyed the night breeze gently blowing through my wet hair while walking in the market where the crowd was gone.

At Kyoto Tower in front of JR Kyoto Station, visitors can enjoy a 360-degree view of the old city from the observation deck located 100 meters above the ground. The tower is well known as one of the landmarks of Kyoto, and there is a public bathhouse called YUU in its basement. The bathhouse is popular among tourists who arrive in Kyoto by night bus. It is open from 7 a.m. to 10 p.m. Admission is ¥750 for weekdays and ¥890 on Saturdays, Sundays and national holidays.