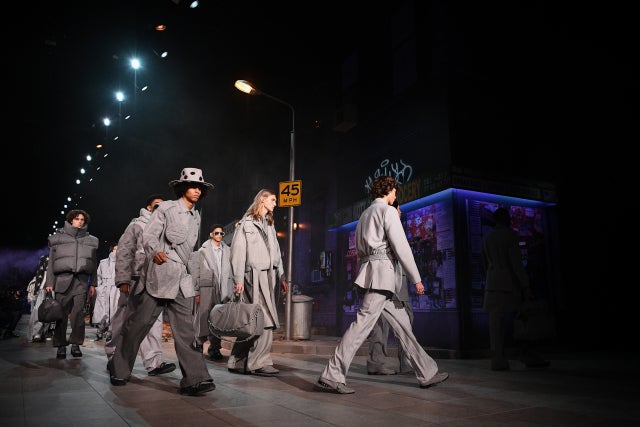 Virgil Abloh paid tribute to Michael Jackson — a fellow African American from the Midwest whose “prodigious talent catapulted him to unparalleled fame” — in his Louis Vuitton show Thursday at Paris men’s fashion week.

The designer — the first African American ever to lead a major Paris label — did not make a direct comparison between himself and the “King of Pop”.

But there was plenty there for those wishing to read between the lines.

The 38-year-old’s bravura celebrity-studded show for his own ultra hot Off-White brand had already hogged the Paris limelight Wednesday.

And his Vuitton show Thursday in the gardens of the former royal Tuileries gardens confirmed the streetwear guru as the new pretender to the title of king of the catwalk.

Abloh threw down the gauntlet by sending out a sparkly Michael Jackson white glove as his invitation to the show.

He penned a long tribute to Jackson, “a universally relatable marvel” as the keynote to the collection, and posted a poem he wrote about him to his 3.4 million Instagram followers.

He even included the flag of the singer’s home state, Indiana, in one of the pleated “flagification” pieces which brought a splash of vivid colour to an otherwise chromatically restrained collection.

Abloh, a renaissance man who studied architecture and engineering before switching to fashion to work with his friend rapper Kanye West, was born in neighbouring Illinois.

As well as a run of sparkly and jewel-encrusted Jackson-style gloves, he sent out a jumper, hoodie and a shirt and trousers with cartoon figures inspired by “The Wiz”, the 1978 all-black musical version of “The Wizard of Oz” which had Jackson as the Scarecrow and Diana Ross as Dorothy.

The Iron Man also made an appearance in the guise of a hooded aluminium foil knee-length coat worn with similarly reflective sunglasses.

Abloh also made a nod to the legendary three-zip red jacket worn by Jackson in the video for his megahit “Beat It”.

But the designer — whose parents are from Ghana — showed he was not afraid to take a knife to the heritage of the Paris house, which has often played with colonial chic.

To show that the roles have changed, Abloh had one black model head off on his travels with a Vuitton bag wearing a safari hat, desert boots and a quasi-military camel suit.

A US eagle padded patch on the chest with a Statue of Liberty flame on the belt hammered home the point.

This Paris fashion week has been something of a storm of the bastions by a rising tribe of streetwear-savvy designers from the US, Japan and China.

Three of the rising Americans — Abloh, Heron Preston and Alyx’s Matthew Williams — are close friends have previously worked with West, who has long nurtured the ambition to lead a major brand himself. CC