Running as a game? In this Web platform, it is | Inquirer Lifestyle ❮ ❯ 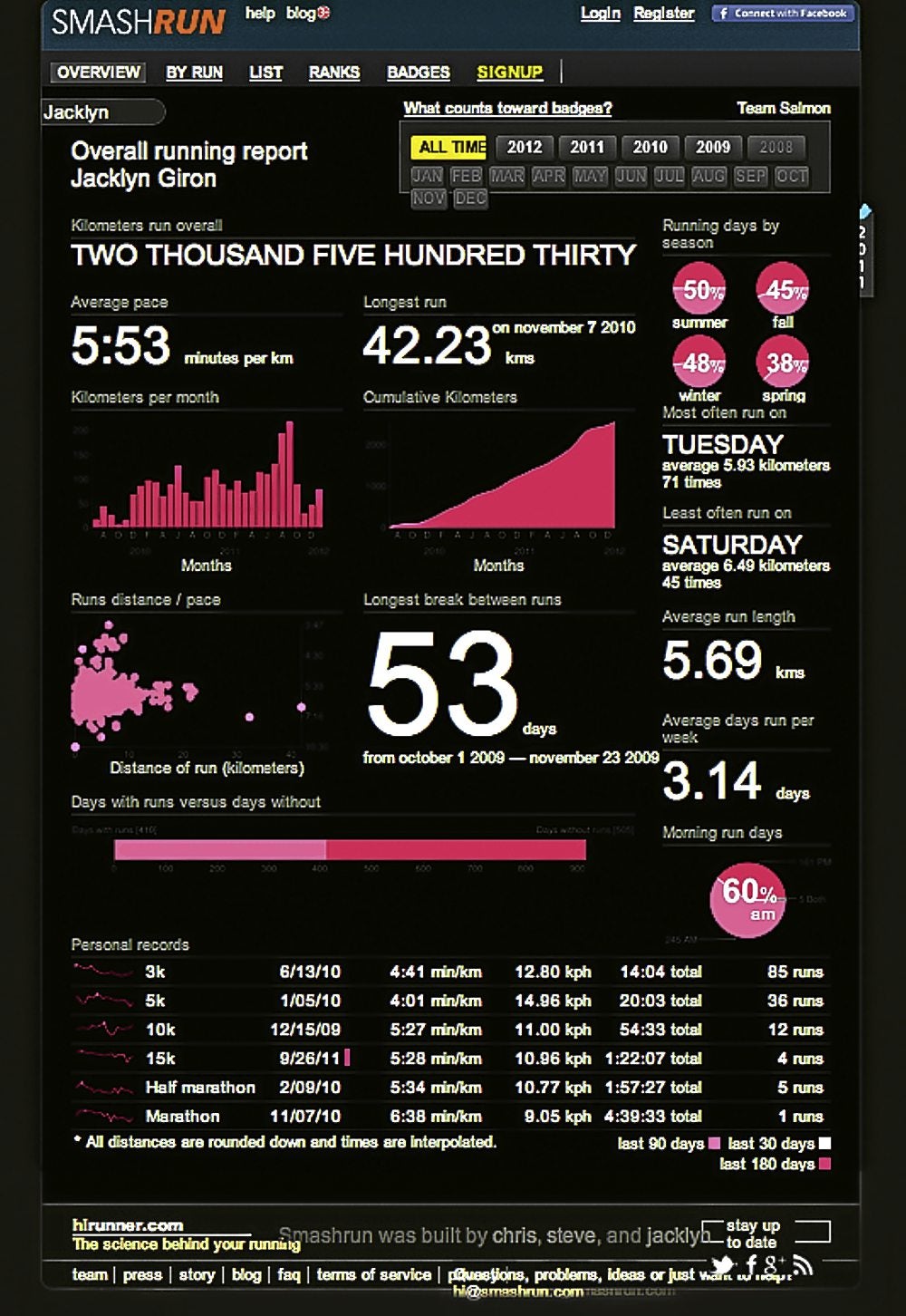 Running as a game? In this Web platform, it is

Three gaming superheroes from Brooklyn, New York, just made logging in those runs more fun and interesting. By developing a shareable dashboard that aggregates your run data into a sleek, comprehensive analysis, they are also introducing the addictive and competitive elements of video games into the platform.

Get ready for the gamification of your runs at www.smashrun.com, where you earn badges and medals and get to compare your ranking with peers and everyone else around the world. Even better, it’s free.

Ever wondered how previously “normal” people get hooked on video games that make them do mindless tasks, like clicking coins or cooking ramen? They’re rewarded. The little things they earn at the end of each level give them a sense of accomplishment. And that makes them come back for more.

Imagine, then, that formula on a running website, where the badges and medals serve as layers of reinforcement.

Smashrun has found a niche, and gamification, without a doubt, is one of the reasons that have boosted the site’s popularity over the years.

It started as a personal project in 2009 with Giron’s fellow runners, gamers and friends Chris Lukic and Steve Craig. Smashrun was borne out of frustration with flash-heavy sites (like Nike+) that are too buggy, sites that keep on accidentally logging you out or crash often.

While users get badges for running their first mile, or first 5K or 10K, there are also quirky badges, like Early Bird, Lunch Hour or Night Owl badges, for people who run early, who run during lunch break or who run after office hours.

“You need to log in 10 runs to earn those badges, I think, and we do have plenty of users who have all three. Badges serve as milestones for running achievements. People who normally run in the evenings are suddenly running early in the morning just to earn the badge,” she said, laughing.

The milestones are closer to each other, too, so that earning those badges and medals do not feel like a Herculean task each time. It’s also so you won’t get bored with running, she said. There are really tough badges to earn, too, like finishing a marathon under a certain time (like the sub-3 NYC marathon record of then nine-year-old Wesley Paul).

There are 40 badges, but currently they are developing a hundred more, with almost half of that to be released in the next four months.

“We do have some ultra-marathoners who have already earned all 40 badges. To some people, it’s just fun to earn badges, but to many people that is a big deal. There’s that sense of accomplishment when you are recognized for your first mile-long run, or if you ran five days in a row. You keep running and you keep earning badges,” she said.

If you have friends on Smashrun, you can also rank yourself among them and check who runs faster, who runs more often, who runs longer.

What it does do is give you a context for your run: “Finishing that run today meant that you’ve run 280 miles this year. That puts you in the top 20 percent of the runners on Smashrun. It’s more than 50 miles farther than you’d run last year at this time. And it was the third fastest 4-mile run you’ve ever run. You’re running twice as many miles a week as your friend Joe, and when it comes to sheer discipline—showing up day in and day out—you have few peers.”

Smashrun integrates smoothly with Nike+. Follow the instructions on the site and in minutes you can see your running history stored in Nike+ charted right in front of you. That easy—and fast.

“In two weeks, Giron said they will be testing Garmin’s integration into Smashrun. How well that test goes will determine how soon Garmin will be officially integrated into the site. When this happens, she said, it will be easy to integrate other apps because most of them use the same file extension to store data.”

You can share your dashboard on Facebook, and even write down your personal message along with it in the User format: “This afternoon at 4:25 p.m. ran 5.1 miles at 8.57/mi—zoom! Zoom!—I think I deserve a beer.”

“We released our Twitter functionally; it allows our users to tweet their 2011 running report, which no one else currently does… Surprisingly a lot of different platforms charge users to generate a report. It’s something you get for free on Smashrun. We’ll never charge for that. It’s your data. If you want to post or share it go right ahead,” Giron said.

Smashrun is not a mobile running app. It is a Web platform that gives you an in-depth analytical data of your runs, fast and easy. You can also choose to manually log in your run data.

Smashrun will also soon have individual user profile pages where you and your friends can post messages.