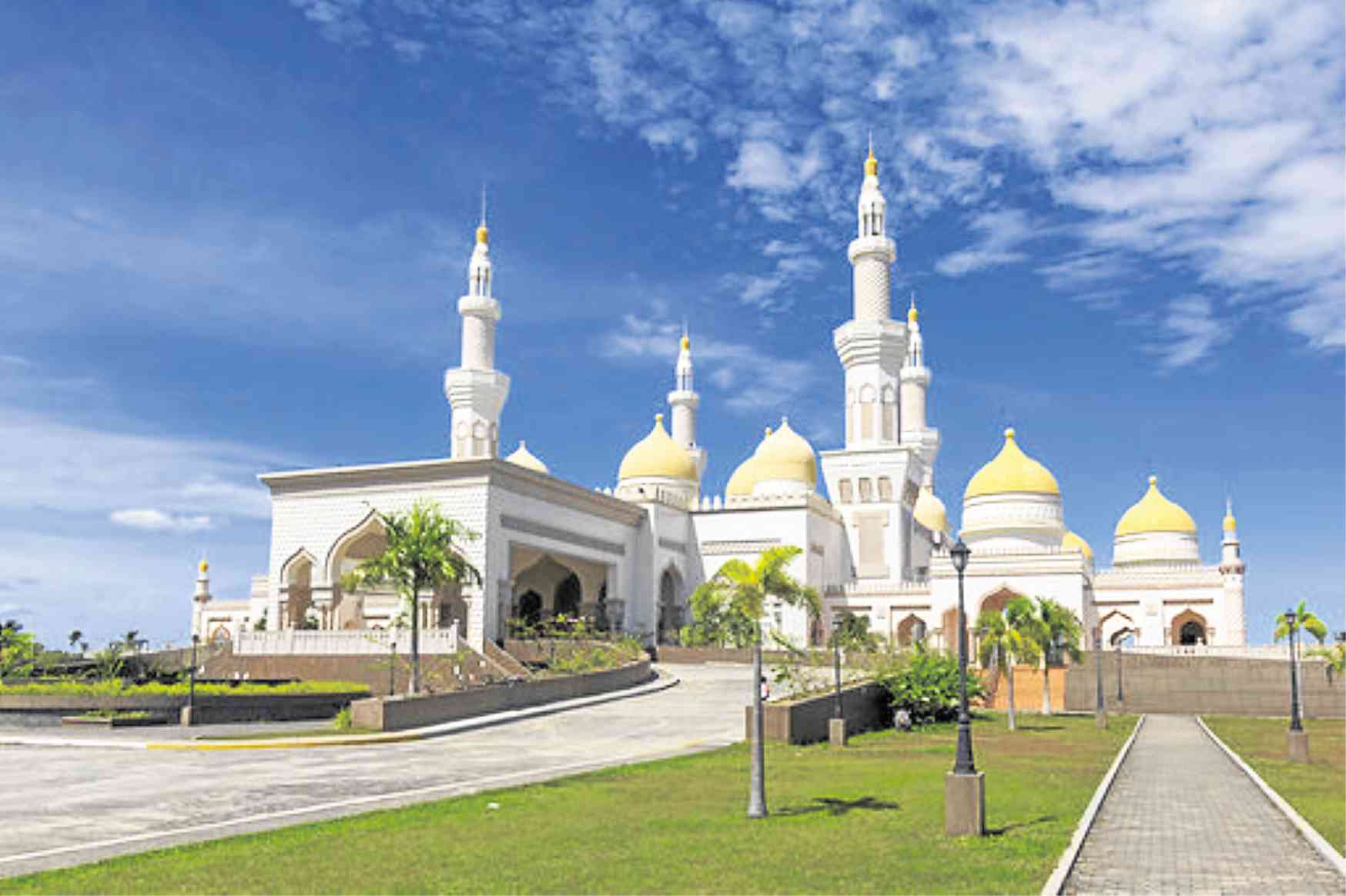 The Sultan Haj Hassanal Bolkiah Mosque, also known as the Grand Mosque of Cotabato, was financed by the Sultan of Brunei and is the largest mosque in the Philippines.

Welcoming visitors in Cotabato City approaching Pedro Colina (PC) Hill is a cluster of kaleidoscope-colored houses, with design elements of its cultural symbols, ginaukit (a fleet of Muslim boats), gongs and crabs.

PC Hill is one’s introduction to the city’s history. Its elevation made it a convenient fort. Natives used it as vantage point to watch out for intruders. It became known as Kutang Bato, thus, the name Cotabato.

Cotabato City is the center of the Autonomous Region in Muslim Mindanao (ARMM). It is not to be confused with its namesake province. Cotabato City is actually located in Maguindanao, although it’s independent of that province.

Well known for seafood such as mud crabs, milkfish and prawns, Cotabato City is likewise becoming known for halal food manufacturing. Halal is meat that conforms to Islamic laws.

Aside from the continued operations of homegrown malls Al Noor and South Seas Complex (the city’s largest and oldest shopping center), Cotabato City’s retail business is thriving with the entry of City Mall, Robinsons Department Store and Supermarket, and Puregold.

As a tourist destination, Cotabato City is known for a number of historical landmarks.

The Grand Mosque, in Barangay Kalanganan near Tamantaka River, was built by Sultan of Brunei Haji Hassanal Bolkiah. It is the Philippines’ largest mosque. Muslims appreciate the peaceful vibes of its cavernous halls.

The Tamontaka Church was built in the late 19th century and became the center of Jesuit evangelization. In the 14th century, a Malaccan prince, Shariff Muhammad Kabunsuan, sailed to Mindanao, arrived on the banks of the Rio Grande, and taught Islam. He founded the Sultanate of Maguindanao.

An earthquake and fire destroyed parts of Tamontaka Church. Thankfully, workers have maintained its original façade and a tunnel that connects to a catacomb.

The tunnel, which is part of a labyrinth of caves, leads to PC Hill. Locals who didn’t convert to Christianity found refuge in the caves, including the Kutawato or Kutang Bato Cave in the middle of the city.

The Pakarajaan (merrymaking) festival here runs from April to December.

A stroll on Bai Walk along the banks of Tamontaka River offers a refreshing view of the sea and mangroves.

Cotabato City’s culinary scene is alive despite the influx of fast-food franchises. Pastil, a household staple, is rice with chicken or beef adobo strips, wrapped in banana leaves.

Kalintubo is rice with marinated chicken cutlets or chicken liver, and wrapped in a cone-shaped banana leaf with the meat peeping out.

Sinina is beef or goat meat stew, made with coconut milk and complemented with palapa, a condiment of white scallions, chili and ginger.

A meal is capped with dodol, a sticky dessert of coconut milk, sugarcane crystals and rice flour cooked for nine hours.

Tinagtag is rice fritter, finely ground rice, sugar and water. The batter is placed on a coconut shell strainer which shapes the rice noodles.

There are grill joints near Rizal Park, which is also on Sinsuat Avenue.

Al Noor Hotel and Convention Center is the best place to stay for its location on Sinsuat Avenue.

For the budget-conscious,  EM Manor Hotel and Convention Center is a good alternative.