With ‘The Revolutionists,’ dramatic readings could well be a local theater habit | Inquirer Lifestyle ❮ ❯ 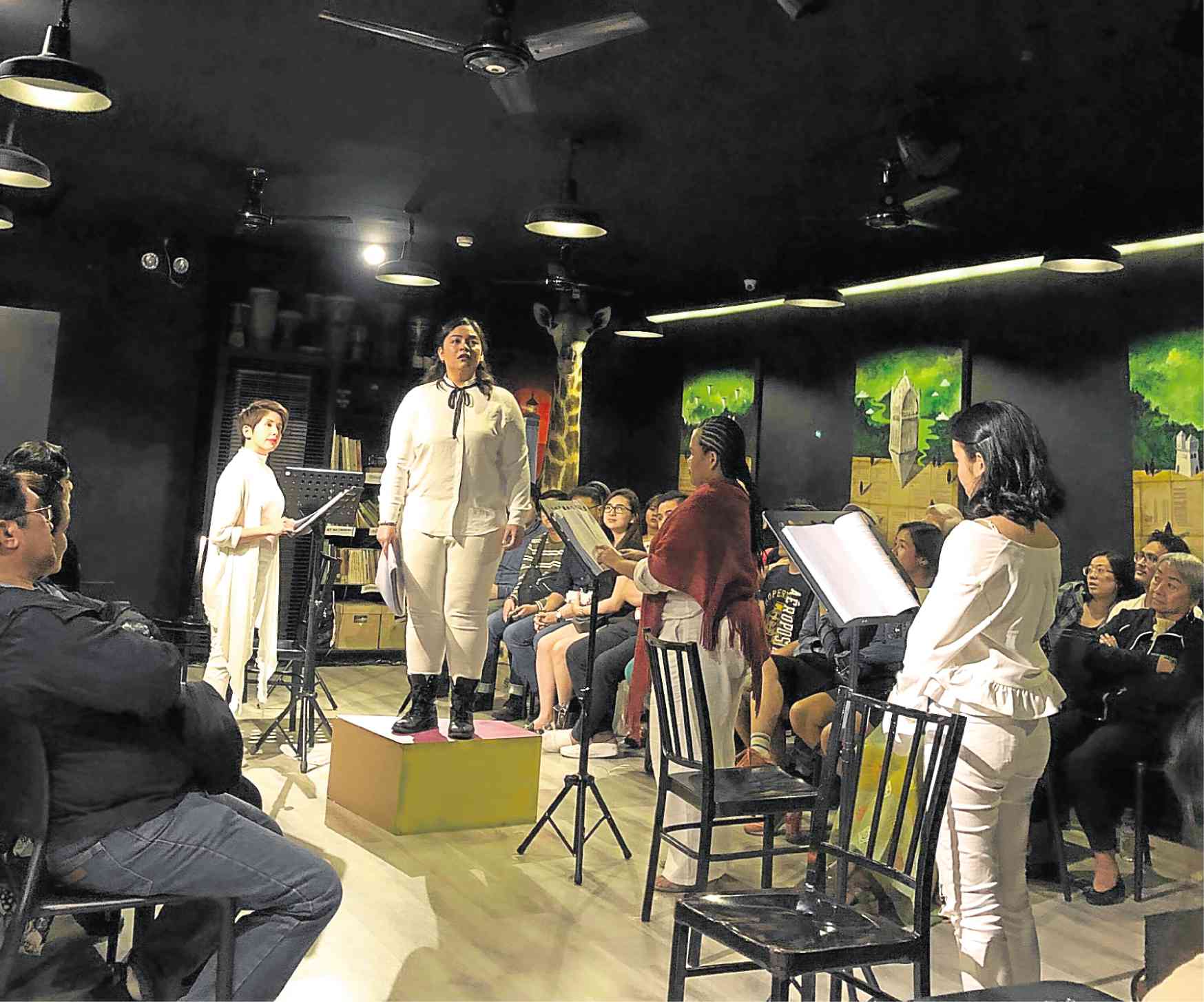 The cast of “The Revolutionists” —Wanggo Gallaga

With ‘The Revolutionists,’ dramatic readings could well be a local theater habit

Dramatic readings, though part of the theater scene for some time now, have necessarily been marginal to the larger world of local theater. Enter the Company of Actors in Streamlined Theater (CAST), which last week launched its second season of staged readings with a spectacular first offering.

The material was Lauren Gunderson’s “The Revolutionists,” a mind-bogglingly inventive exercise in conflating historical and contemporary zeitgeist.

Set in the middle of two epochal, bloody upheavals—the French Revolution and the Haitian Slave Revolution—it superimposes an intriguing (if premature) proto-feminist consciousness over debates on art and life, the personal and the political, creativity and social responsibility, wrapping everything up in sometimes wildly imaginative meta-theater.

The script is hugely entertaining as it pits actual historical characters such as Marie Antoinette, Charlotte Corday and the obscure writer Olympe de Gouges, as well as a fictional anti-slavery activist named Marianne Angelle, against each other in totally imaginary encounters.

But Act 2 segues into darker, more anguished territory, and all through the play, the specter—and then the actuality—of the guillotine looms.

It is all invigorating mentally and emotionally, though sometimes the complexity of the play’s several levels seems to result in overly improbable and too didactic, even facile, moments (such as the funny but out-of-place snatches from the mega-hit musical “Les Miserables”).

This writer, however, did not expect that a reading, with only elementary costumes and no set to speak of, with the players moving about with scripts in hand or set out in front of them, could give as full a theatrical pleasure as any fully mounted spectacle.

The marvelous direction was by Maronne Cruz and Jill Pena, who worked with a conjunction of material complexity and inherent design limitations, and squeezed tremendous performances out of their four-woman cast, all riveting whether in LOL comedy or passionate conflict.

Gabby Padilla was the heartbreaking assassin Corday; Jenny Jamora rendered an oddly sympathetic dimension to what should have been an outrageously shallow Marie Antoinette; Sarah Facuri was the central conflicted Olympe, with her dithering idealism as both feminist and artist; and, perhaps most memorably, Bituin Escalante was Marianne, complexly nuanced as both political and racial outsider.

Much enjoyment came from the sharply performed comedy, but the most powerful moments were Escalante and Facuri’s gripping, second-act confrontation and the hauntingly moving closing song serially sung by all four.

It’s almost outrageous that this experience was limited to only two performances over a single day. But if this reading should serve as an approximation of its future offerings, CAST should well and truly be on the way to establishing readings as a vital feature of our theater scene. —CONTRIBUTED