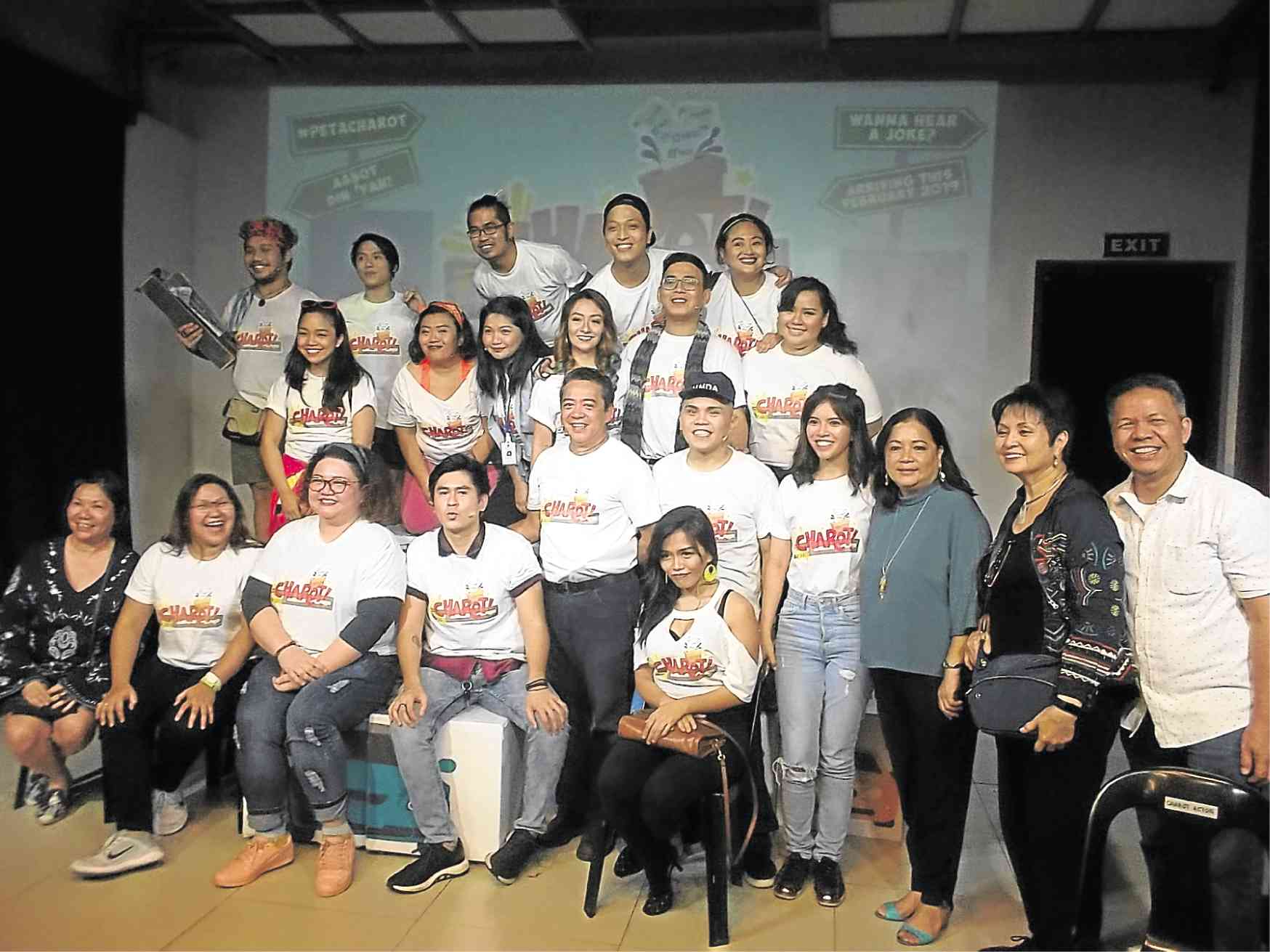 The Philippine Educational Theater Association (Peta) is in the midst of its series of post-50th anniversary presentations known as the “Stage of the Nation.” And one of the highlights is a new musical play, a political satire titled “Charot!” This is the Filipino colloquial  slang for “just kidding.”

A wild 30-minute excerpt from the play was presented in a recent press conference at the Peta-Phinma Theater in New Manila, Quezon City.

It is May 2020 in P.I., the afternoon of plebiscite elections  which will decide whether or not the country will vote for charter change and establish federalism.

A group of citizens on their way to the polling precincts are stuck in fearful traffic in what is no doubt Edsa. There is much wailing, screaming, singing and dancing, and outrageous overacting.

A father figure, in a nondescript barong Tagalog with the sleeves rolled up, appears, makes a mother political statement, grabs hold of a woman near him and kisses her on the lips. Then we hear the roar of a helicopter à la “Miss Saigon” and the trapped commuters think they will be rescued, until a man appears with a toy chopper.

You can interpret it as a metaphor for the country, “stuck” in a gridlock, unable to move forward.

After that climax or anti-climax, the young hosts embarked      on a “mentimeter game,” asking pointed questions on the screen with the media replying through their smartphones.

Most answered that social media occupied much of their time, they were against the TRAIN law, the top newsmakers of 2018 were Duterte and Trump   because “pareho lang sila” (same banana).

The top three issues in the Philippines are traffic, killings and corruption. Other concerns are fake news, disregard for human rights and economic issues.

“Charot!” was written by millennials for millennials and everyone else who is concerned and angry about what is happening in the country today.

The writers are J-mee Katanyag and Michelle Ngu, with Maribel Legarda as director, Vince Lim as musical director-arranger and Ian Segarra as choreographer.

In discussions after the excerpt, cast member CJ Novato of Star Magic, who plays millennial boy, noted that “I’m tired of the system, so it’s enlightening to be in a play like this.”

Peta executive director Beng Santos-Cabangon said that “through the arts we can find the path to what is happening now, and more importantly find inspiration. Where there has been silence, let the arts find a voice.”

Director Legarda said, “We should think about the things that will affect us, like charter change. We have to make choices.”

After “Charot!” the “Stage of the Nation” continues with Dulaang UP’s “The Kundiman Party,” Manila Improv Festival 2019, Words Anonymous and a “Human Rights Film Festival.” —CONTRIBUTED