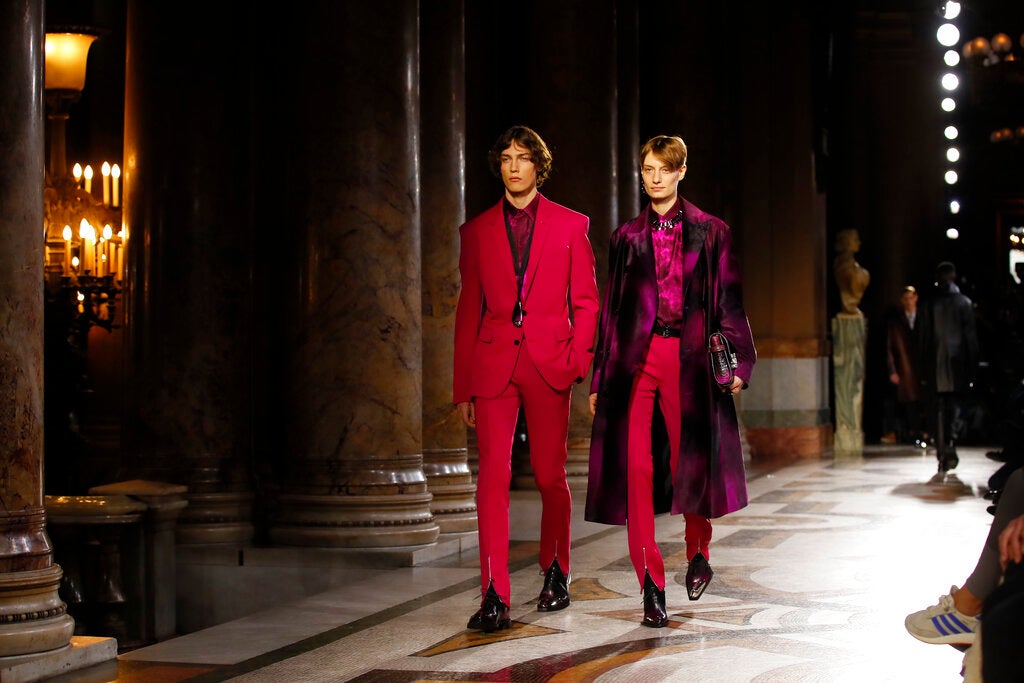 Dior pulls the stars in conveyor-belt menswear show in Paris

PARIS — The black box construction branded “DIOR” was so big it obscured the view of the Eiffel Tower.

The sheer scale of menswear designer Kim Jones’ pop-up venue of 2,840 square meters (30,570 square feet) could only mean one thing: he was competing for show of the season on Friday at Paris Fashion Week.

Here are some highlights of the day’s fall-winter shows.

At Dior Men, a snaking, meter-wide conveyer belt began moving to thumping music as models in dark, shimmering and couture-infused looks filed by.

In the presentational style, Jones made a welcome ironic comment on the commercial nature of ready-to-wear. But this superlative display needed no gimmicks to please.

A romantic sash was slung over a double-breasted charcoal suit at the chest and hip in a feat of accomplished styling — and one that harkened to couture draping.

A contemporary version of 19th-century spats — banding across the ankles — and arm-length leather gloves added to the show’s romantic, almost swashbuckling, mood.

Jones added an edgy interpretation to the strict codes of Christian Dior, the designer who died in 1957, by translating his obsessions. Dior’s love for big cats became a white tiger fur T-shirt hybrid.

The late designer’s penchant for superstition became charm bracelets, and his initials a “CD” fastening on a safety pin. Dior’s love of art became a sparkling print of a frowning Mona Lisa on a shirt, jacket and sweater.

The entire display maintained a brooding quality, thanks to the insistence on couture-style cashmeres, silk-satin and furs.

After much creative change at the top of the LVMH house, Berluti — the one-time boot-maker — seems to have found its footing.

Berluti, which started a clothes line in 2011, has cut a corner for itself in the menswear luxury market for its eye-popping hues.

And Van Assche didn’t let the fall-winter mood dampen any of this zest for color, all the while working in his signature minimalist touches.

A shocking pink trench coat was kept tasteful thanks to the simplicity of its clean cut. It was paired with a crimson suit that gave the whole look a visual electricity.

A bright yellow oversize coat had a 19th-century weight to it that evoked a Parisian dandy.

To cap the collection, leather looks in black and dark blue provided a welcome contrast in color and sex appeal. A soft kinky hoody shimmered sensually.

The Milan-based fashion house Jil Sander, which was founded by a German designer, showed its menswear collection Friday in Paris.

It’s the kind of frontier-defying cross-pollination that’s healthy in European fashion to keep styles fresh and force designers to constantly challenge their own ideas.

Designer duo Lucie and Luke Meier demonstrated this in droves at their beautifully-executed minimalist show inside the grand Hotel Salomon de Rothschild.

The silhouettes were geometric, layered yet lightweight. Coats were tailored. Materials were light with a subtle sheen.

The color palette moved in a precise sequence from cream to gray, blue, burgundy and then black.

The program notes said the Meiers aimed for “parity between a tailoring which is sharp and precise and a softened modern wardrobe.”

A narrow trench coat in rose red cut a fine style by being ever so slightly asymmetric with a square panel on one side of the chest, a sharp triangle on the other.

Geometry continued via the straps of leather bags that crossed the body or in the paneled blocks of a knitted sweater.

It was intentional mismatching and deconstruction at the award-winning South Korean designer Juun J.’s fall display that riffed on the military.

Giant black-and-white checks on skirts cut on the bias and on double-breasted woolen coats were used as contrasts to silver bubble jackets or camouflage print styles.

Tartan and check insets were pieced together in visually arresting juxtapositions. This formula was employed alongside Juun J.’s signature oversize styles that were puffed up with voluminous layering.

The one major impracticality in these ready-to-wear looks were some headdress-helmets in silver, white, black and electric blue that came down to the eye and might have caused their wearers to walk into traffic.

The art of invitation

The art of the chic invite is still very much a staple of Paris fashion.

The little works of art often provide a hint as to what the collection has in store.

Louis Vuitton’s Virgil Abloh had guests second-guessing the meaning of a white bejeweled glove that arrived in the post. It was, of course, a reference to Michael Jackson, to whom he paid a fashion homage.

Berluti won the prize for the clunkiest invite: a hefty wooden block with the label’s details on top.

The Franco-Japanese house of Issey Miyake put on a collection in homage to the wind.

In the fall-winter silhouettes, it was not the wind of an angry storm at work, but more a gentle breeze that served to curve and soften the clothes’ shapes.

The result was a low-key affair by designer Yusuke Takahashi.

A welcome sharpness did appear in the collection via its print detailing, but its power was diluted by the rounded shapes.

For instance, some jagged yellow diagonal motifs evoked the strong movement of wind — but the looseness of the suits and coats on which they appeared lessened the effect.

The prints were conceived by an Asian wax resistant dyeing technique called batik that the house frequently uses.

Issey Miyake is one house that cannot be faulted for its use of cutting-edge fashion-making methods.

Elsewhere, another Asian technique, ikat — a sort of tie-dye — was employed to produce the collection’s strongest pieces.