The world cupped: The inside story of the bra | Inquirer Lifestyle ❮ ❯ 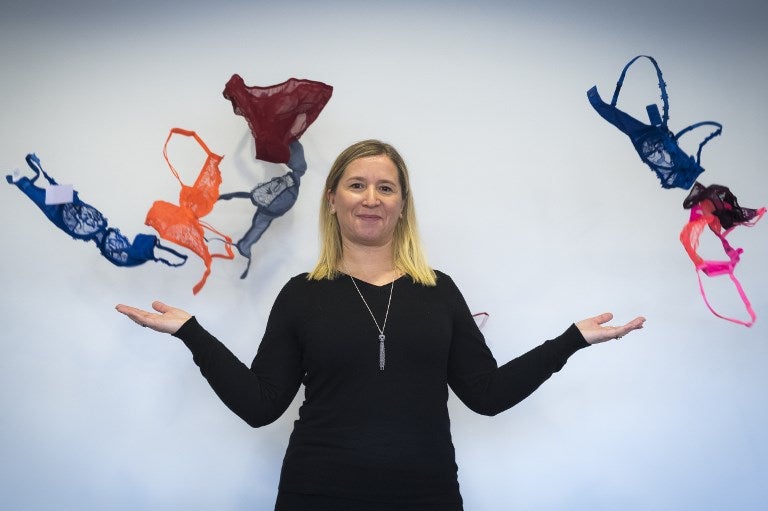 The world cupped: The inside story of the bra

PARIS, France – It rarely sees the light of day but the upscale bra is the most tested, sweated over and highly engineered piece of clothing of all.

AFP went behind the scenes at some of the most famous French lingerie houses to draw back the veil on the almost exclusively feminine world of bra making.

No other item of clothing provokes such fierce emotions.

Some swear by traditional bras, others prefer the structural minimalism of modern bralets and crop tops, while a growing feminist minority entirely reject what they see as a symbol of female oppression.

Designed these days using 3D modeling, bras made by most big French brands are sewn to the millimeter and samples are worn by testers before going on sale.

It takes up to two years from the first preparatory sketches for a new model to end up in the shops, according to their makers.

Prototypes are on average remade and altered around 40 times. The width of a pencil mark can often be the difference between two cup sizes, they say.

In the high-end family-owned Simone Perele lingerie house, new products are road tested by 80 of the bra makers themselves, said Stephanie Perele, the grand-daughter of the label’s founder.

They wear them for three days, washing them every night to see how the materials hold up before making up to 10 adjustments in the lead up to the final test.

These multiple dry runs on real women explain why there is no such thing in Paris as a male “corsetier” working on commercial women’s bras.

And it is also why even the most sensitive male fashion designers have their work cut out reimaging a piece of notoriously intricate apparel that has between 20 and 30 parts.

The managing director of Aubade, Martina Brown, said that for its latest collaboration it asked the Dutch haute couture house Viktor & Rolf to come up with 12 shades of its trademark fuchsia colour for a new range.

In the end Aubade went for their 13th suggestion, she told AFP.

“They had limitless ideas, some of which unfortunately weren’t doable. We had to drop the frills and the bows on the bonnet — but we did manage to get them into the embroidery. We also had to say no to their neoprene fabric, which was very cute but which scratches,” German-born Brown added.

“Comfort is what it is all about now,” said Alain de Rodellec, head of the French lingerie industry body, Promincor. It has organized a huge “Lingerie Rocks” show Sunday to mark the halfway point of Paris fashion fortnight.

“The bra is the first thing many women put on in the morning, and it is against the skin all day long,” he noted.

Seduction is not a priority for most women. “Push-up bras are losing ground in favor of a more natural hold,” Rodellec said.

More and more innovative bras are been made without underwiring, which can be a challenge for the “corsetieres” particularly when dealing with more ample bosoms.

However, only one in four women in France take a D cup or bigger, while more than half fit into a C.

A genius girl and girdles

The world-famous French lingerie industry was launched in the 1820s. The corset soon became commonly worn by pretty much all women, regardless of their class.

But by the end of the 19th century, as more women took up sport and other leisure activities, their needs changed.

Francois Auguste Gamichon made the first big technological breakthrough with an elastic meshed bra made with a mix of materials including vulcanized rubber.

He and his nephew Paul-Maurice Kretz, who brought into his firm, Chantelle, in 1898, won gold medals for their patents at the world fairs in Paris, Milan and London.

But it was a woman, Herminie Cadolle, who in 1889 came up with the key idea of supporting the chest from above with shoulder straps.

Her company, Cadolle, is still a leading brand.

By the start of the 1930s, when dresses became thinner and more body-hugging, bras began to reflect women’s natural proportions.

The golden age of French bra making followed World War II, with the dawn of Christian Dior’s “New Look” in 1947.

Competition was intense to invent models that neither compressed nor nipped the breasts but gave women a dramatic profile.

The real revolution came when the US chemical giant DuPont invented Lycra the same year. This elastic fiber could be stretched to seven times its size before regaining its original form, and gave unmatched comfort.

With the feminist revolution of the late 1960s some women burned their bras in protest at the all-powerful patriarchy at the Miss America beauty pageant.

A new “no bra” movement took up the torch last year in the wake of the #MeToo revelations, although the vast majority of women would still rather not live without what for them is a functional fashion item. /cbb