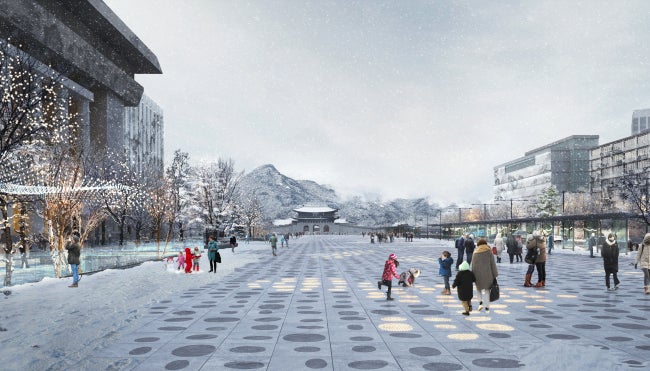 SEOUL — Seoul Metropolitan Government on Monday unveiled a construction plan for Gwanghwamun Square in central Seoul, which includes a plan to expand the square 3.7-fold, create an underground passage connecting major spots in central Seoul and make it a public transport hub.

Iconic statues of King Sejong the Great and Admiral Yi Sun-sin at Gwanghwamun Square will be relocated in order to secure an expansive view of Bugaksan and Gyeongbokgung, the palace connecting to the square, according to the restructuring plan titled “Deep Surface.”

The blueprint focuses on restoring historic meaning to the area by re-creating Yukjo street, the main street of old Seoul, and reducing the lanes of traffic running through from the current 10 to make it more pedestrian-friendly, according to the municipality.

According to the blueprint, the statues, which slightly limit the view of Gyeongbokgung and its mountain backdrop, will be moved in order to make more room for large-scale events.

The plan, however, is expected to face some opposition due to the historic significance of the statues. The statue of Admiral Yi Sun-sin, one of the most respected figures from the Joseon era, was built in 1968 and has become an icon of the square.

Seoul Mayor Park Won-soon assured that that the city government will collect opinions from citizens to reflect them in the final blueprint to be confirmed at the end of this year.

“We will make a final decision on the situation and sufficiently respect the opinions of citizens through a public discussion that will last until the end of this year,” Park told reporters at a news briefing.

Other plans to transform central Seoul include the creation of 4-kilometer underground walking path that would encompass the main areas of central Seoul — Gwanghwamun, City Hall, Euljiro and Dongdaemun.

As part of efforts to make Gwanghwamun area a public transport hub, the city government is also in consultation with the central government to push to host a high-speed rail line at Gwanghwamun Station, it said.

GTX-A, the first to start construction among three railways serving the greater Seoul area, is an 83.1-km section connecting areas from Unjeong of Paju in northwest Gyeonggi Province across Seoul to Dongtan in the southeast of Gyeonggi Province. The line will run at a maximum speed of 180 kilometers per hour.

The city government plans to begin construction work to transform the square and build the underground pedestrian pass early next year, with an aim to complete it by 2021.

During the two-year construction, Seoul Metropolitan Government said it would take measures to minimize traffic disturbance and inconvenience to people living and working in central Seoul.

The restructuring project will cost about 104 billion won, with 66.9 billion won to be funded by Seoul Metropolitan Government and 37.1 billion won by Cultural Heritage Administration.

Stretching from the gate of Gyeongbok Palace, the 557-meter-long Gwanghwamun Square in the middle of the 10-lane thoroughfare opened to the public in 2009. Critics, however, complain about the five lanes of traffic that run either side, comparing it to a gigantic traffic island in the middle of Seoul.