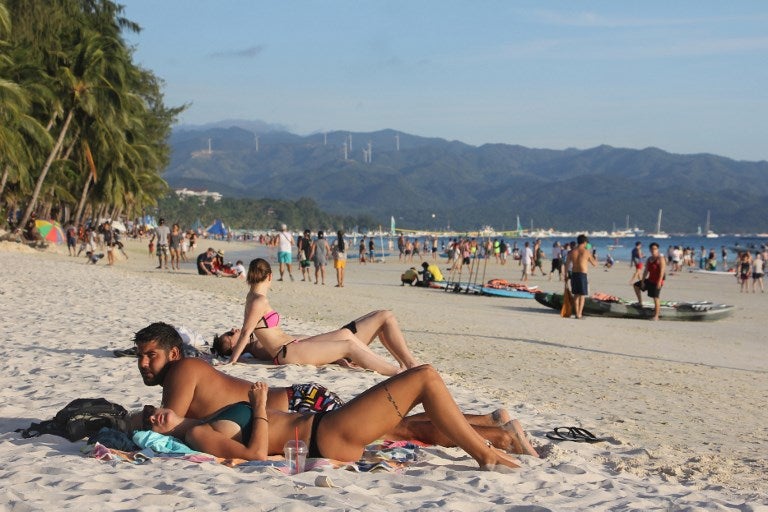 Tourists relax in a beach in Boracay, Malay town, in central Philippines on April 17, 2018, ahead of its closure. - The Philippines is set to deploy hundreds of riot police to top holiday island Boracay to keep travellers out and head off potential protests ahead of its six-month closure to tourists, the government said April 17. (Photo by STR / AFP)

MADRID, Spain – The number of international tourist arrivals rose by 6 percent last year to 1.4 billion, according to an estimate published Monday by the World Tourism Organization (WTO).

The increase was driven by travel to southern Europe, the Middle East and Africa, said the Madrid-based UN body, citing economic growth and cheaper air travel as key factors.

Although arrivals to the Americas grew by a modest three percent — four for North America — Europe, Africa and Asia-Pacific performed better, with rises of six, seven and six percent respectively.

In 2010, the WTO forecast that international tourist arrivals would only hit the 1.4 billion mark in 2020 — but it now said that stronger economic growth, more affordable air travel and an easier visa regime around the world had helped boost the market.

“The growth of tourism in recent years confirms that the sector is today one of the most powerful drivers of economic growth and development,” WTO secretary-general Zurab Pololikashvili said in a statement.

Total arrivals to Europe were 713 million but the WTO noted that arrivals in northern Europe were flat last year, citing uncertainty over Britain’s impending exit from the European Union.

Closer focus on data for Africa, which welcomed 67 million visitors in total, saw the north of the continent register 10 percent growth in arrivals staying at least overnight. Sub-Saharan arrivals were up six percent.

The Caribbean suffered a drop of 2.0 percent in arrivals as it continued to feel the effects of the September 2017 hurricanes Maria and Irma. The storms caused catastrophic damage in tourist hotspots such as Barbuda, Puerto Rico and the Virgin Islands.

The WTO predicted a global overall increase of between three and four percent for the current year, broadly in line with historical trends. Stable fuel prices would “translate into affordable air travel while air connectivity continues to improve in many destinations”, it predicted.

Outbound tourism from emerging markets, “especially India and Russia”, but also from smaller Asian and Arab markets is expected to continue to grow strongly, it added.

But at the same time the WTO warned that uncertainty related to Brexit “as well as geopolitical and trade tensions may prompt a ‘wait and see’ attitude among investors and travelers.” /cbb