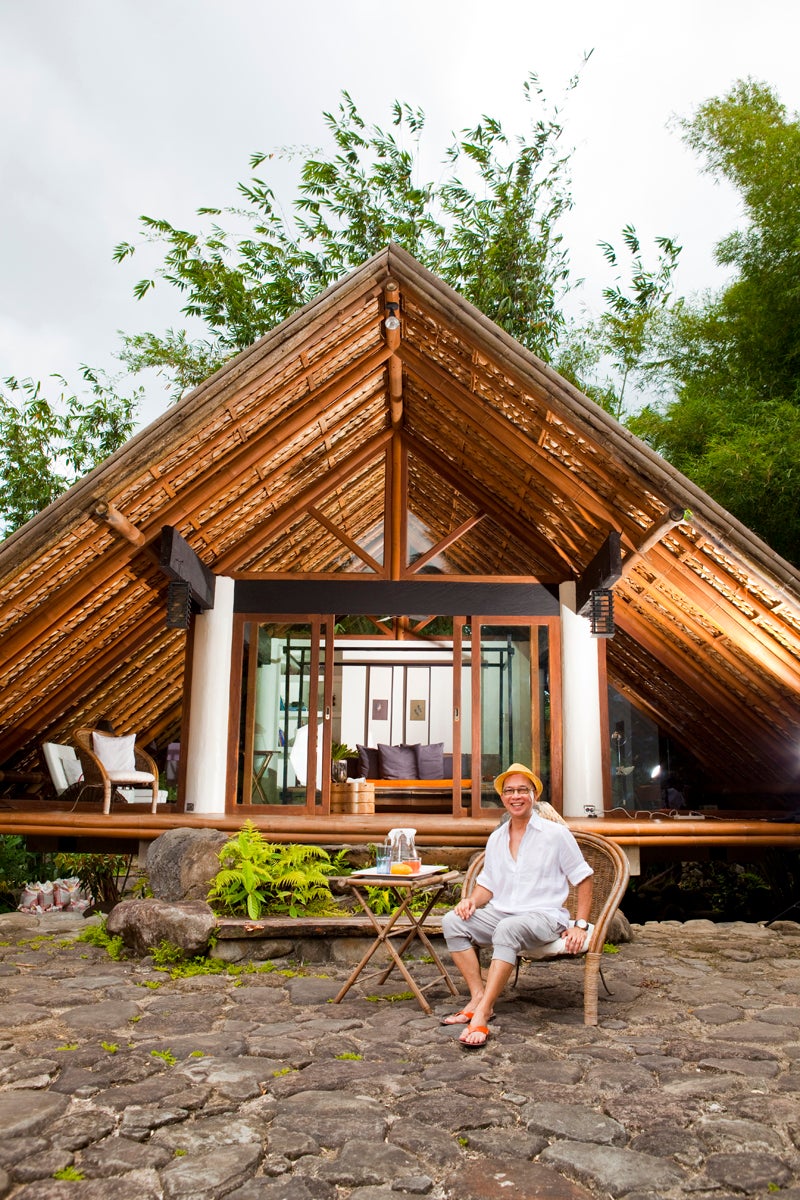 Bahay kubo Cesar Gaupo has reinvented the traditional nipa hut into an architectural marvel. By setting the house above a stone base, it seems to float over the landscape.

CESAR GAUPO: A river runs through his master design

The ride to Majayjay, Laguna, is a short three hours, and yet finding Cesar Gaupo’s weekend retreat here on the foothills of Mt. Banahaw is like looking for a needle in a haystack. After many wrong turns, you finally reach the dirt road that leads you to his resthouse.

“I had friends who got lost on the way,” says Gaupo. “They got here at 5 pm. And they were supposed to be here at lunch.”It’s not surprising why his friends and guests lose their way. The vista of coconut trees and of the mystical Mt. Banahaw is endless. You need a good eye and perhaps a GPS to find your way. But you forget that arduous search once you reach Gaupo’s place. The last thing you expect to see in the heart of the jungle is a massive wall of concrete, but there it is—it seems to have sprouted as if magically. Think of the wardrobe that led Lucy into Narnia. The experience is quite as amazing.

You push open antique wooden doors and find yourself facing a Balinese-style house but with cogon thatch roof like that of an ulog. The house is raised from the ground making it look like an open, airy structure. This sense of airiness, if not lightness, pervades the house itself .An open layout provides a clear space where friends can chat and even lie back on a lazy afternoon. 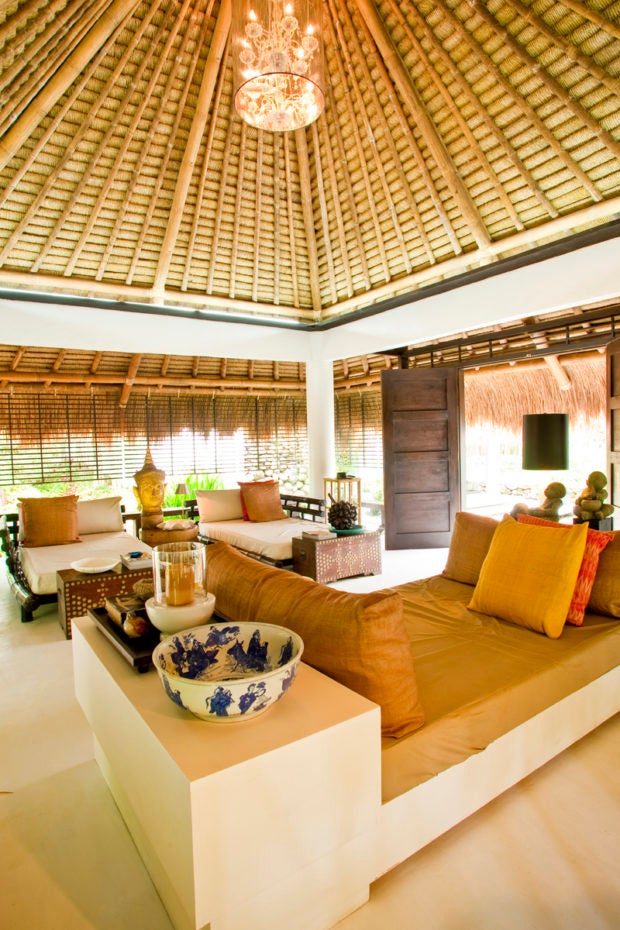 Divans are arranged to encourage chatter. If guests lack for topics, a variety of objects around could inspire casual banter: a Buddha head, a nipa seedpod, books, and magazines.This house has no walls; only glass corners delineate space. There is no barrier between indoors and outdoors—except for doors at opposite ends of the house. Stepping out of this house, you find yourself on a grassy courtyard. There are two houses on either side.

On your left is the guesthouse in an all-glass structure fitted out in Filipino modern style. On your right is more open space, similarly raised above the ground. At the end of the courtyard is a concrete wall with antique wooden doors.And then you hear it, the sound of rushing water. Stone steps on the other side of the door lead you down to a river, which Cesar says is always busy whatever time of the year. This river separates the property’s “public” areas from the master bedroom, which lies past an embankment. Another wall hides a full view of the house, which is the master bedroom.Then you begin to marvel at the mind that conceived this imaginative layout.

Cesar Gaupo is one of the country’s esteemed fashion designers. After carving a name for himself in the country, he was tapped by Shanghai Tang to design the global brand’s collections. The peripatetic life overseas eventually left him tired so a few years ago he decided to come home. As early as then, he wanted to create his weekend retreat, something that was off the beaten track. A visit to the home of close friend Larry Espinosa in Majayjay, Laguna, brought his attention to the potential of the area. After two months of regular visits to this faraway town in Laguna, he found a 1,700-sq m riverside property that suited his vision of a getaway. That was four years ago.

If you ask him how he designed the place, Gaupo would only smile and admit that he had no idea. He did several drawings of how he wanted things to look like and just immersed himself in the job. That was pretty much how he did it.The stone steps leading to the master bedroom were made by Igorot workers who were then at work in a nearby resort in Laguna. They worked on the riprapping of the banks between the two parts of the property. The water from the river that flows through the property was regulated by damming up its mouth.

Today, whatever time of year, be it summer or rainy season, a steady stream of water flows past. The river’s upper side has also been dammed for a pool where guests can swim. The water is fresh and cool, as it comes down from Mt. Banahaw. As construction work was under way, he was busy replanting the estate. To serve as cover, the riverbanks were planted to calateya.

Throughout the property, he planted trees mostly for cover: pole bamboo, Thai bamboo, and white bamboo. Everything else sprouted naturally over the past four years.Somehow, this lush wilderness blended well with the arranged landscape.The pavilion that is now the master bedroom was the first to be built on the property.

It is a free space with the furniture indicating the function of a given space. A stylized four-poster bed is the focal point of the room. Behind it is shelving that serves as divider between the toilet and bath behind. In front of the bed is the gear of an old-fashioned press that now doubles as coffee table. To the sides are low seats. To insulate the house from the outside, glass walls have been installed. Any day of the year, you wake up and see the outdoors. On a moonlit night, you can sleep with the beautiful view of the outdoors. Cesar says he intends to have the roofing of this house changed from the old anahaw thatching to cogon.

The fan-shaped pattern the anahaw leaves create on the ceiling will be missed. The cogon thatching used in the rest of the pavilions is more durable and gives the houses a more indigenous feel. The dining area pavilion is really the life of the place, where Cesar entertains guests. It is an open space, with only a wall hiding the kitchen, painted an immaculate white, and guest toilet and bath.“It really was the joy of doing it every day,” he says. “You just don’t know when the whole thing would be done.”