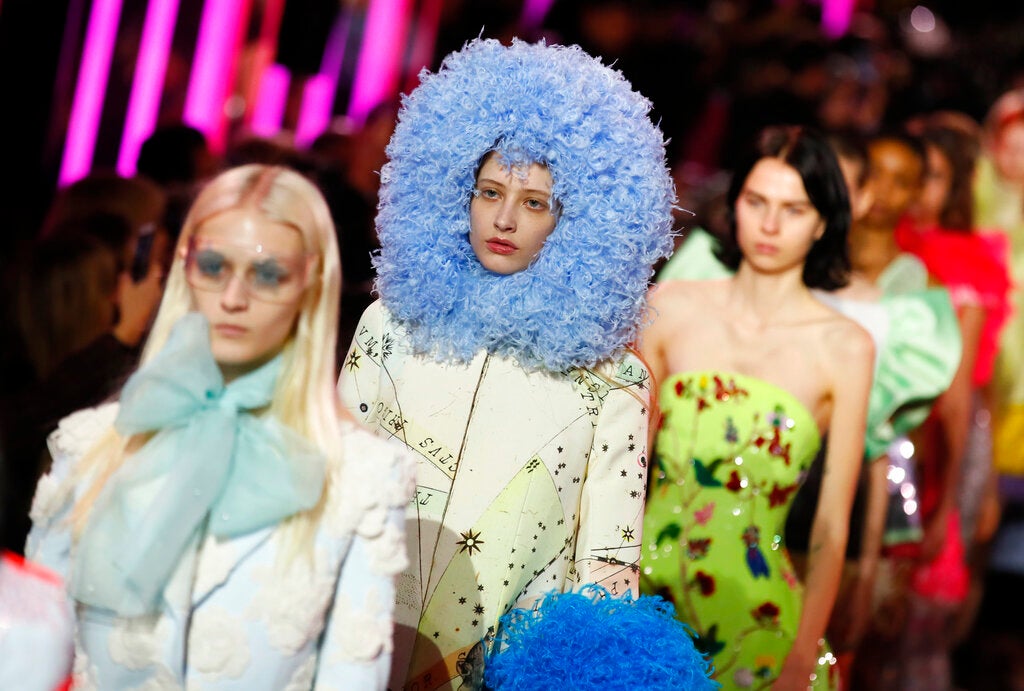 Inside a big top, Dior puts on circus-themed couture

PARIS — Dior drew inspiration from the top of the big top for a playful couture show held Monday in Paris, where models inside a circus-style tent walked through a human arch made of moving acrobats.

The theme seemed to well serve designer Maria Grazia Chiuri, who has struggled to fly in recent seasons.

The acrobatics also dovetailed with some of the recent film roles of Dior’s VIP guest, British actress Felicity Jones, who explained all to The Associated Press.

Here are some highlights of Monday’s spring-summer 2019 couture collections in Paris.

Hundreds of vintage light bulbs like the ones used at fairgrounds lit up Dior’s life-sized circus and a giant wooden pole held up the big top. Guests at the show inside the Rodin Museum gardens gawped at the decor.

Acrobats dressed in the black-and-white costumes of Pierrot, the clown character from French pantomime, entered the stage area on each other’s shoulders to begin the whimsical collection that riffed on the circus theme.

Dior has had a long history with the big top — from a famous 1955 photo shoot with elephants in Paris’ Winter Circus to the circus theme picked for one of former designer John Galliano’s most memorable shows.

And the circus seems to have provided Chiuri, who’s struggled to take off since taking Dior’s creative helm in 2016, the perfect muse to unlock her creativity.

It was light and fun, without being heavy-handed or overly literal.

A model in a chic sequined helmet wore a white origami skirt inspired by a clown’s ruff and featuring a slightly dropped waist.

A clown’s multi-colored costume spawned a fantastic knitted tulle playsuit with a stylish Juliette sleeve — a shape repeated throughout the 68-look collection.

It was worn atop a “tattooed” body suit that conjured up images of Victorian-era circus performers, one of many details that gave this collection a historic depth.

Felicity Jones spoke to the AP from under Dior’s big top and said she coincidentally she had just finished playing an acrobat for a movie called “The Aeronauts” that reunited with “The Theory of Everything” co-star Eddie Redmayne.

“This set is so fitting. It’s obviously in the air,” she said, smiling.

The feminist edge Chiuri has brought to Dior since becoming the first female designer in house history also mirrored the “kick-ass women” Jones chooses to play, including U.S. Supreme Court Justice Ruth Bader Ginsberg in the biopic “On the Basis of Sex.”

“She’s a formidable woman. She’s someone who’s changed the face of gender equality in the world, so it was an enormous privilege to be playing her,” Jones added.

The arty setting was an appropriate backdrop for the sculptural creations that seemed to borrow from works housed at the Louvre, located hundreds of meters (yards) away.

An organic cobalt blue gown featured bare shoulders and a pair of pleated wings that created a highly dramatic dynamic, similar to the Louvre’s famed Hellenistic sculpture, The Winged Victory of Samothrace.

Elsewhere, the marbled form of insects — or perhaps the intricate molecular structures of stones and crystals? — were reflected in a beautiful series of draped and loosely fitted silk gowns.

Van Herpen is a couture poet.

The embellishments and shimmering embroideries on diverse designs were more than a match for the gilded gold of the show venue, Paris’ ornate Garnier Opera House.

A 1950s bar jacket and peplum ensemble and contemporary pants sported floral scenes that made it appear the pieces were used as a painter’s canvas.

And colored feathers that embellished several dresses gave the collection a dreamy quality as they slowly floated by, with the occasional plume falling gently to the ground.

Lanvin, the world’s oldest continually running couture house, has suffered creative turbulence and questions about its direction ever since the departure of lauded couturier Alber Elbaz in 2015.

Since then, there has been a steady stream of disappointing designers whose collections have prompted lukewarm reviews.

“After a thorough and extensive application process involving an incredible array of talented designers,” Sialelli’s profile was that which embodied best “this new chapter in the house’s history,” Lanvin said.

Sialelli was poached from his position as the men’s design director for Loewe.

He said he aims to bring “emotions through compelling stories” and to define “a modern attitude” while continuing Lanvin’s iconic legacy.

The French hold a precious place in their hearts and culture for Lanvin, founded in 1889 by female fashion trailblazer Jeanne Lanvin.

A thousand-watt showbiz lights at the foot of the runway spelled out the surnames of creative partners Tamara Ralph and Michael Russo, as couture looks spilled out in va-va-voom haute glamour.

Daywear was reasonably restrained, featuring details such as a snake embellishment across a tight double-breasted jacket in malachite or a circular hat with an oversize rim.

But for the evening, the house put away its subtlety and got out its tulles, feathers and skin-baring bodices in black, white and neon pink. They will soon likely crop up on a red carpet in the French Riviera.

Despite being relative fashion newcomers — they have already had star clients like Beyonce, Angelina Jolie, Kristen Stewart and Jennifer Lopez. MKH

Dior pulls the stars in conveyor-belt menswear show in Paris