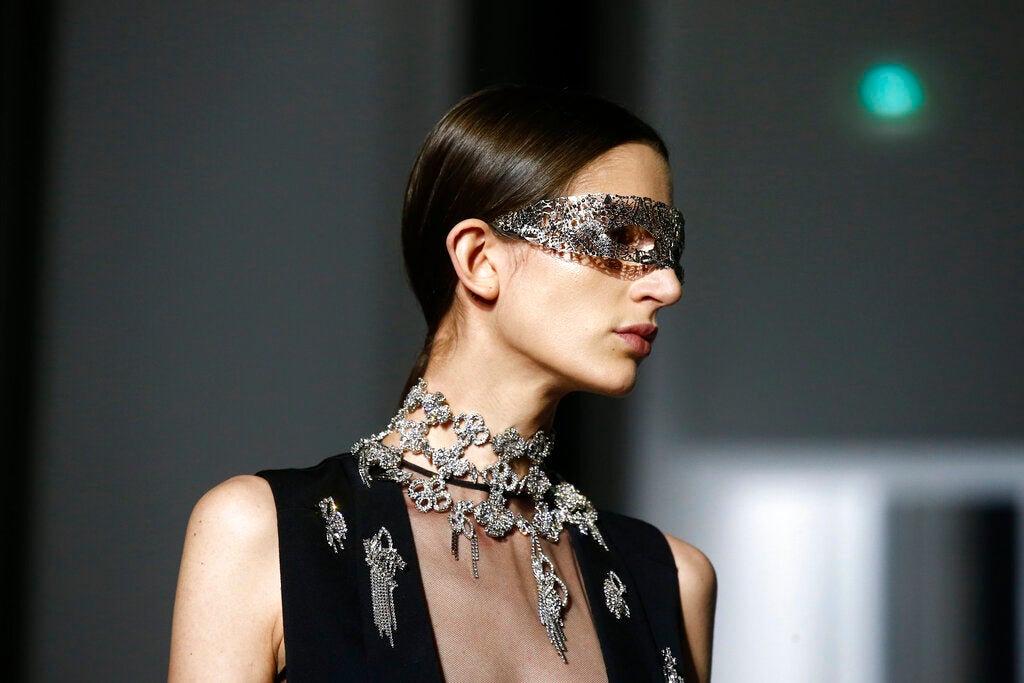 Givenchy flies high as Lagerfeld is absent at Chanel couture

PARIS  — It’s snowing in Paris, but not at Chanel, which showcased 18th-century-inspired couture that frothed inside a sunlit Italian villa.

For once, Karl Lagerfeld didn’t take his usual bow — the house said because the octogenarian designer was fatigued.
Some highlights of the spring-summer 2019 couture collections on Tuesday, including how Clare Waight Keller proved she’s a rare creative force with a sublime display at Givenchy:

Could it be the best couture show of the season so far?

British designer Waight Keller, who had until 2017 never touched couture, produced a jaw-dropping collection on Tuesday evening that demonstrated a surprising mastery.

To moving operatic arias, diverse designs dipped into fresh creative explorations — all from the base-note of black.
Black latex leggings shimmered like an oil-slick to begin the collection and introduce a textural contrast against an elderberry-colored architectural bar jacket with one single white lapel. It looked like a bolt of lightning.

If a bolt of lightning was meant as a visual metaphor for the 42-piece collection, it was fitting.

Waight Keller’s couture danced from the delicate white feathers on a pearly strong-shouldered bustier to the humor of a black couture rucksack with batwing ruffles.

The artistry of a multicolor-fringe clown-like creation with a Maleficent ruff led on to the imagination of a black embellished “jelly fish” dress with cinched waist and pink tulle skirt that spilled ribbons like tentacles.

Some editors have pointed out that the woman who worked for Chloe from 2011-2017 to make salable but ultimately forgettable designs seems to be a completely different person to the one we see today at Givenchy.

It’s the beginning of something special in Paris fashion.

Chanel’s designer Lagerfeld, who has looked increasingly frail in recent seasons, did not come out to take a bow at the house’s couture collections in Paris because he was “tired.”

In his place, his longtime studio director Virginie Viard appeared through a door in the lavish Italian villa decor that had been painstakingly created by the house.

It immediately prompted surprise and visible sadness from many fashion editors attending the show at the Grand Palais.

At the end of the first show at 10 a.m., an announcement explained the designer would appear for the noon presentation. But come noon, the German-born couturier was absent again.

It’s the first time in recent memory that Lagerfeld, who has designed for the Parisian stalwart since 1983 and was a contemporary of the late Yves Saint Laurent, has not been physically present to receive applause at the end of a show.

In a statement, Chanel said “for the traditional greeting at the end of the show, Mr. Lagerfeld, artistic director of Chanel, who was feeling tired” asked Viard “to represent him” — without providing any further details.

A gentle geometry defined Chanel’s summer silhouette on Tuesday — one that riffed on the decor’s impressive architecture. The set this season featured a shimmering Italian Chanel villa center-stage, with steps that led the gaze down to myriad real palm trees, grass and a rectangular pool.

Shivering and dripping guests were momentarily transported away from Paris’ subzero temperatures and snow to enjoy a moment of summer bliss, and the clothes’ pastel hues glistened in floodlights evoking warm sunshine.

Slits in the skirt and long vertical lines in the center of the body were a central theme in this season’s feminine 62-look collection.

A silvery skirt-suit, a house signature, opened the show with a slit running down the leg to the season’s new shoe: a backless pointed heel with a full-fronted panel.

The slit also morphed into an exploration of unfurling styles in some jackets that seemed to open up like the scented flowers in the villa’s verdant gardens.

But there a pernicious feeling that this show lacked some artistic direction.

“I did think of Marie Antoinette when I saw the pink dresses at the end. They were beautiful,” she told AP.

“(It evoked) a bygone era to see the dresses with the feathers up close,” she added.

Coppola, who won the best director award at the Cannes Film Festival in 2017, has come a long way since she first forged ties with the Parisian house as a nervous teenage intern.

“I was really intimidated … It was thrilling to be 15 in Paris in the ’80s at Chanel,” she said. “It was during the couture, so it was incredible seeing it being made.”

There is something timeless about Giorgio Armani’s couture.

The timelessness is not just apparent in the eternal elegance of his styles, which on Tuesday showed off the fashion icon’s famed cutting skills through tailored jackets. (Armani cut his teeth in menswear tailoring).

But it’s also apparent in the way the couturier evokes an imagined reality. The Armani Prive collections thus throw to the wind any real interest in evoking a spring-summer season, for instance, or a trend or any up-to-the-minute fad.

At the second of Tuesday’s double-shows, alongside Chanel, Armani Prive showcased a series of archetypically couture looks in the exclusive Hotel d’Evreux in the Place Vendome that made statements of their own with shimmer and bold color.

Billowing silken Asian-style pants shimmered below tops that contrasted in their color or texture — in checks, sequins or paillettes.

The designs could have featured in any of the designers shows of the last few years without looking out of place.
But as Yves Saint Laurent once said, “fashions come and go, style is eternal.”

It began as a front detail on a truncated, shoulder-less little black dress.

Then, the mischievous item cropped up as a cinched belt on a coral red gown or a long pink satin one with divergent stripes.

Going retro, the bow was conjured up as a ’70s jabot collar on a Farrah Fawcett-like blue silk column dress.
But the piece de resistance was the detail’s cameo as an oversized bust detailing, giving the feeling that the model in a red tulle gown could be unwrapped.

Other great ideas in the 45-piece display included a look that used swathes of bright yellow ruffled silk to cocoon its wearer.

It was, however, the versatile bow that stole the show. /ee