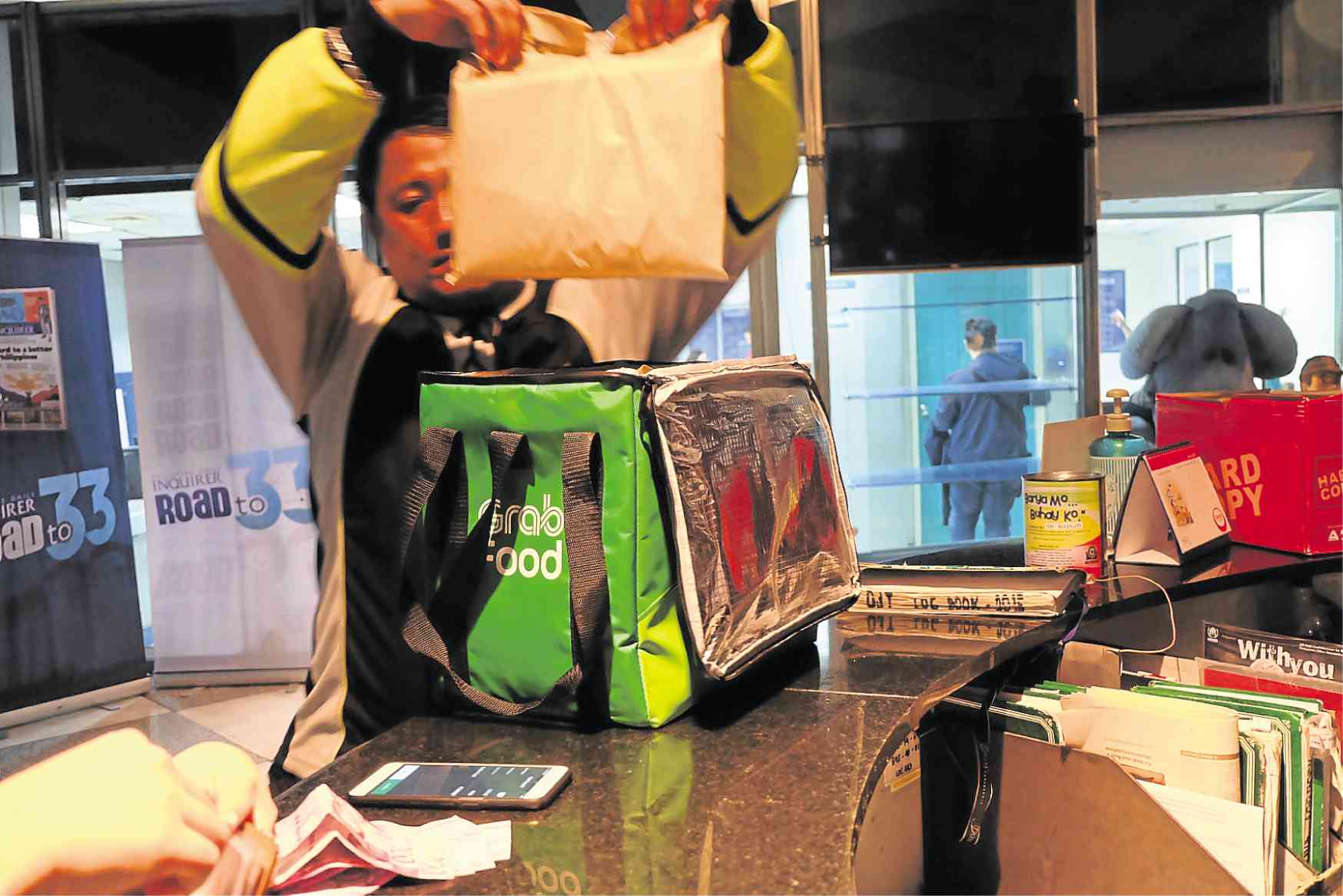 Those who don’t cook and who used to rely heavily on fast food hotlines now have a whole gamut of options. That hip joint in Poblacion? The childhood favorite you haven’t gone back to in years? That resto you’ve been meaning to go to, if only traffic weren’t a thing? They all deliver now, a few clicks and taps away, thanks to third-party companies.

Sure, the service isn’t flawless. There was the time our order arrived sans one lengua taco. Or the time one milk tea spilled completely before reaching our doorstep, leaving only a sad pile of pearls at the bottom of the cup. Or the time the delivery guy went to the wrong address and decided, screw it, I’m just not going to deliver this dim sum.

But, still, we’re hooked. We use these delivery services multiple times a week, alternating between Foodpanda and Grab Food. One night, we had a food coma-induced idea. What if we challenged these companies to a race? (Without them knowing, of course.)

Our rules were simple: We would order from the same restaurant in the same location, using both services at the exact same time. Then we would wait and see who would arrive first.
Who would win?

Our restaurant of choice for the first round was Bad Bird at Hole in the Wall in Century City Mall, Makati. The food would be delivered to an office address in Makati.

To level the playing field, we made sure the orders would be identical.

We clicked on Bad Bird’s menu items on Foodpanda, choosing the spice level of the chicken (Safe, Spicy, Chemical). Grab Food did not have that option. That may cause a delay, we thought. We hadn’t even ordered yet and the race was already becoming interesting.

Foodpanda said it could deliver our order in 35 to 45 minutes. Grab Food said 57.

We placed our orders at exactly 6:20 p.m. Foodpanda charged us a P29 delivery fee, while Grab charged P49.

His last name was Manalo. “This guy is going to win,” we joked.

At 6:33, Foodpanda told us, “The restaurant is preparing your food.”

At 6:40, Manalo arrived at the restaurant. At 6:42 he sent us this message: “Ma’m ano daw po ung chicken nyo spicy or not spicy or super spicy.” Oh, Mr. Manalo, you’re not going to win.

“Your order has been picked up for delivery,” Foodpanda said at 6:49. Robert, the Foodpanda delivery guy, arrived with our Bad Bird order at 7:05 p.m, 45 minutes after we ordered.

Mr. Manalo arrived just five minutes after him, at 7:10 p.m. Not bad considering how he seemed to be lagging behind initially.

Then we realized how he was able to catch up: Robert was riding a bicycle while Manalo was riding a motorcycle.

This time, the finish line would be a home address in New Manila, Quezon City.

We were ordering from French Baker in Robinsons Magnolia, but there was a weird thing: Its menu on Foodpanda was very limited—just sandwiches, main courses and juices.

We ordered a clubhouse sandwich and a lot of garlic toast at 7:53 p.m. This time, both Grab and Foodpanda charged us P49 for delivery.

The Foodpanda timer read “39 minutes,” to indicate our order had been received.

At 7:58, Larry (also known as Not Manalo) arrived at the restaurant.

At 8:04 p.m., 11 minutes after we placed our order, the Foodpanda timer disappeared and was replaced by a crying emoji. “French Baker-Robinsons Magnolia is very busy. It seems you were not the only hungry person right now! We had to cancel your order— you’ll be fully refunded if you were charged. Would you like to order from somewhere else?”

No, no, no, Foodpanda. By canceling our order, you forfeited. You just lost Round 2.

It’s the final round and the finish line is the same as Round 2—a house in Quezon City. The restaurant, Dulcinea on Tomas Morato. The order, classic churros con chocolate.

As we were placing our order, we heard our inbox chime. Foodpanda’s Customer Happiness Team sent us an e-mail with the subject: “Sorry we left you hungry! Here’s P60.”

It read: “Apologies taste better with P60. Your food from French Baker-Robinsons Magnolia on 01/13/2019 didn’t arrive at all and we’re very sorry. Please give us a chance to try again. The voucher is already in your account, just select it at checkout.”

The Foodpanda delivery fee was P35 this time, while Grab Food’s was a steady P49.

In this round, the race was never close at all. Grab Food took an early lead and kept it, telling us our order would arrive in 24 to 28 minutes. At 7:06, Rolando the Grab driver arrived at Dulcinea. Our order was also placed at 7:06.

Unless the Foodpanda guy pulled off a miracle, it looked like victory was Grab Food’s, we thought.

At 7:16, Grab Food notified us that the driver had collected our churros and was on his way to our address. At 7:20, Foodpanda’s notification told us that our food was being prepared.

Grab Food may have won the race, but we’re still going to keep using both services. There are plenty of things to like about each company.

We like that Foodpanda works both on our phones and our laptops and desktops, and we like that it lets us pay using our debit card. We like the delivery fee discounts, too.

We like that Foodpanda also operates in Davao and Cebu. Grab Food is available in certain parts of Metro Manila and Cebu.

We like that Grab Food lets us stay in touch with the driver the entire time, so we know exactly what’s going on with our order. That means flexibility, too—it’s easier to request changes and order things that aren’t on the app’s menu.

We like that there’s no minimum delivery requirement with Grab. We enjoy the special promos and vouchers both companies surprise us with.

Ultimately, we’re glad they exist because they offer such convenience. In that sense, we’re actually the winners. –WITH A REPORT FROM NIKKA VALENZUELA