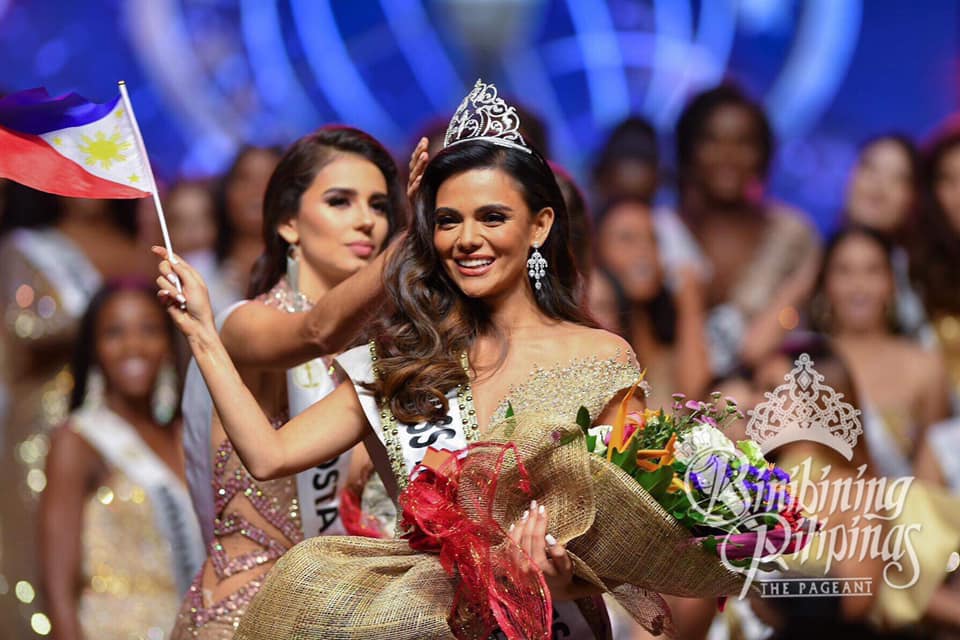 MANILA, Philippines — A Bohol-born analyst made history when she became the first Filipino woman to win the Miss Intercontinental crown after 46 long years, besting 82 other aspirants in ceremonies at SM Mall of Asia Arena in Pasay City on Saturday night.

Karen Gallman was proclaimed “the most beautiful in all continents” during the program that ended past midnight on Sunday.

First for the Philippines

“This (crown) means a lot to me. This is the first time the Philippines won Miss Intercontinental, so I’m very happy I could do this for the country. I’m so grateful!” she told members of the local media after her coronation.

This is also the first time for the Miss Intercontinental pageant to be held in the Philippines.

Gallman said she was thrilled to have spotted Binibining Pilipinas Charities Inc. chair Stella Marquez Araneta in the arena.

“I didn’t know they will come tonight. And they were cheering me on, clapping. She was teary-eyed when I won,” Gallman said.

Araneta also came up on stage to greet her new queen.

“She (Araneta) told me she knew I would win,” Gallman said.

During the final competition, the Filipino contender earned one of the six spots for delegates from Asia and Oceania for the Top 20, who then all competed in swimsuit and evening gown.

The final six delegates were composed of the top performers from each of the five continents, and the “Peoples’ Choice” who garnered the most online votes.

Gallman was proclaimed queen of Asia and Oceania and moved to the final round of competition, together with Ethiopia’s Bella Lire Lapso for Africa, Slovak Republic’s Laura Longaurova for Europe, Costa Rica’s Adriana Moya for North America, and Colombia’s Hillary Hollman for South America.

During the final round of competition, the final six contestants were asked to define success.

Gallman replied: “Success is not just about wining in life but setting goals, smaller goals, and achieving your dreams, and working hard for everything you want, and always looking up to God and being thankful for everything. For me, that is success.”

She spent her childhood at Barangay Bood before migrating to Australia at age 8.

“So, I was basically born and raised in Bohol jud,” Gallman, who was crowned Miss Ubay 2007, told the Inquirer during her homecoming last year.

Gallman said she had happy childhood memories at Barangay Bood where she grew up with her seven siblings.

Her most memorable experience in Ubay was when she fell from a “mansanitas” (Ziziphus jujube) tree.

“I had the best childhood memories. And I have Bohol to thank for that—the surroundings, the environment and the people,” she said.

She said her mother, Editha, trained them to speak the Visayan language and embrace the Boholano ways even if they were living in Brisbane, Australia.

Gallman speaks Cebuano fluently without a foreign accent and even proudly calls herself “Bisdak” (“Bisayang daku,” or true Visayan), which makes her all the more endearing to many Boholanos.

In earlier reports, her mother described her as “independent, buotan nga anak (a good daughter)” whose big dream was to become a beauty queen.

Gallman said she would like to take a short break before she fulfilled her duties as the ambassador of the Miss Intercontinental Organization, which promotes the “power of beauty.”

Bohol Rep. Erico Aristotle Aumentado and a relative of Gallman, ecstatic over her victory, said in a statement: “My family, the entire Ubay community and the Boholanos are very proud of what our very own Karen Gallman has achieved. The first Filipina and the first Boholana to win, ever, the Miss Intercontinental pageant.”

Even Bishop Abet Uy of the Diocese of Tagbilaran shared the news on Gallman’s winning on Facebook, using the hashtag #proudlyboholano. /pdi