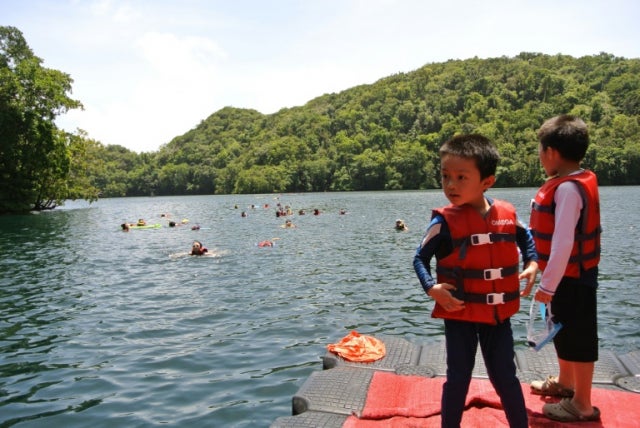 Swimming with the jellyfish on Mecherchar island, about a 45-minute boat ride from Koror, is 'one of the most unique attractions' Palau has to offer, according to the Visitors Authority. Image: SEBASTIEN BLANC - AFP/File

Swimming with the famous golden jellyfish in Palau can be put back on the bucket list following a two-year ban, but bathers may be stung with a hefty price increase for the pleasure.

The government ordered the famed Ongeim’l Tketau Jellyfish Lake closed to swimmers in 2016 because of dwindling numbers of the unique creature, blamed on warming waters although with some suspicion sunscreen on bathers may also have contributed.

The conservation move proved costly for tour operators with the loss of Palau’s most popular attraction contributing to a slump in tourism numbers.

But authorities in Koror State, which owns the resource, say stocks are now recovering and tourists are again being welcomed at Jellyfish Lake.

Swimming with the jellyfish on Mecherchar island, about a 45-minute boat ride from Koror, is “one of the most unique attractions” Palau has to offer, according to the Visitors Authority chairman Ngirai Tmetuchl.

It is estimated to attract at least two-thirds of the annual visitors to the western Pacific archipelago which peaked at 160,000 in 2015.

The numbers slumped to 108,000 last year which Tmeuchl said was caused by a combination of factors, including restrictions on Jellyfish Lake.

The rare species of golden jellyfish, believed to exist only in this marine lake, does have a sting but it is mild and often undetectable making swimming among them a popular experience.

The jellyfish population, which once swelled to around 20 million, slumped in 2016 because of El Niño, a climate pattern linked to warming waters in the central and eastern areas of the equatorial Pacific.

Palau President Tommy Remenegsau called for the lake to be closed, and while it was never officially shut down by Koror State, the dwindling jellyfish numbers saw a self-imposed ban by tour operators who stopped taking visitors to the island rather than charge them US$100 to see nothing.

With the waters cooling over the past year the jellyfish have increased to numbers strong enough to invite tourists back but Sharon Patris, a research biologist at the Coral Reef Research Foundation said it would take some time to reach “normal numbers” of five to eight million.

A proposal to increase the visiting fee to US$150 is now before the Koror State legislature.

Authorities are also strictly enforcing rules about the use of sunscreen, saying it must be environmentally friendly and applied more than 30 minutes before entering the water.

Although a link between sunscreen and falling jellyfish numbers has been suggested and dismissed, authorities said they wanted to ensure the purity of the water.

Clothes worn by bathers must be thoroughly rinsed before swimming to eliminate the risk of taking “invasive species” into the lake.

Patris added there was a similar fall in jellyfish numbers in 1998 linked to an El Niño event and data showed “the jellyfish did not disappear because of the presence of sunscreen”.

There are more than 50 marine lakes in Palau, five of them containing jellyfish but only the one Jellyfish Lake is open to visitors.

The Visitor Authority’s Tmetuchl has called for a second lake containing the same golden species of jellyfish to be made available to the public.

This is opposed by conservationists who say it would expose another lake to the same risks as the first. NVG