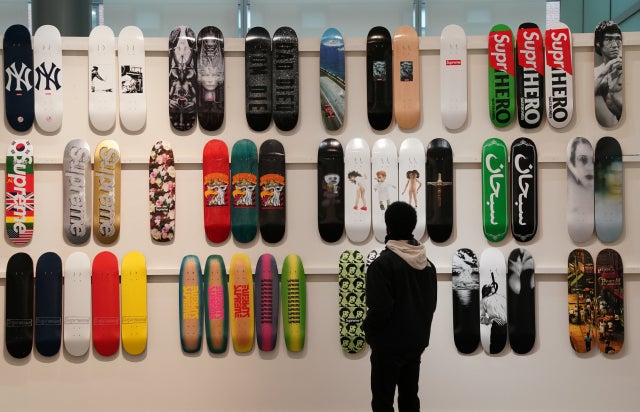 People admire the Sotheby's New York display of the only privately owned collection of every Supreme skate deck ever manufactured for the online-only sale “20 Years of Supreme” in New York on January 18, 2019. Image: Timothy A. Clary / AFP

A collection of all 248 skateboards produced by streetwear brand Supreme has been sold for a record $800,000 at a Sotheby’s online auction.

Supreme, founded by British designer James Jebbia and established in 1994 in New York’s Soho neighborhood, gained a special status among skateboarding connoisseurs with its streetwear-inspired clothing.

The collection, sold in a two-week online auction that ended Friday, included Louis Vuitton-monogrammed decks, a series of Last Supper decks and a tribute to Nike Air Jordan sneakers.

Also in the collection was a custom-made Louis Vuitton trunk worth several thousand dollars.

The entire Supreme production was brought together by Los Angeles collector Ryan Fuller, who began his yearslong quest in 2005.

“I tried to hold off on buying decks for as long as possible because I knew once I started I’d have to have them all,” Fuller said in a video released by Sotheby’s.

While the collection was sold on the lower end of its estimated value — up to $1.2 million, according to Sotheby’s — it is by far a record for skateboard sales.

In 2012, a board owned by skater Jamie Thomas was purchased for $38,425 at a charity auction organized by the Tony Hawk Foundation.

And in June 2018, at a sale organized in Hong Kong by Sotheby’s, a series of eight custom boards designed by American artist Kaws was auctioned for $55,700.

“It’s considered art. People like living with these boards,” he told AFP. NVG