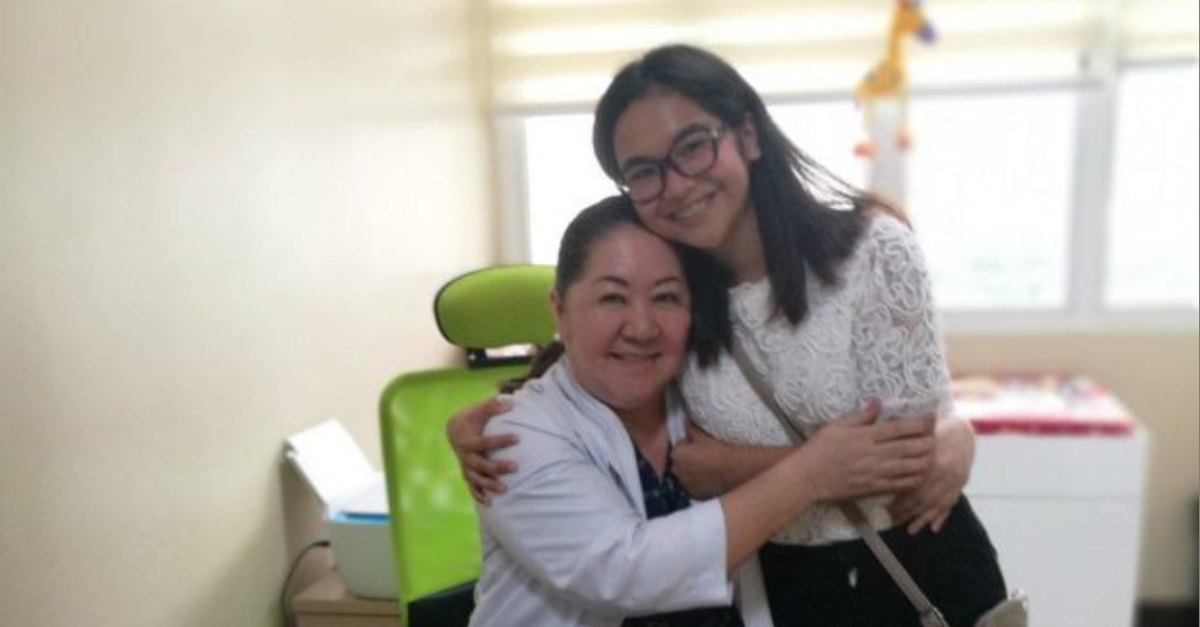 Through accidental meetings, we sometimes get to know certain people who can bring great significance to our lives. It could be a person we bump into a bookstore, at a train station, or at a hospital while we are in a hurry not to miss a scheduled consultation. Perhaps we may or may never see them again.

Arabella Garciano, a 17-year-old young woman from Bohol, was lucky to finally meet an important person who did her good, even when she was then too young to remember.

The teen inspired netizens recently when she posted a photo of her beside a pediatric surgeon who apparently operated on a sickly, newborn baby for free, seventeen years ago. The baby turned out to be her.

“17 years ago, a sickly baby needed an operation because she [had] a cyst on her chest. The mother only [had] ₱40 [in] her wallet. But this doctor operated the child. For free.” Garciano said.

17 years ago, a sickly baby needed an operation because she has a cyst on her chest. The mother only has ₱40 on her wallet. But this doctor operated the child. For free.

And that is why I need to become a doctor. I need to share the same kindness I was lucky enough to receive. pic.twitter.com/DBea1TXdNZ

Garciano, the newborn infant, had a cyst on her chest way back when she was only one year old. Her mom, Myleen Garciano, had only forty pesos left in her wallet at that time, definitely not enough to afford an operation. Luckily, a kind doctor in Cebu Velez General Hospital helped the troubled mother and operated on baby Arabella for free.

The photo which was shared on Twitter last Jan. 23, has gone viral with over 35,000 likes and almost 8,000 retweets as of writing.

In the thread, Garciano named the doctor as Dr. Maribel Du, a pediatric surgeon from University of Cebu Medical Center.

By the way, this is Dr. Maribel Du. Pediatric surgeon. The person who I owe my whole life.

This remarkable act of generosity and compassion shown to her family by a stranger has influenced her desire to be a doctor someday. “I need to share the same kindness and compassion I was lucky enough to receive,” Garciano stated in her post.

In an interview with INQUIRER.net, Garciano said that as she was growing up, her parents told her about what happened to her as a baby.

She had an inborn cyst. Her mom noticed that there was a hole in her chest when she was born, but her mom did not bother about it at first, because her baby seemed normal. Being also financially challenged, she cannot afford to bring her baby to a clinic, even for check ups during that time.

“It did not bother her until I reached one [year old]. The hole was starting to swell and it was secreting fluids from time to time. Bathing me was really challenging because soaps, shampoos, and baby powders would inflame the hole, causing it to secrete more green fluids,” Garciano said.

“I actually asked my mother about the forty pesos thing,” Garciano said, referring to the only amount her mom apparently had when she was taken to the hospital. Her mom confirmed to her that it is all true, further telling her that her mom met the kind-hearted doctor through a neighbor who had a nurse girlfriend. “Ate Yham, the nurse, introduced her to Dr. Du.”

When they went back to their hometown in Cebu City to celebrate Sinulog, she told her mom that she wants to meet Dr. Du. “It was actually really really hard to find her,” she said. “Then suddenly, a friend of my mom hit us up [and said] Dr. Du is in Cebu. I couldn’t wait to finally meet her.”

On Wednesday, Jan. 23, they went to Dr. Du’s clinic in Cebu because her seven-month-old brother has an “inguinal hernia,” and he needs to be operated on, as soon as possible. With the same trust to the doctor who saved her baby Arabella then, Arabella’s mom asked Dr. Du to do the operation to her child again. The baby will go under the knife next month.

Arabella is currently a Grade 11 STEM student in Tagbilaran City Science High School in Bohol. She is also a consistent honor student, a debater and a campus journalist. Last year, she won as best speaker in an inter-school competition hosted by the University of the Philippines organization Kadugong Bol-anon. Meanwhile, their family now owns and runs a business. As to the current condition of her health she said, “Perfectly normal. No complications or anything.”

She also shared a photo of the scar left on her chest, and said people sometimes mistake it for a hickey, something she and her family simply laugh about. One might as well bear a strange-looking scar, anyway, in exchange for another chance at life.

“No words can ever tell her how grateful I am for her kindness and compassion,” Garciano fondly speaks of the doctor who saved her life. At the same time, she honors her parents who gave her life. “I am very happy that my family is now financially blessed after years of being stuck in poverty. To be honest, I wouldn’t be here too if it wasn’t for my very hardworking parents.” JB