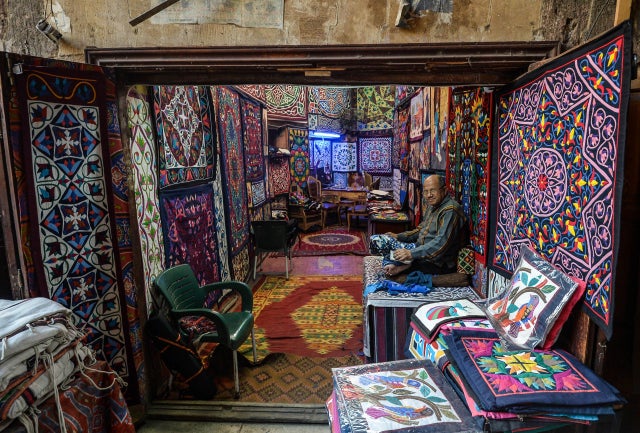 An Egyptian craftsman sits working on a tapestry in his shop in Khayamiya Street, or the Street of Tent-makers, in the old city of the Egyptian capital Cairo on December 18, 2018. Image: MOHAMED EL-SHAHED / AFP

A stitch in time to save Egypt’s ancient tentmaking craft

Mohsen al-Khayami has for years watched sadly as his once lucrative craft business dwindled and fellow artisans deserted the ancient art known as Khayamiya, or tentmaking, for better-paying jobs.

The 68-year-old, a master of one of Egypt’s most traditional crafts, has been hand-stitching the decorative appliques that nowadays can range from wall hangings to bed quilts for more than half a century, so long that his customers have named him after his art.

“I learned it when I was eight,” he told AFP. “It took me years before I could master it and be able to finish a whole tapestry on my own.”

In days gone by, his craft was used to make tents and large tapestries but has evolved as demand has changed.

These days, Khayamiya refers to the creation of ornamental items mostly in cotton that can also include pillowcases and throws, although the traditional name — tentmaking when translated into English — endures.

Khayami’s shop is among two dozen others lining the covered Khayamia Street or the Street of Tentmakers, opposite the towering 11th century Bab Zuweila, one of Old Cairo’s main surviving gates.

The street has lured tourists for years and the craftsmen’s shops were among the main draws for foreign visitors until the 2011 uprising that toppled longtime ruler Hosni Mubarak.

The ensuing turmoil scared away tourists, and since then business has slowed to a trickle.

On other appliques, Khayami has sketched folk tales of Old Juha, a humorous character in Arab culture, always depicted with his faithful donkey. Tales of their exploits often impart valuable lessons.

The centuries-old art of Khayamiya goes back to the time of traveling caravans, when huge tent pavilions were used as shields from the desert’s searing sun.

It is believed to have emerged during the Fatimid dynasty, which ruled Egypt about 1,000 years ago, but some argue that it even dates back to the Pharaohs.

Today, many are still used as backdrops for weddings, funerals and religious celebrations of the Holy month of Ramadan as well as the birthday of Prophet Mohammed known as Mawlid.

Slowing demand, however, has stoked fears among artisans that their craft may be dying, especially as younger generations prove reluctant to learn the trade, preferring a more stable source of income.

Khayami says it’s hard to know the exact number of Khayamia craftspeople left as many work from their homes or workshops outside the area.

But he said the number on the street has been dropping for years, down to around 20 from 60 in the 1980s.

A similar figure was provided by Mamdouh al-Sheribini, the executive director of the Handicraft Industry Chamber.

“The pace of people abandoning the craft has increased since 2011. Young people do not have the patience for learning a craft that takes time to master,” Khayami said.

“They cannot handle the market’s ups and downs, like us.”

Abdullah Fathy, a 31-year-old Khayamiya maker, also says many leave to start other businesses or find other jobs.

In his shop, Fathy, who learned his craft at 15, usually sits cross-legged on a pillow, bent over a piece of fabric.

It can take him a full workday to stitch one small applique. Other pieces, fanning out across meters, can take a month or even more depending on the intricacy of the design.

Prices can start from as little as 50 Egyptian pounds ($2.7) and go up to several thousand pounds.

But Fathy refuses to abandon his trade.

“If laborers keep leaving one after the other, the craft may soon become extinct,” said Fathy.

Though many craftsmen have sought to promote their products among locals, they still long for the days when their shops would teem with tourists.

“Tourists used to make up about 98 percent of our clientele. It’s usually them who appreciate the effort put into these handicrafts as opposed to Egyptians,” said 48-year old Mahmoud Fatouh, whose shop in Khayamiya has belonged to his family since the early 1900s.

Signs since late 2017 that tourists may be on their way back to Egypt have brought a small glimmer of hope.

“We see tourists more often now,” said Khayami. “It’s not the same as before (pre-2011), but it’s still better than nothing.”

“There is still hope,” he went on.

“So long as the country is stable, tourists will keep coming back,” Khayami added.

Official figures on tourism in 2018 have yet to be announced.

But last month, the Egyptian travel agents’ association chairman, Hossam el-Shaer, said tourists arriving in Egypt increased by 40 percent in 2018 compared to the year before, when the number of tourists reached 8.3 million, according to the CAPMAS official statistics agency.

But that 2018 figure was announced before a roadside bomb hit a tourist bus in late December, killing three Vietnamese holidaymakers near the famed pyramids in Giza.

Shaer maintains that the target for this year is an additional 30-40 percent increase.

For the few tourists visiting the street daily, Khayamiya art remains a draw.

“It is one thing I would be interested in, this textile, especially one of these appliques,” said David Pullins, an American tourist, who visited the ancient street in December.