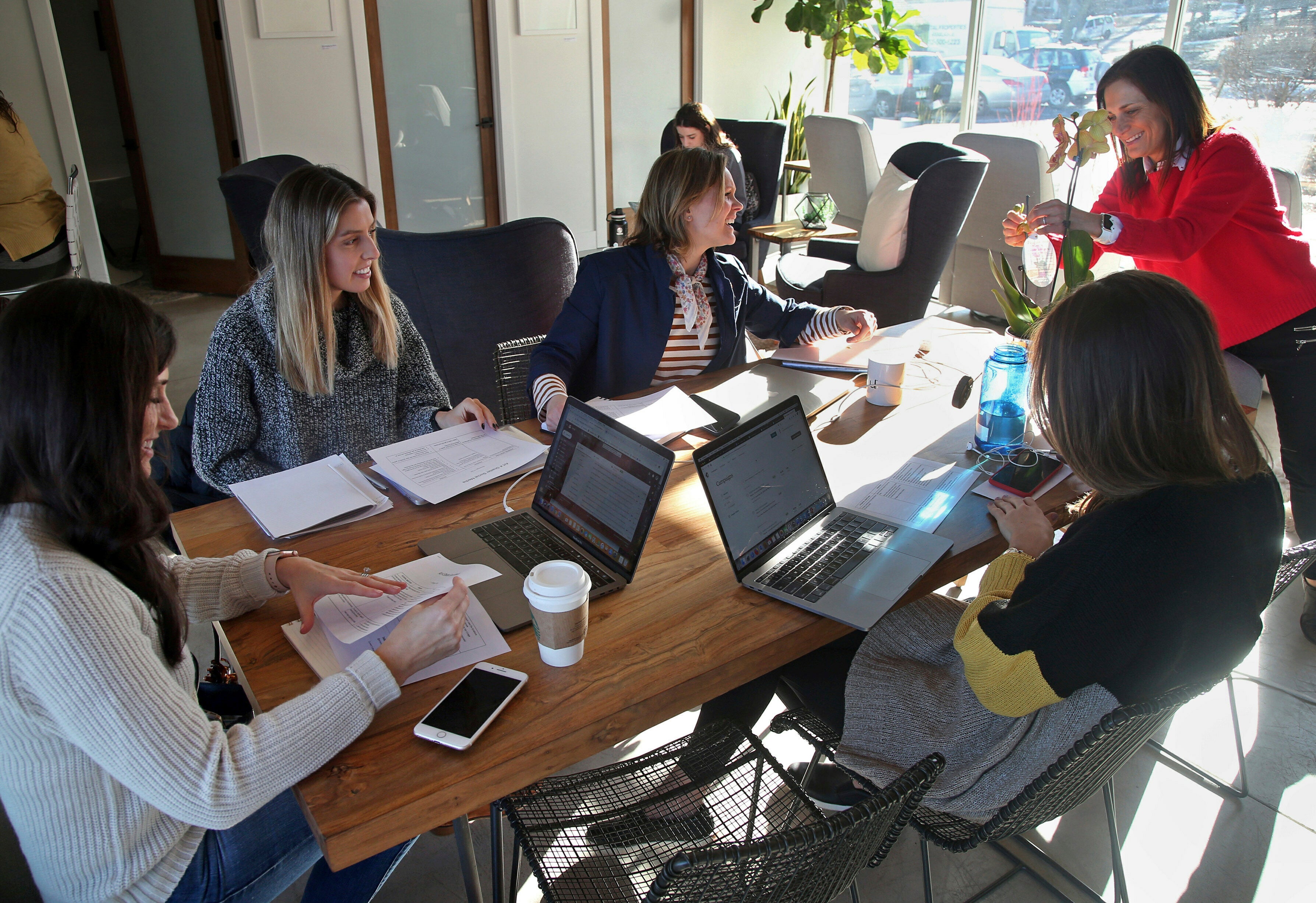 In this Jan. 16, 2019 photo, ModernWell founder Julie Burton, right, arranges flowers as four women confer on a non-profit event in Minneapolis. ModernWell is one of a growing number of women-only and women-focused workspaces around the country. While many predate the #MeToo movement, their growth has been interlinked with it as it put combating workplace harassment on the national agenda. (AP Photo/Jim Mone)

Workspaces centered on women on the rise in #MeToo movement

MINNEAPOLIS — Entering the year-old workspace ModernWell feels like coming into a comfortable spa. Clean lines give way to cozy touches like footstools covered with faux fur and a roaring fire surrounded by comfortable armchairs. Women type away on laptops at tables scattered throughout.

There is not a man in sight.

ModernWell is one of a growing number of women-only and women-focused workspaces around the country. While many predate the #MeToo movement, their growth has been interlinked with it as it put combating workplace harassment on the national agenda. They’re also tapping into a desire among many women to build a community and supportive environment at work that’s different from a stereotypical corporate workplace culture.

The spaces provide more than just desks and a coffee machine. They offer programs like high-profile speakers or yoga classes, and a chance to build a social and business network with like-minded women. It’s like WeWork, minus the beer on tap and tech bro atmosphere.

“I think women, especially, are craving safe spaces where they can go and be inspired and do really important work without interruption, and without being reminded of all that, too. There’s literally no risk that somebody’s going to sexually harass me here,” said Renee Powers, a ModernWell member who founded her business, Feminist Book Club, in the space.

The biggest player is The Wing, which opened in 2016 in New York and has been expanding rapidly across the country. Its San Francisco location opened in October with a nod to the #MeToo movement, naming a conference room after Christine Blasey Ford, who testified before Congress that Supreme Court nominee Brett Kavanaugh had sexually assaulted her in high school. Kavanaugh denied the allegation and was confirmed to the court. Membership to use one location costs $2,350 annually, and the company now has more than 6,000 members, spokeswoman Zara Rahim said.

Most of the spaces allow men, but some do not. The Wing was sued by a Washington, D.C. man who alleged discrimination. Its board soon after approved a membership policy providing that an applicant’s gender identity would not be considered, a development first reported by Insider. Rahim said the policy was being developed before the lawsuit and was unrelated to it. The Wing is also under investigation by the New York City Commission on Human Rights for gender-based discrimination. The Wing said it is working with the commission.

Another fast-growing space is The Riveter, with five locations in Seattle and Los Angeles and plans to open in Austin, Texas, in March. About 20 percent of its members are building venture-scale startups, but the majority are small businesses with just a few employees, or people who work on their own such as lawyers or real estate agents, founder and CEO Amy Nelson said. It ranges from $99 to hundreds of dollars monthly.

About one-quarter of The Riveter’s 2,000 members are men, Nelson said, but the difference is that “out of the gate we’re putting women first.”

“I think that we’re seeing a societal shift that isn’t going to go away,” she said. “Women’s voices are being heard.”

The space has brought in high-profile speakers such as Sheryl Sandberg and offers activities such as office hours with a venture capital firm and seminars on digital mindfulness or wellness. That kind of programming sets the spaces apart from more general ones, said Steve King of Emergent Research, who studies the future of work and the rise of the independent workforce.

ModernWell founder Julie Burton, an author and wellness instructor, teaches yoga at her space, which also offers events such as a class on women’s memoir writing. Burton said her space grew out of a writing group she co-founded in 2015, which coincidentally was women-only. After the 2016 presidential election, she said many women she knew were upset and she felt galvanized to build a business to help women support each other and empower themselves.

“Whether you are out marching or not marching, I felt we had work to do, and I wanted to be part of the work,” she said.

The space has given women from different industries and professional backgrounds a chance to connect, she said.

Those connections help women support each other, battling feelings such as “imposter syndrome,” where women question whether they have the qualifications to start a company or embark on a particular venture, Burton said.

That community feeling is what draws some women to the spaces, said Jamie Russo, executive director of the Global Workspace Association.

Co-working spaces in general are on the rise, and as the sector grows, different niches have developed to serve different groups, such as attorneys or people working in real estate, technology, big data or artificial intelligence. For the operators, niche spaces tend to be more profitable than more general workspaces, Russo said.

An analysis by King’s firm estimated more than 14,000 coworking spaces and 1.7 million members globally in 2017 and forecast around 30,000 spaces and 5.1 million members by 2022. There’s little data about women-centric spaces, and while the segment is growing, it is expected to remain a relatively small niche in the industry, King said.

Some spaces offer child care, but until now it’s been rare, likely due to complicated state and local laws around child care, King said. That may be changing. The Wing will offer child care starting this week in one of its New York City locations and soon in Los Angeles.

Jasna Burza, a life and business coach, has a home office but prefers to do her work at ModernWell, where there is a community of women to greet her. She compares coming to the space to the old TV show ‘Cheers,’ where everyone knows her name.

“It can be really isolating to be on my own,” Burza said. “I come here, and it’s my happy place.”