Mom, daughter escape car before it was hit by train | Lifestyle.INQ ❮ ❯ 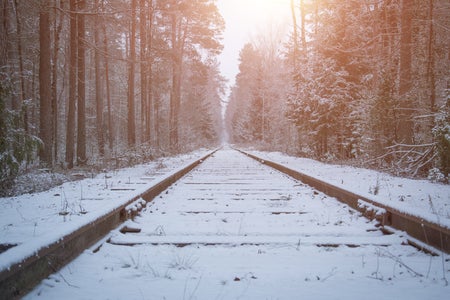 Mom, 4-year-old daughter escape car seconds before it was hit by train

A mother and her child nearly faced tragedy when they narrowly avoided an oncoming train in Canada.

Amanda Collins’ car got stuck in snow when she drove over a railway crossing in Quebec, the Canadian Broadcasting Corporation (CBC) reported on Thursday, Jan. 24.

The 32-year-old mother was on her way to fetch her son from school at around 3 p.m. In the car with her was her 4-year-old daughter.

Collins managed to get over the first set of train tracks when the car halted on the second set due to the deep snow.

She recalled trying to reverse and move forward to no avail. The train blared its horns as it came closer and she and her daughter exited the car.

Collins told Global News that she jumped out of the car and ordered her daughter to get out.

“She unbuckled her seat belt just as I had got out of the car,” she said in the report. Collins grabbed her from the back seat to get to safety.

Her daughter screamed as the Canadian National freight pummeled their sedan. There is most damage on the back passenger seat, where her daughter was seated.

Collins, a single mom of two, said she will not be able to get a replacement via her insurance coverage and that she was still paying off the cost of the car. Her friends have launched an online fundraiser to help her buy another vehicle.

She said she is grateful that she and her daughter are alive. She told CBC, “I could have been waking up in a hospital room. It was really close.”

The City of Île-Perrot in southwestern Quebec said it had just plowed snow from the roads an hour before the accident, but Collins refutes this.

Canadian National is investigating the incident and said that the trains were running slower than usual due to the bad weather. Niña V. Guno/JB

‘Sorry you rode into me’: Driver issues ‘non-apology apology’ to boy he hit in car-bike accident