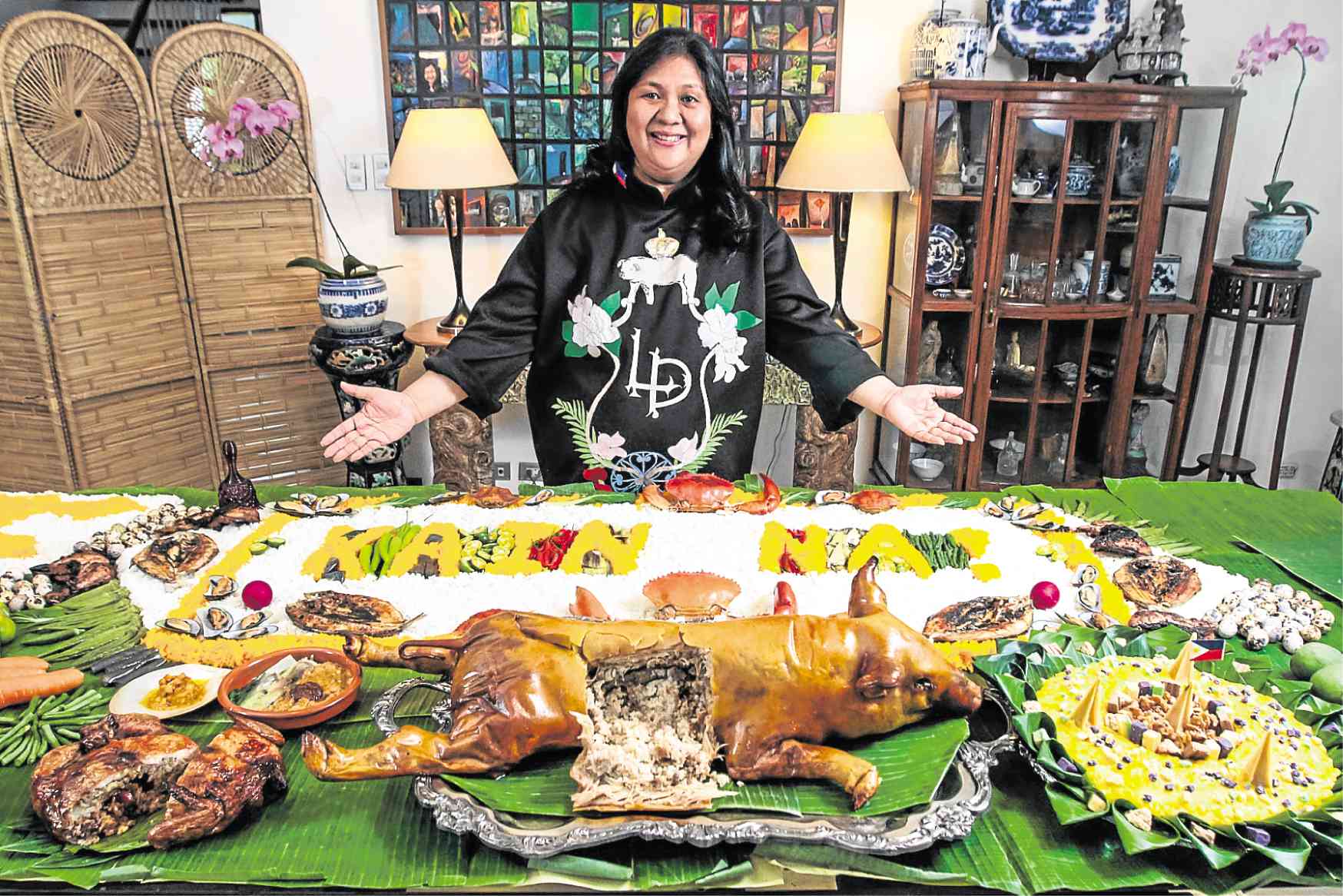 Dedet de la Fuente believes that the Year of the Earth Pig will be an auspicious year for her and her famed lechon (roasted pig) business, Pepita’s Kitchen.

For her, business will flourish and more and more people will get to appreciate what she does in pushing for the Philippine food in the world culinary map.

In fact, while holding this interview, she was already prepping herself for a flight to Bangkok for an exclusive lunch presentation at Sorn, a Michelin-star restaurant. Popular social media personality David Dudi Califa (aka The Hungry Tourist) invited De la Fuente to serve her exquisite stuffed lechon and her Pinoy Boodle Feast which Califa had tried and fell in love with when he visited Manila last year.

“Aside from my lechon, Hungry Tourist enjoyed my Boodle Feast which I thought would not stand out. But, it did,” she said.

De la Fuente has become an instant kitchen celebrity for her creative and delicious variations on the stuffed lechon, from truffles and binagoongan to paella, sisig and laing, to name a few.

These days, her own version of Filipino’s boodle fight is also getting much attention—the food is laid out on banana leaves and everyone eats with bare hands while feasting on  grilled meat and fish, steamed crabs and shrimps, quail eggs, fried rice, salted egg and tomatoes—practically everything Filipinos love on their table.

Of course, the centerpiece of he generous spread is De la Fuente’s succulent lechon.

“Actually, I prefer to call it a boodle feast because with Pepita’s Kitchen it’s never a fight, it’s always a feast,” she explained.

De la Fuente’s Bangkok stint would be  just one of several proofs her stuffed lechon has become popular. Her Truffle Lechon (fragrant truffle rice and mushroom stuffing)  even won the Tastiest Food in Asia in the Annual Chowzter Award in London.

She has brought her lechon to New York, Hong Kong, Singapore and Thailand.

In Manila, she consistently bagged the Ultimate Taste Test organized by Our Awesome Planet’s Anton Diaz. She also gets frequent invitations to present her lechon in various restaurants and hotels, including Diamond Hotel Manila, Manila Hotel, and Bluewater Maribago Resorts.

“I’ve brought my lechon to different parts of the world and I was truly confident,” she said. “However, there was only one place that I visited that made me really nervous—Cebu.”

Everybody knows Cebu’s lechon is hands-down the best and most delicious. Yet, when De la Fuente served her stuffed lechon before the hotel guests and a group of Cebu media, she got good feedback that enabled her to heave a sigh of relief.

“People started coming up to me and said, ‘I’m a Cebuano. I came here because I wanted to taste your lechon and it was really good,’” she said. “One writer even said to me, ‘Cebu lechon has finally met its match.’”

De la Fuente has always loved cooking since she was young. As an only child, she was free and happy to go to wet market and play around the kitchen. Every summer, aside from enrolling in Hawaiian dance, she would also take classes with Sylvia Reynoso.

In grade school at St. Theresa’s College and and high school at St. Scholastica College, she would bake and sell light and dark bars, cookies and mango bars.

She finished BS Fine Arts in Advertising at the University of Santo Tomas. But her parents, both lawyers, wanted her to take up law.

“But it was too much pressure for me,” she said. “My dad was a fifth placer in the Bar exams, while my mom was sixth placer. I was afraid. I might not live up to their expectations. My dad was also top 3 in the CPA exams. That’s why I took the other route. My personality was not cut out to be a lawyer.”

After college, she worked as an executive assistant to her mom, who was then a presiding judge of the Court of Appeals. Her dad was a Supreme Court justice.

She also worked in private firms and ventured in different businesses, including ready-to-wear, burger joints and a dim sum place.

Before she discovered a pot of gold in lechon, she was a sought-after photographer. She ran a studio, Sweet Dreams Photography, and would often be invited to do pictorials in Amanpulo.

Her love affair with lechon began after she enrolled a lechon class under Inquirer Lifestyle food columnist Reggie Aspiras.

“I’ve always wanted to learn to cook lechon because you can only have it when it’s a celebration,” De la Fuente said. “For three years, I was looking for a lechon cooking class. I called Reggie so many times until she finally agreed to hold a class for a small group of people.”

Aspiras taught her the basics of cooking/grilling the lechon, proper stuffing of herbs, and where to get the best pugon oven in town.

Her first attempt in making a lechon, she stuffed it with her favorite binagoongan rice.

“I put the rice as stuffing just in case the lechon was a failure,” she said. “At least, we have something to eat after.”

It turned out really well. She then started inviting friends over to her house in Magallanes. Her friends and friends’ friends enjoyed it, too.

She never intended her cooking to be a business, but her close friends prodded her to join the Ultimate Taste Test in 2010. She entered her Lechon with Binagoongan Rice stuffing and she brought home the top award.

Her success has never stopped since. She has expanded her stuffed lechon line with sisig rice, truffle rice, ham rice, Hawaiian rice, etc. She’s ventured into private dining and home catering. In 2012, she launched her Hayop de Degustacion, which features a 12-course Filipino feast with Pepita’s Kitchen stuffed lechon as the main star.

Her first Boodle Feast happened in 2015 when she was asked by actress Marian Rivera to prepare a surprise birthday dinner party for her husband, actor Dingdong Dantes.

It was a lavish spread of java rice with grilled meat and seafood and fruits. Later on, in her boodle spread, she would add as décor miniature kalesa, Choc-Nut and Philippine flag. Desserts include the Super Suman, Mais Mousse, Banana Cue, Turon and Mango Trifle.

Year of the Pig

With her success here and abroad, De la Fuente said she had a lot to be thankful for.

“I was just an average student, never won an award not even a loyalty award. But, I am happy with the way my life is going and the blessings I receive each day.”

She added, “I am not a planner. I think it’s also my gift because I get to see things when the opportunity is there and so I take it. There are no disappointments. I hope this is right and, so far, I think I’m right. I don’t want what ifs in my life. I will always try and if it doesn’t work out at least I’ve tried. ”

She said she hopes that this year would be a much bigger year for her lechon and for Filipino cuisine in general.