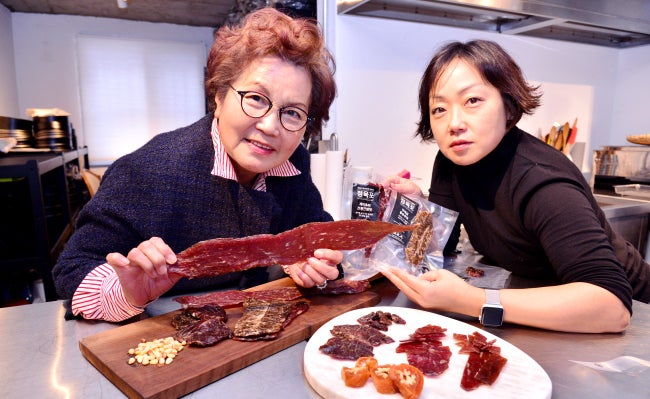 Ban Ga Won CEO Kim Jung-ja and her daughter Kim Ji-yoon pose with Jung Yook Po beef jerky products at the brand’s cooking studio in Eunpyeong-gu, western Seoul. The beef jerky is made with quality beef from Pyeongchang, marinated with soy sauce and dried naturally at the city in Gangwon Province. The Korea Herald

Korean beef jerky dreams to be charcuterie for the world

Depending on the regional characteristics, the details may vary, resulting in different flavors and textures. The most well-known products are probably strong-flavored Singaporean and American beef jerky.

But although it is not widely known to younger people, Korea has its own kind of beef jerky, yukpo, that was served at important events in the past. Even these days, it is offered at traditional wedding ceremonies.

Then, what is important in making a good traditional Korean beef jerky? According to Kim Jung-ja, the CEO of Ban Ga Won which runs an artisan beef jerky brand Jung Yook Po, it is all about the soy sauce used to cure the beef, which Kim makes herself.

“I cannot compromise, when it comes to making ‘the right’ food,” Kim told The Korea Herald at her cooking studio below her apartment in western Seoul.

The studio was full of beef jerky gift sets, ready to be shipped out for the Lunar New Year holidays.

It has been just a year since Kim turned her hobby into a business. Born with a talent for cooking, she has made food for people’s weddings and events. Out of all the foods, beef jerky was the most popular item.

Branding came easily, using the “Jung” from her name. But it ended up meaning more than just that, as the Chinese character for Jung refers to being right, straight and honest — the values Kim pursues with her food.

Pyeongchang, of course, cannot be left out. The Gangwon Province town where the winter Olympic Games took place last year holds exceptional meaning for Kim. She dries the beef jerky in there.

“Starting the business last year, I sought a place with good wind and good beef. The answer was in Pyeongchang,” Kim said. “I dry thinly-sliced beef at an altitude of 700 meters. It is very important to dry the beef under the right conditions. One factor goes wrong, and the beef will not taste right.”

Receiving unrefrigerated beef straight from a local butcher, Kim marinates it using traditional house-made soy sauce. Then, she dries the marinated beef for a week or two, depending on the weather.

Kim uses three cuts to make beef jerky: eye of round, top blade and chuck tender. Depending on the cut she uses, the taste differs greatly, with distinct mouthfeels. Her beef jerky has a blackish red hue, unlike the bright red products normally found in supermarkets.

For Jung Yook Po, the challenge is about battling the prejudice against beef jerky. Factory-dried beef jerky is common here, creating an image of it as a cheap snack rather than being a delicacy.

Though often served at traditional wedding ceremonies, beef jerky is treated almost as a decoration, just something to visually complete the banquet table.

Here is where Kim’s daughter Kim Ji-yoon, who has experience working for marketing agencies in Korea abnd overseas, comes in. The mother and daughter are promoting their beef jerky as a form of charcuterie, like jamon in Spain and prosciutto in Italy.

“Tasting similar to barbecue or galbi, the flavor can appeal to younger generations and foreigners,” the daughter. “It is something that they know, but tastes different.”

The daughter Kim has been introducing the beef jerky in a new style, similar to how jamon and prosciutto are made. At the interview, she displayed the beef jerky on a charcuterie board, as if it were served at a wine bar.

“The beef jerky forms a great marriage with heavy, dry wine, such as Malbec,” she said, spreading truffle-flavored honey and powdered pine nuts on the beef jerky, creating a bite full of flavors.

“You know, we make really traditional food, using handed down techniques,” the mother Kim said. “But in a way, it is so modern and convenient, suitable for young people who prefer simplicity.”