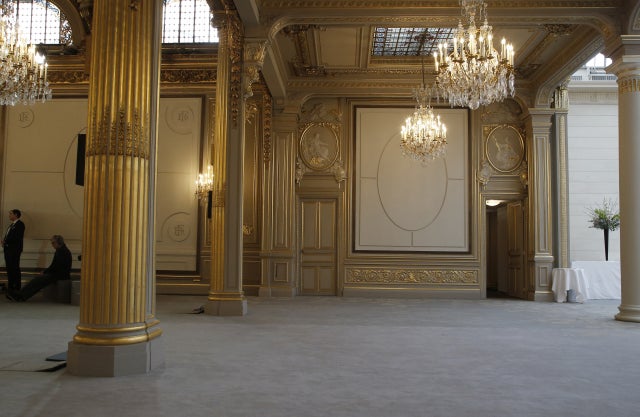 A general view of the newly-redecorated reception hall of the Elysee Palace in Paris, France, on February 1, 2019. Image: Michel Euler / POOL / AFP

From gilt to grey, Paris Elysee hall gets subdued makeover

The most prestigious room in France’s grand presidential palace has toned down the gold in favor of a subtle palette of grey after a months-long renovation that was unveiled to the public Friday.

Out are the regal red carpets and elaborate tasseled tapestries which lined the walls of the Elysee Palace’s main reception hall, some of which had hung there for the past 40 years.

In their place are subdued dove grey carpets and curtains embroidered with leaf motifs, against walls bearing the superimposed Rs and Fs of the French Republic.

President Emmanuel Macron and his wife, Brigitte, have made no secret of their desire to update the Elysee, bringing in modern artworks from Pierre Alechinsky, Robert Delauney and Nicolas de Stael to mirror their more progressive tastes.

The 1,000 square-meter (10,700 square foot) reception hall, called the Salle des Fetes, is where Macron hosts some 160 state dinners, receptions and other events each year.

The hall, which was inaugurated in 1889,  had been closed since November as part of a renovation which cost 500,000 euros ($573,000 or almost P30 million) a price tag likely to raise eyebrows at a time when Macron is facing virulent street protests over high costs of living.

The former investment banker has struggled to shake off the label of “president of the rich” coined by critics early on over his tax cuts for business and wealthy investors.

He famously told an unemployed gardener in September he only had to “cross the road” to find work.

The following month he told a retiree complaining about tax hikes on pensions that the French “did not realize the luck they have” and they should stop complaining.

The government argues the restoration work is necessary — the Elysee palace building dates from the early 18th century — after being put off for years, and points to its launch of a new collection of Elysee-branded memorabilia to help defray the costs.

“We take the responsibility of conserving these historic monuments very seriously… while also taking into account the limits on our public spending,” an Elysee official said.

The hall is intended to be “a showcase of French excellence and craftsmanship”, the official said. MKH

6 things to know about the Eiffel Tower