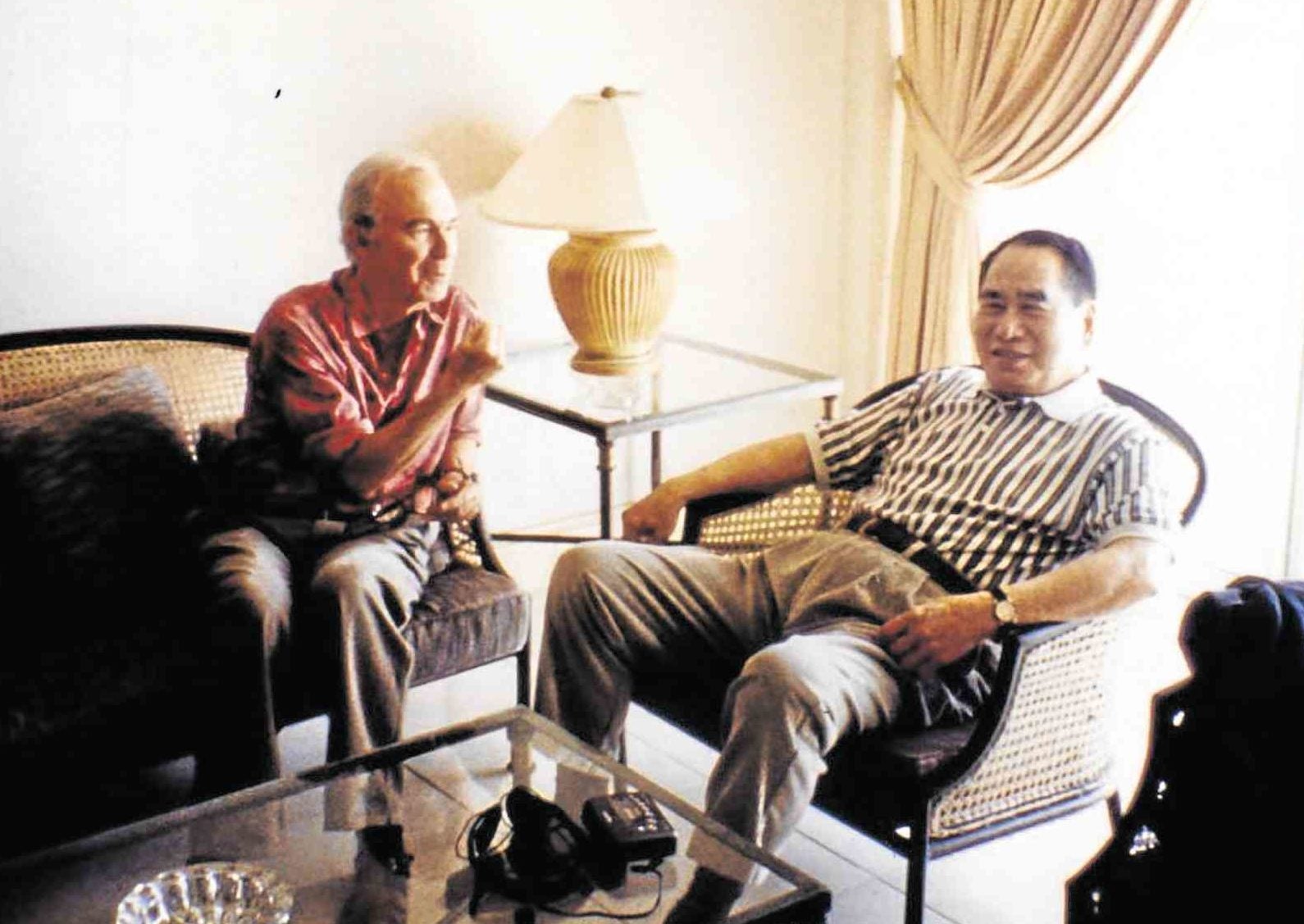 Juvenal Sanso and Henry Sy Sr. in an early photo from Fundacion Sanso

There’s one image of Henry Sy Sr. that remains on my mind, that of a private moment of the tycoon—spent with another tycoon, Eugenio “Geny” Lopez Jr.

It was in late June of 1999. Meralco Theater, vast as it was, was packed with mourners earlier that evening. Now that it was close to midnight, the crowd had thinned, leaving some theater seats empty. Only mostly Lopez Group employees had stayed behind.

Up front, just below the stage, on a generous but elegantly spartan space before the front row, was the coffin bearing the remains of Geny Lopez Jr. The sight was simple and stark. The sight was sad.

It was indescribably sad for the family, friends and employees he had left behind. The stillness was punctuated by the soft light trained on the bier.

From the side walked in a man in printed short-sleeved shirt. Alone, he headed straight to the bier, and stood there. It was Mr. Sy.

A minute went by, then a few more minutes, and some more minutes. The taipan just stood before the bier, his eyes focused on the face of a dear friend who was lying in state. The taipan seemed oblivious to the many eyes watching him.

Clearly, it was Mr. Sy’s moment with Mr. Lopez, who had died that June 28 in San Francisco from a sudden recurrence of cancer. Perhaps not many knew then, and not many remember now, how the two giants of Philippine business and industry had struck a friendship years after Mr. Lopez’s return to the Philippines after the 1986 Edsa People Power Revolution, from years of exile in the US.

The mutual respect they had for each other, and the affinity arising from it, became apparent when Mr. Sy joined the ABS-CBN board briefly. This was in the ’90s, before Mr. Lopez’s passing.

Against such a background of the two men’s stature in society, the sight before us became all the more touching.

Mr. Sy wasn’t moving from his lonely stance, even after interminable minutes had passed, the poignant silence broken only by a wayward whisper of an observer seated nearby: “Para silang nagbo-board meeting.”

Indeed, if only we could decipher what Mr. Sy must have been “telling” his friend, as he stood there for the longest time. A reluctant goodbye? A heartfelt gratitude? A prayer for eternal peace?

It was a touching, rather long, farewell between two giants dearly loved by many for their vision and humanness.

We were fortunate to have dined with Mr. Sy about a couple of times before that.

After our Lifestyle in Manila Chronicle ran an agenda-setting piece on a phenomenal Filipino consumer behavior called “malling”—our team coined the “malling lifestyle”—and gave Mr. Sy credit for his vision, Mr. Sy invited us and leading newshen Jullie Yap Daza to a private dinner in a Chinese restaurant at SM North Edsa, arranged by his PR, Millie Dizon.

It was Mr. Sy who chose the dishes at the dinner, and we got a glimpse of how well the tycoon knew his food, particularly Chinese cuisine. That dinner was one of the most authentic Chinese meals we had had—I remember the shark’s fin soup (this was way before the delicacy became a no-no) and a yam dish. He spoke about the differences among the Chinese regional cuisines.

And in that dinner chat, prodded on by Jullie, Mr. Sy told us how he didn’t believe in mainstream feng shui—because instead, he followed his own feng shui. His number one rule, he said, was that the structure must look solid, which explained why the early SM stores were solid chunks of concrete, with practically no windows. The building must be heavy-set, he stressed.

Jullie also asked him about shoes, and his feel for them—he’d put a shoe in his palm.

We were glad that he was high-spirited at that dinner.

Before such close encounters with him, we’d learn about Mr. Sy from stories recounted by the foremost artist, Juvenal Sanso.

Sanso loved to recall for us how in the post-war years, his family struck a friendship with their neighbor—a young Henry Sy. Sanso’s family (the artist had only one sibling) had come to trust the young neighbor, so that the whole family could go on long vacations and entrust their home to Mr. Sy.

The friendship between the emerging businessman and the emerging artist went beyond the lifetime of Sanso’s parents, and into the final years of the tycoon.

When SM City opened in Cebu—its first in that province—we had another chance to dine with Mr. Sy, also with Jullie and Millie. This time we were with Mr. Sy’s taipan friends from Cebu, who included a Mr. Luym and a Mr. Go Thong.

It was a small dinner table for only six or eight, set on the beach front of a relatively new Shangri-La Mactan, an al fresco gathering. Mr. Sy and his friends marveled at the new posh resort hotel and its impressive landscape.

What we noted at that dinner was Mr. Sy’s comment on what it would take for a hotel to have viable operations—he was computing, mentally, the number of rooms needed and discussing it with his friends. It was our glimpse into the innate business acumen of the tycoon, and how agile his mind was.

This was in the ’90s. Mr. Sy wasn’t only a retail builder then, he was already a visionary property developer. Years later, he opened Radisson Blu in Cebu.