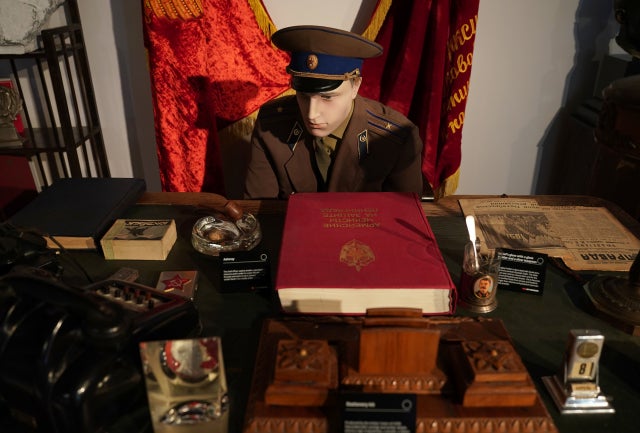 A sample of some of the items on display at The KGB Spy Museum in New York. Image: TIMOTHY A. CLARY / AFP

Assassinations in broad daylight. Ruthless agents plotting undercover. Bugging devices in every Western capital. Three decades after the fall of the Soviet Union, the specter of the notorious KGB still looms large in the public imagination.

Now, a Manhattan museum offers a time-traveler’s plunge into the world of the Cold War-era spy agency, complete with portraits of Vladimir Lenin on the walls, military music in the background and high-tech espionage devices galore.

The KGB Spy Museum is the brainchild of a 55-year-old Lithuanian historian Julius Urbaitis, who spent three decades traveling the world to gather the 3,500 original artifacts brought together in its cavernous exhibition hall.

Housed on Manhattan’s West 14th street, dozens of period objects showcase the cutting-edge technology used by the KGB’s spies to steal a march on the Soviet Union’s rivals — chief among them the United States.

There are dozens of cameras designed to be concealed in buttons, belts or accessories. There are lipstick guns, miniature microphones, and shoe heels with secret caches for documents.

There is a replica of the “Bulgarian umbrella” used in 1978 in London to fatally poison Bulgarian dissident Georgi Markov in one particularly infamous Cold War episode.

Also on display, a wooden carving of the Great Seal of the United States that came to be known as “The Great Seal Bug” — or simply “The Thing.”

Presented as a gift to U.S. Ambassador Averell Harriman in 1945 — it was bugged with a miniature microphone powered by electromagnetic energy, pioneering technology for the time — and enabled Soviets to eavesdrop on conversations inside his Moscow study until it was uncovered seven years later.

As an optional extra, visitors can take a tour with a Russian-speaking guide, such as Sergei Kolosov, a former detective with the Saint Petersburg police who remembers using some of the items on show.

Urbaitis and his daughter Agne Urbaityte, 29, describe themselves as co-curators of the show, whose owner is an American company which includes several art collectors, and which wishes to remain anonymous.

The collectors had heard of research by the father-daughter duo who a few years back converted a disused nuclear bunker into a KGB museum, in their home city of Kaunas, in Lithuania.

Annexed by the Soviet Union during World War II, Lithuania only regained independence after the Soviet bloc fell in 1991, when Urbaitis was 27 years old.

“The Americans came to Lithuania several times and asked if I could make a museum in the United States,” he said, speaking mostly in Russian.

“They didn’t want someone who didn’t know the (Soviet) regime.”

While the museum does depict harsh KGB tactics — for instance through a model of an interrogation chair — some critics have taken issue with its seemingly light-hearted approach to a deadly legacy.

Urbaitis counters that his project is “apolitical” and his goal simply to “make this museum the best in the world about KGB technologies.”

‘The iPhone is the best spy’

For proof of the enduring fascination with the KGB, look no further than the runaway success of the long-running TV series “The Americans,” loosely inspired by the story of a couple of Soviet spies living under deep cover in U.S. suburbia.

The new museum welcomed hundreds of people in its first few days.

“It’s an indication of how our two countries, Russia and the U.S., were constantly trying to gain secrets one to the other,” said Jim Lytle, who was among its early visitors.

While the Soviet Union is long gone, and the technology has evolved beyond recognition, allegations of espionage dirty tricks continue to swirl around modern-day Russia and its leader Vladimir Putin, a former head of the FSB, the main successor to the notorious KGB.

Across the Atlantic, meanwhile, the special prosecutor investigating Russian meddling in the 2016 U.S. election has brought charges against 25 Russians including several from the country’s GRU military intelligence agency.

“We are in a different war now,” commented Lytle, a retiree from the advertising industry.

“Now it is a war of ideology more so than threats about an atomic bomb and mass destruction. Today a lot of it is on the internet and social media.”

But for Urbaitis, the source of fascination lies firmly in the past, and he has little interest in documenting modern-day spy techniques, often relying on everyday connected objects.

“The iPhone is the best spy. Our computers are the best spies,” he says. “Now we are giving information ourselves. It’s easier for the agents.” NVG