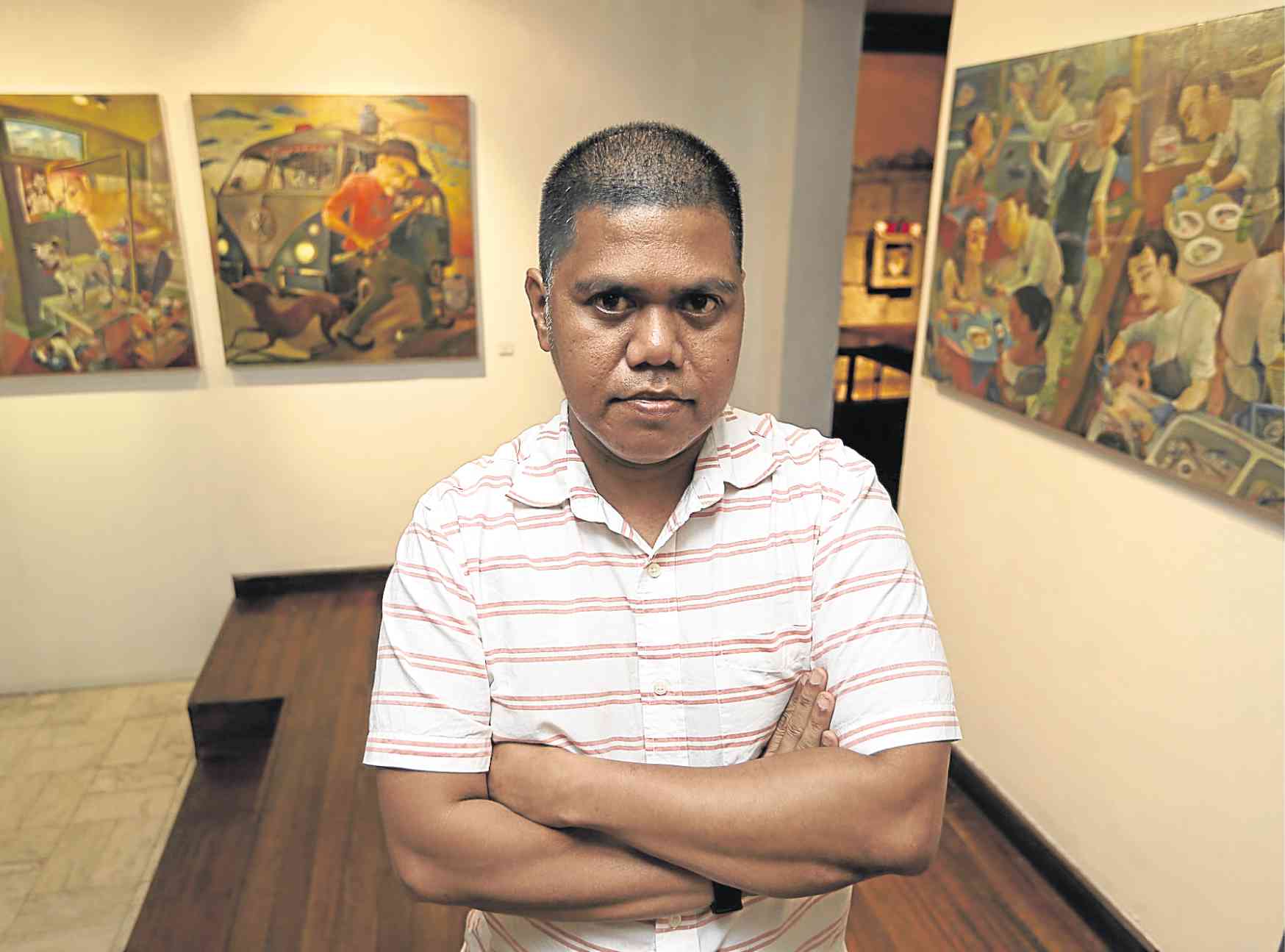 “There’s this young artist from Aklan whose work you’ve got to see.”

So went the text from neurologist, art lover and gallery owner Dr. Joven Cuanang, a man with impeccable instincts when it comes to contemporary painters.

Needless to say, we doubletimed it to the Boston Art Gallery in Cubao for a pre-opening sneak preview of “Human Nature,” Kris Soguilon’s ongoing exhibit.

Soguilon is 46—young, I guess, if you consider that the current crop of Filipino masters are now in their 60s and 70s—but his art is fully formed and distinctive, a kind of social realism with a sense of humor.

The artist, who hails from Kalibo, Aklan, and has lived and worked in London for the past 18 years, paints minutely observed, incident-packed scenes from daily life in the tradition of Brueghel and Hogarth, with distinct echoes of the Saling Pusa painters, but the perspective is his own.

“Human Nature” centers on man’s inhumanity to animals, though Soguilon hastens to mention that he’s no animal rights activist, and in fact adds that his wife thinks the theme is “too European.”

That may well be, but Filipino viewers will instinctively catch on that the artist’s perspective is Filipino, even though many of the scenes depicted in the paintings could be set anywhere.

“The Groomers” takes place in a pet salon where Shih-Tzus receive dye jobs. “Manhandled” shows a circus scene with elephants. “Untitled” is a scene from one of those seafood restaurants where the main ingredients are still swimming in aquariums when patrons come to dine. “Fish Pedicure” shows a fashionable spa where the patrons dip their feet in tubs where tiny fish pick off the dead skin from their feet. One of them, oblivious to the irony, tucks into a bento box of sushi—eating fish while being eaten by fish.

Such is Soguilon’s gently sardonic sense of humor.

The centerpiece of the exhibit, however, could only have come from the Philippines.

“Spoliarium” is a large diptych that shows backstage at a cockfight, where the hopefuls preen on one side of the canvas while the losers are plucked and cooked on the other.

“I’m not a sabungero, but I’ve always wondered what became of the cocks that were killed or disabled,” says Soguilon. “I saw YouTube clips of cockfights, and I modernized it into something like a mixed martial arts arena. In Luna’s ‘Spoliarium’ you can see gladiators training on one side and the dead being carried out on the other side so they can see the aftermath and what happens to their comrades.”

The scene was wholly imagined, he adds—not a lot of chances to catch cockfights in North London. Having been backstage at a pintakasi, I can vouch that Soguilon has captured the mood when the “tinalo” become “tinola.”
There was not a lot of art around where Soguilon grew up.

A summer art workshop was Soguilon’s first hands-on experience with painting. It was so encouraging that after high school, he enrolled in the University of the Philippines College of Fine Arts where he came under the tutelage of Roberto Chabet.

“It was a struggle for me but I learned a lot from him,” recalls Soguilon. “Discipline, how to visualize, how art should not only look good but have something intense to say.”

After nearly finishing his Masters in Fine Arts (one thesis short), Soguilon married Aliza, the girl he had known in Kalibo since kindergarten, and found a job in the aerospace industry in London, where they’re now raising their 9-year old daughter Una.

His style, which involves several stories unfolding on each canvas in the foreground and background, with each character given distinctive individual features, means it takes a while to finish a canvas.

If “Human Nature” is any indication, Soguilon is worth waiting for.