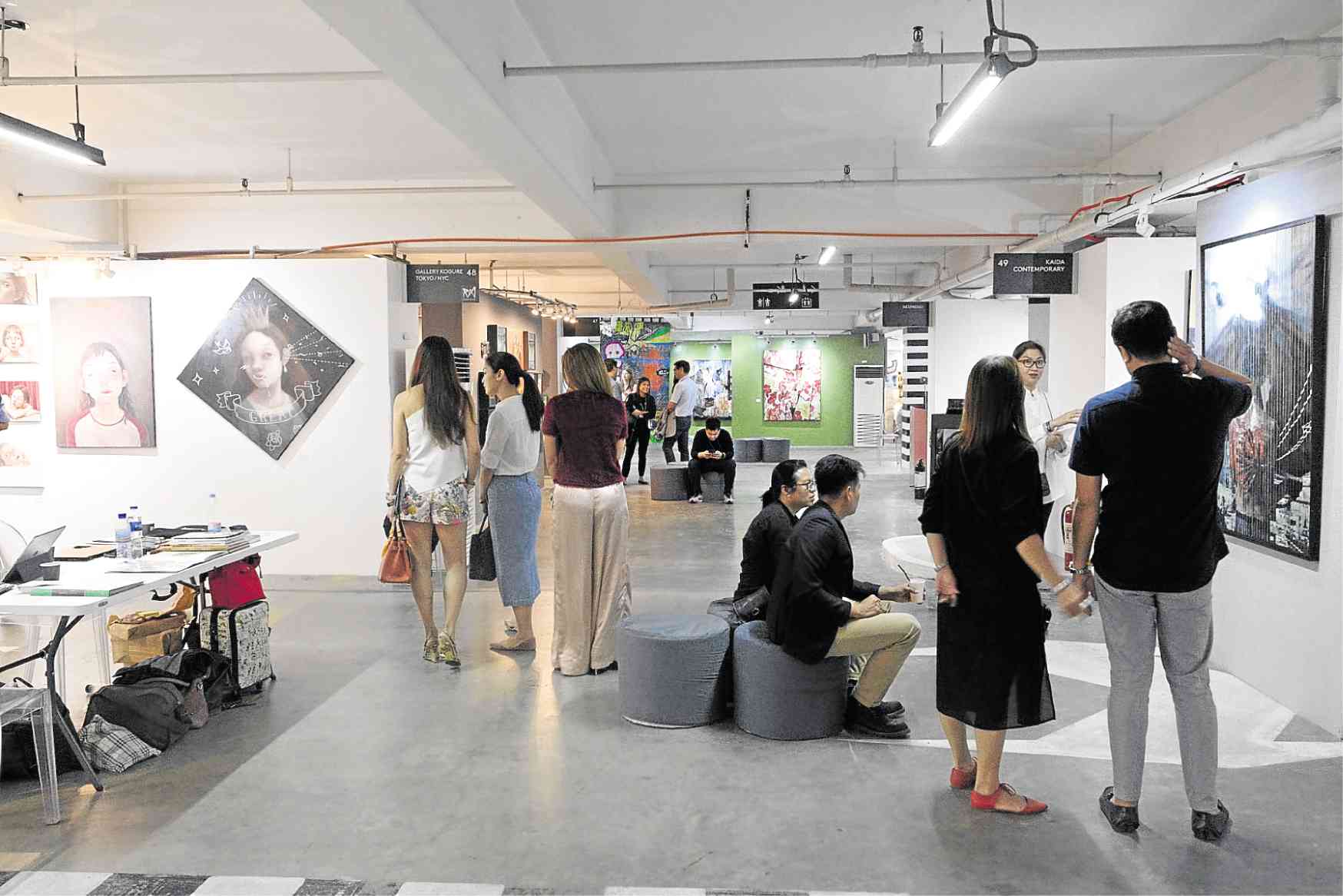 Art Fair Philippines 2019 will again be mounted at The Link, Ayala Center,Makati.

Filipino artists tend to gravitate toward cliques and scenes depending on what school or tendency they belong to—from conceptual art to social realism to pop surrealism to abstraction to whatever.

Each clique has its own leading lights and tends to favor certain galleries and curators. The resulting rivalries between galleries and auction houses— friendly or otherwise—only encourages this tribalism.

In this fractious world, the annual Art Fair Philippines is Switzerland: neutral ground in which a hundred flowers can bloom and a hundred schools of thought contend, for the delectation of the growing art public.

This no doubt has contributed to its wild success. Now on its seventh year, Art Fair Philippines 2019—which will run Feb.  22 to 24 at the Link car park at Ayala Center in Makati—in a way sets the tone for the rest of the art year.

“We try to be as nonpartisan as possible,” says Lisa Periquet, who together with partners Trickie Lopa and Dindin Araneta, is responsible for putting the art fair together each year.

“Even curatorially, we try to be a little bit broad rather than leaning toward one side or another,” she adds. “That’s the whole point of the Art Fair—it tries to be a marketplace of ideas.”

“We try to give a good sampling of what’s out there at this particular point in time, what we think is interesting or important,” adds Lopa. “We kind of have our ears close to the ground so we pick up on the zeitgeist. Plus, there are three of us so we have three different viewpoints and different interests, which kind of balances things out.”

Curators don’t always like this broad approach, especially if they favor a certain school of thought, but even those vehemently against the commodification of art can’t afford to ignore the art fair.

“Art institutions naturally have very strong viewpoints,” says Periquet. “The difference with us is, we’re kind of an institution in a way but we’re a free market. We want to feature quality work that appeals to a broad audience, not just a narrow audience. We’re trying to widen the audience for Philippine art.”

Apart from drawing a much bigger audience than the usual gallery exhibitions, the art fair has also emerged as a major networking opportunity, not just locally but globally. With 36 local galleries and 16 international galleries participating, and the fair itself now calendared by international curators and collectors, the fair is a prime opportunity for Filipino artists to level up their game.

Filmmaker Kidlat Tahimik was commissioned to create a large installation for last year’s art fair. A few months later, he was selected as a National Artist for Film. Photographer Carlo Gabuco was one of last year’s major draws with his harrowing documentation of the war on drugs. A few months after the art fair, Gabuco was selected as one of the Cultural Center of the Philippines’ 13 Artists for 2018.

In short, participation at the art fair has become consequential for Filipino artists, whether emerging or established.

This year’s line-up of commissioned works promises to be another eye- and mind-opener for art aficionados.

To begin with, a major reassessment of three major Filipino artists who for one reason or another have not been given the attention they deserve: David Medalla, the enfant terrible of Philippine modern art (who has lived and worked abroad for much of his career), legendary curator and graphic artist Ray Albano (whose career was cut short by his untimely death at an early age), and Mauro Malang Santos (perhaps unfairly seen as old hat by the younger art audience).

A major draw will be Colombian figurative painter and sculptor Fernando Botero, arguably the best-known living artist to come out of Latin America.

Fabric artist Liv Vinluan is this year’s recipient of the Karen H. Montinola selection, an annual grant by the family of the late collector and champion of young artists.

Experimentation with non-traditional media is something of a sub-theme with the other commissioned works by Ryan Villamael, Oca Villamiel, Ian Fabro, Christina Quisumbing Ramilo and Olivia d’Aboville.

Photography, which made a big splash at last year’s fair, continues to be a major attraction this year with works by MM Yu, Tom Epperson and Denise Weldon and Neal Oshima.

This year’s Art Fair Philippines will also feature the usual added attractions with art talks, including one by Kathy Galitz, curator of the Metropolitan Museum of Art, and the 10 Days of Art initiative, which expands the fair beyond the Link with public art exhibits in various locations throughout the Makati Central Business District.

Tickets for the art fair—P350 for regular visitors, P250 for senior citizens and PWDs, P150 for students with school ID cards, and P100 for Makati students—are available on-site and through www.artfairphilippines.com.