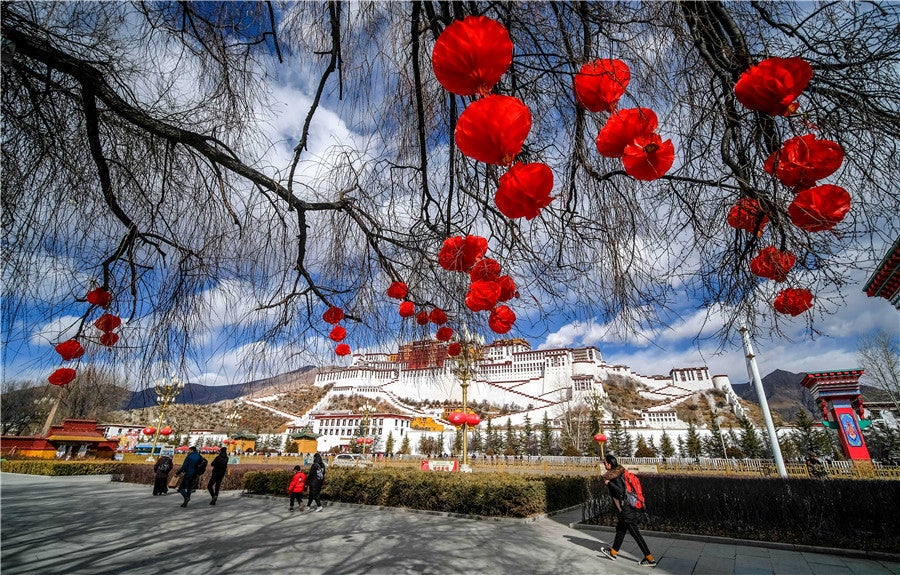 Red lanterns are hung from trees in the Potala Palace Square in Lhasa, the Tibet autonomous region, on Saturday ahead of the Tibetan New Year and Spring Festival, which both fall on Tuesday. HE PENGLEI/CHINA NEWS SERVICE

TIBET — Two days ahead of the Year of the Earth Pig, people in the Tibet autonomous region have geared up for the final preparations of the Tibetan New Year, also known as the Losar celebration.

The alleys around Tsalgongthang Monastery in the regional capital of Lhasa were more crowded than usual on Sunday, and business was booming as people were busy preparing for not one but two New Year’s celebrations on the same day. This year, Losar and Spring Festival both fall on Tuesday.

Losar dates to about 100 BC, the time of the ninth king of Tibet, Pude Gungyal, and the celebration runs as long as 15 days.

The city’s atmosphere was resplendent with holiday spirit. Red lanterns hung from trees and decorations graced the walls of family homes.

A grand religious ritual took place at Lhasa’s Sera Monastery on Friday. Thousands of pilgrims paid visits and prayed for a peaceful and prosperous year.

Tsetan Drolkar, 40, a restaurant owner in the city, said her business boomed last month, and she was excited about taking part in family reunions during the holiday period.

“I do my business in the morning and New Year’s shopping in the afternoon. I have finished frying khasai (wheat strips fried in yak butter), and I am almost ready for Losar,” she said.

Tsetan Drolkar said she would prepare guthuk noodles, an important part of a ritual during Losar.

Chili pepper is sometimes wrapped inside noodles and boiled together with the soup.

“Anything you find in your guthuk has a symbolic meaning. For example, chili peppers represent loquaciousness, and salt symbolizes laziness,” she said.

“I expect to see beans and onions in my bowl tonight,” she added, saying the two represent harmony and profitable business, respectively.

Tenzin Nyandrak, the eldest son of Tsetan Drolkar, said the holiday meant playing games and spending time with his grandparents.

“I am looking forward to visiting monasteries in the countryside together with my parents during Losar,” said the 13-year-old.

“We will have competitions with other kids, and I want to win as the best archer,” said Tenzin Nyandrak, adding that he also wants to set off fireworks.

Losar usually lasts for around two weeks, and the family plans to visit their relatives and have many gatherings during the period.

As a New Year’s wish, Tsetan Drolkar said she hopes everyone will be happy, healthy and wealthy.

“As for myself, I hope to have better business in the new year, and see the whole world enjoy peace and prosperity.”