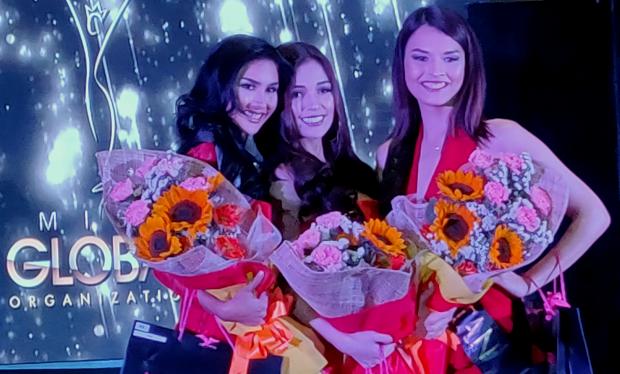 Darling of the Press Eileen Gonzales of the Philippines (center) with her runners-up Pamela Lee from the United States (left) and Tamila Khodjaeva from Uzbekistan. (Photo by ARMIN P. ADINA / Contributor)

MANILA, Philippines — Eileen Gonzales, a 22-year-old single mother from the Philippines, topped the poll for Darling of the Press at the Miss Global 2018 pageant.

She was chosen from among 46 international delegates who were introduced at the press presentation held at the Seda Vertis North in Quezon City on Monday afternoon.

“This means a lot to me. And this is an international pageant we’re talking about,” Gonzales told the Inquirer.

“As a single mom, I believe that if you have that faith in yourself, then just go chase your dream, whatever the circumstances may be,” she added.

Gonzales was followed by Pamela Lee from the United States and Tamila Khodjaeva from Uzbekistan in the media poll.

Khodjaeva, a model singer, is professionally known as Tamila Sparrow.

The Miss Global pageant is the only international contest for single women to accept mothers in the competition.

This is the third time for the Philippines to host the global pageant. It was first held here in 2015 and 2016.

This is the pageant’s sixth installation. Technically, it’s the 2018 edition.

The finals will be staged at the Newport Performing Arts Theater of Resorts World Manila in Pasay City on Feb.11. /atm