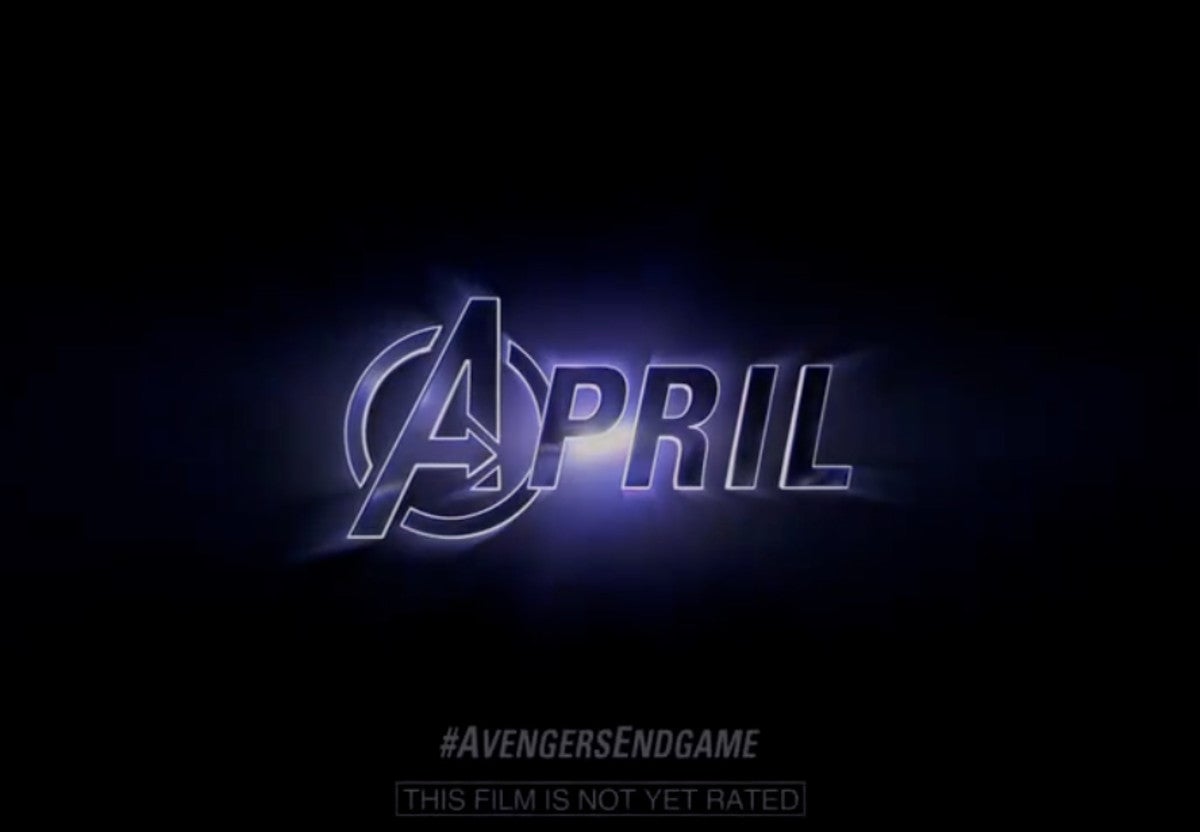 As fans and longtime Marvel Cinematic Universe (MCU) followers predicted, Marvel Studios dropped the latest “Avengers: Endgame” trailer during Super Bowl LIII, held on February 3 in the United States (February 4 in the morning here). This is a particularly parsimonious trailer, being only 30 seconds long.

The trailer is fascinating, as it is entirely made up of scenes we haven’t seen before, and actually does reveal new things about “Avengers: Endgame,” which premieres on April 26. 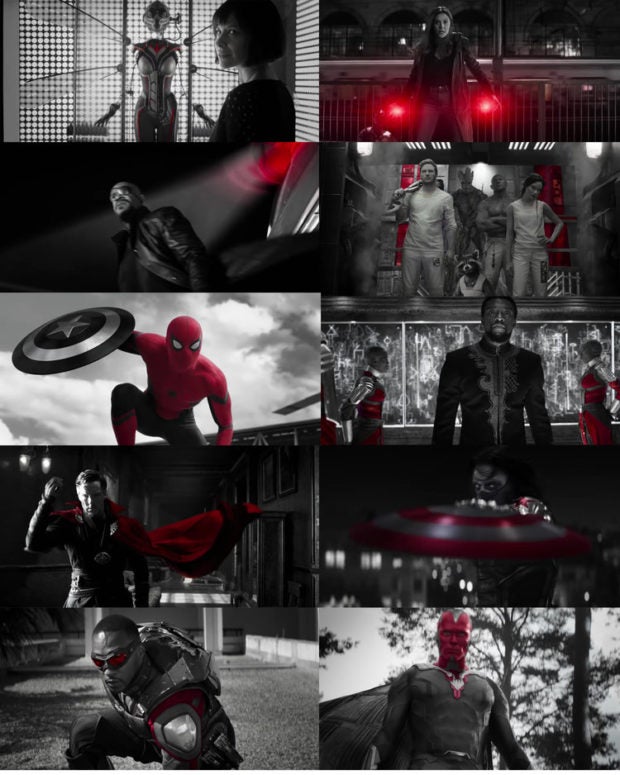 Then it suddenly switches to the 10th Anniversary Marvel Studios logo which turns to ash very quickly.

We cut to a shot moving over water. We see New York covered in really thick fog.

Then we see Liberty Island, with the lit Statue of Liberty, and the island surrounded by boats. Nothing is moving. 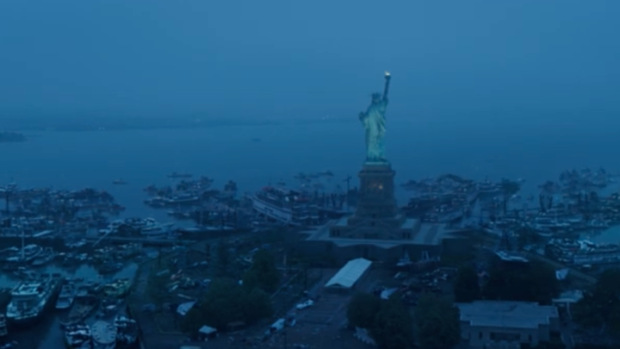 The next shot is Citi Field, home of the New York Mets. It is completely deserted and inert. 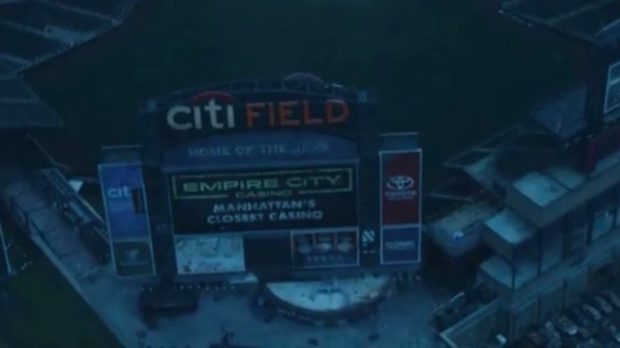 Then, we cut to a room with upturned chairs. There is a poster that reads: Where do we go, now that they’re gone?” 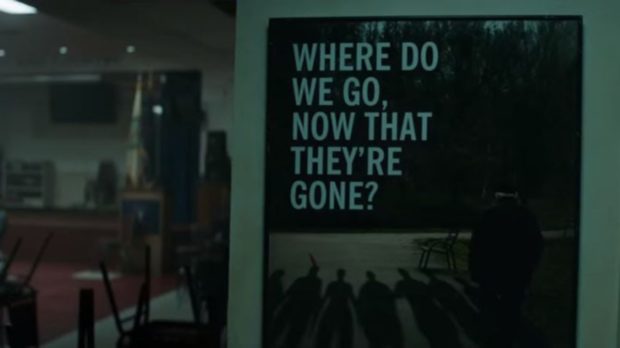 We hear Captain America’s voice: Some people move on.”

We get a close-up of a cleanly shaven Steve Rogers (Chris Evans), who wears a very sad, defeated expression on his face as he clenches his jaw.

Cap again: “But not us.” The music rises.

We see Tony Stark (Robert Downey Jr.) working on something with Nebula (Karen Gillan) next to him.

We see Black Widow, Steve, Bruce Banner (Mark Ruffalo) and War Machine (Don Cheadle) walking outside the Avengers base, looking slack-jawed at something. 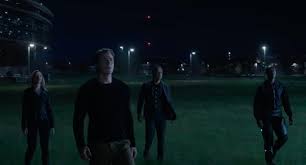 We see Rocket (voiced by Bradley Cooper) opening the door of what appears to be a wooden shack with nets in the water in the background.

Black Widow is practicing her shooting with a pistol in an indoor firing range. 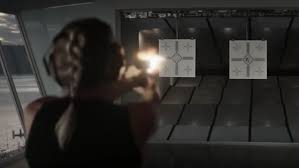 Ant-Man (Paul Rudd) and War Machine stand next to each other, their helmets going down over their faces, getting ready for something.

There’s an extreme close-up of a grim-looking Thor (Chris Hemsworth), then we cut back to a wider shot of Thor walking to an large opening of some sort, a weapon in his hand. 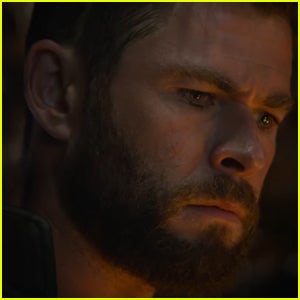 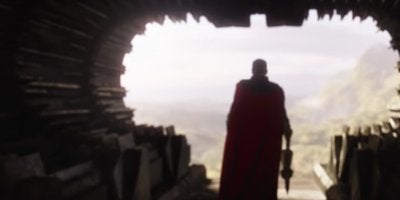 Then we get a shot over Hawkeye (Jeremy Renner), looking up at something. 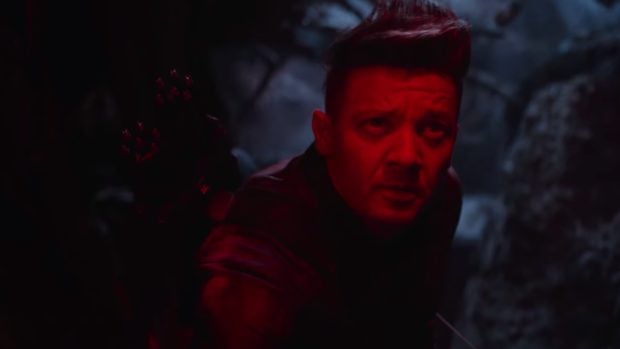 We cut away to Cap’s gloved hands nervously tightening the straps on his shield.

We cut to black and then we hear the words again: “Not us.”

We see the surviving heroes walking through a brightly lit hanger, one we know is in the Avengers base. They’re walking with purpose, as if they’re getting ready to leave for somewhere else. 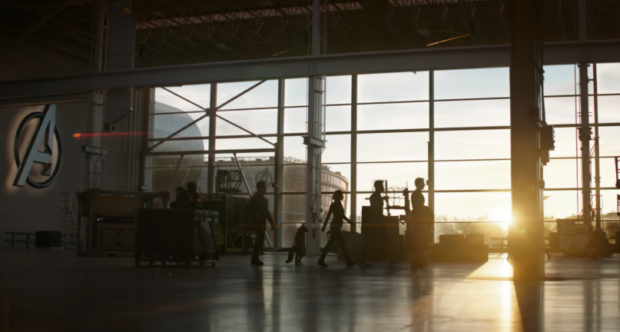 Cut to black, then the Avengers “A” logo, which transforms into “April.” So we get a very short trailer, but all of it is new footage, and even answer some burning questions.

The scene before the Marvel Studios card is a sad reminder that these heroes were killed in an instant—the same period of time taken up by the reminding. The scenes are all from previous MCU films and do have some surviving heroes in the shots—Rocket—but they are framed together with the dead heroes, who are the focus on the sequence. That’s also why the Marvel Studios logo turns to ash so quickly.

Those scenes are all done up in black and red only, reflecting the same colors of the Marvel Studios card.

The following shots are among the first shots we get of the world after the snap. The New York skyline is covered in darkness, indicating the gloom that’s fallen upon the world due to Thanos. The shots of Liberty Island and Citi Field prove that life has come to a stop, and that nobody goes to entertainment events like ballgames. This is the status of normal life now, with half the world’s population gone.

The poster indicates that Cap is taking part of some support group for those who are grappling with the new reality. Cap clearly isn’t doing well. We can note that Evans is clean shaven, a distinguishing mark of Cap after “Infinity War.” He isn’t doing well, as shown by his facial expression and slow shaking of his head.

His own words prove it. “Some people move on” points to the people living with the new diminished reality, with the empty spaces.

But Cap isn’t one of them. None of the Avengers are. Thus we get: “Not us.”

This statement begins the part of the trailer that shows the “us” who are not moving on. They’re the ones who are going to try and change things.

Also note how these scenes contrast with the scenes from the previous teaser trailer.

The shot of Stark and Nebula working together is probably from the Benatar, the spaceship that we last saw floating without power in deep space and where Stark was recording a message for Pepper Potts because he was convinced he was going to die out there. A later shot from the teaser showed Nebula was aboard. So the shot of Nebula putting her arm on Stark’s shoulder leads to this one, where the two of them are actively working to fix the ship and get back to Earth somehow. We don’t see them again for the rest of the trailer so we know the two of them are not working with Cap’s group.

Speaking of Cap’s group: The shot outside the Avengers base confirms several things, most of important of all is that some of the surviving heroes are sticking together, probably planning something big. The shot reveals that a lot of time has passed, as the grass is unkempt and a little tall. Black Widow’s hair is the same blonde from “Infinity War” but longer for “Endgame.” She was originally a redhead but switched to blonde when she was in hiding between “Captain America: Civil War” and “Infinity War.” Now, she isn’t hiding anymore, so she can let her hair grow.

This is the same reason Steve Rogers doesn’t sport a beard. He’s not hiding either.

This is the only shot we get of Bruce Banner, so he is working with Cap’s group in his human scientist form.

We can now confirm that now only will War Machine—James “Rhodey” Rhodes—be part of Cap’s cell, but that he can now walk again, his paralyzing injuries from “Civil War” now apparently undone, perhaps by the tech Stark was using at the end of “Civil War,” by magic or something else.

They’re looking at something big that appears to be landing. It is most likely the Benatar, which Stark and Nebula have fixed. Remember, Cap and company weren’t out in space, so they have never seen the Benatar or its lost sister ship, the Milano.

This will lead to the long-awaiting reunion of Cap and Stark, and the beginning of their unified efforts to fix the world.

Meanwhile: Rocket is clearly on Earth (as proven by the scene behind him) and he has come to pick someone up.

Black Widow is preparing to go on a mission, as she is shown working on her shooting. Her long blonde hair is done up in a braid.

We now meet one more member of Cap’s team: Ant-Man. We know from the previous teaser that Scott Lang showed up at the Avenger’s base, shocking Cap and Black Widow because they had thought him erased by the snap. This scene proves that the scene with Scott and the van is set in the present, not in the past. Ant-Man’s ready to go, as is War Machine, by the look of things.

We got a shot of the person Rocket has most likely come to pick up: Thor. He remembers that he had a chance to kill Thanos but did not hit Thanos’ head, leading to the snap. He too can’t move on. He has probably been keeping to himself all this time but now Rocket has come for him, so they can join Cap’s desperate mission. The background seems to indicate this is Wakanda. Thor then dresses up in his cape and picks up his axe Stormbringer.

The teaser trailer showed us Hawkeye dressed as Ronin in the streets of Tokyo. This new shot of Hawkeye proves that the Tokyo scene was either in an alternate reality (probably, but unlikely) or that Hawkeye changes back to his original duds (most likely) when he joins Cap. He still looks haunted by his family being erased by the snap, destroying the quiet life he had (that’s why he wasn’t in “Infinity War”) and will now work to bring them back.

The shot of Cap tightening the straps on his shield shows that not only is Cap getting ready to get back to action, but he also regains his original circular shield. After shunning the mantle of the star-spangled hero in “Infinity War,” Steve Rogers is Captain America once again.

The teaser trailer had a shot of this Avengers base hanger but it was empty, indicating the powerlessness of the team after the snap and that nothing was happening.

It isn’t empty anymore. We hear the music turning into the “Avengers” theme by Alan Silvestri.

The sunrise (or sunset) is broken by the silhouettes of seven people and Rocket walking with purpose, most likely to a waiting Quinjet to take them to action. We can clearly make out Cap (the shield), Thor behind him, Black Widow, Rocket Ant-Man. It’s a bit more obscured, but we can assume the last two are War Machine (he’s leaning into someone) and probably Hawkeye,

This is Cap’s team. They’re getting ready to face Thanos.

We have yet to get a full “Avengers: Endgame” trailer but if you put the last two teasers together, we can feel the anticipation for April 26. The directors—Joe and Anthony Russo—have also succeeded in whetting our appetites for the final “Avengers” film without actually showing us anything of real substance. Well done—now give us a full trailer!