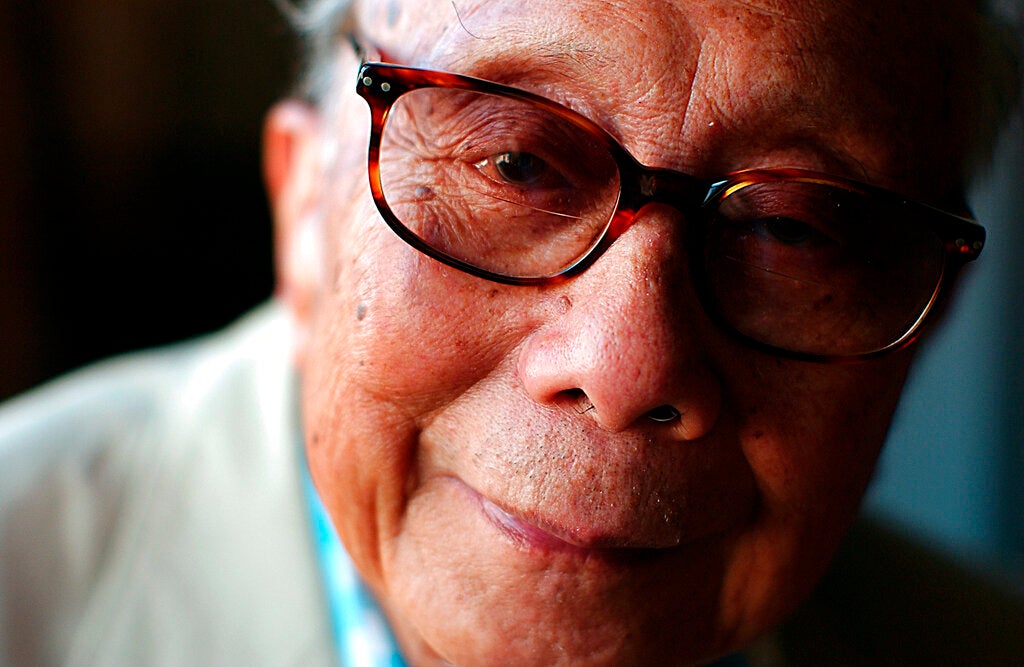 FILE - This Sept. 28, 2002 file photo shows author C.Y. Lee in New York. Lee, 102, the author of the best-selling “The Flower Drum Song” died on Nov. 8 in Los Angeles. The family decided at the time not to make his death public. (AP Photo/Gino Domenico, File)

NEW YORK — C.Y. Lee, whose novel “The Flower Drum Song” became a best seller and the basis for a famous stage musical and Oscar-nominated film despite mixed critical reactions and concerns about stereotypes, has died at age 102.

Lee’s son, Jay Lee, told The Associated Press that his father died Nov. 8 in Los Angeles. The family decided at the time not to make his death public.

“The Flower Drum Song,” a story of generational conflict set in San Francisco’s Chinatown, came out in 1957 and quickly became a popular read.

The New York Times’ Idwal Jones praised Lee’s “objective eye,” but also faulted the book for its absence of “deeper notes” and its affinity for “slang and sex” and “popular taste.” (The author would later acknowledge he wanted to reach a large audience).

Lee’s debut novel attracted the attention of screenwriter Joseph Fields and composers Richard Rodgers and Oscar Hammerstein II. Their musical adaptation, originally directed by Gene Kelly, ran on Broadway from 1958-60 and was revived in 2002, with a book by “M. Butterfly” playwright David Henry Hwang.

A 1961 film version, among the first major Hollywood productions to feature an Asian cast, received five Academy Award nominations despite being called by The New Yorker an “elaborate fraud” and a showcase for crude stereotypes.

Lee has since been praised as among the first Asian novelists to break through commercially in the U.S. and Hwang is among those who thought the book underrated. “Flower Drum Song” was out of print at the time Hwang worked on the Broadway revival and he had to track it down from a Seattle bookseller.

“I thought, ‘Oh, it’s such a shame this author and this book have been lost, particularly the bittersweet tone of the novel,'” Hwang told the AP in 2001.

“C.Y.’s book is complicated in terms of texture about what it means to be an American — the things you gain and the things you lose — but it ultimately affirms the value of this social experience.”

A native of China who emigrated to the U.S. during World War II, Chin Yang Lee wrote several other novels, including “China Saga” and “Gate of Rage,” based on pro-democracy protests in 1989 centered on Tiananmen Square.

He spent more than a year writing “Flower Drum Song,” and at the time was renting a small apartment above a Filipino nightclub in San Francisco. He was employed at the time by a Chinese-language newspaper, for which he wrote stories for elderly readers. For his novel, he drew upon his observations about the difference between older immigrants and their more assimilated children.

“In Chinatown, I knew everything that was going on,” he told the AP in 2002. “Out of that I created characters, using everybody including my own family and my friends, plus a lot of invention from the air.”

Lee struggled to find a publisher. After more than a dozen rejections, he was warned by his agent that he might have to “think of another profession.”

“But then the novel landed at the sick bed of an 80-year-old gentleman, who was a reader for a highbrow publishing house (Farrar, Straus),” Lee told the AP. “He was quite ill, but he read it. He didn’t have the energy to write a two- or three-page critique. He wrote only two words — ‘Read this’ — and died.

“Without those two words, the novel would have never been published.” /ee