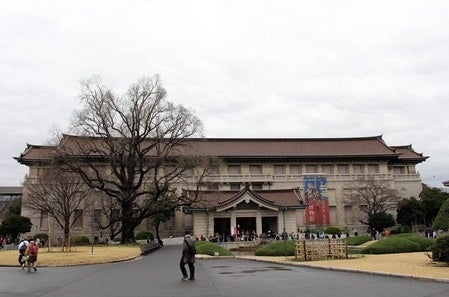 TOKYO — The Cultural Affairs Agency is planning to introduce new services for foreign visitors at the Tokyo National Museum in Taito Ward, Tokyo, including a multilingual guide app for smartphones and a special section in the museum for foreigners to experience traditional Japanese culture, sources said.

The new features are part of efforts to improve sightseeing for travelers from overseas, and thereby help achieve the government’s target of 40 million foreign visitors to Japan in 2020. Services that prove successful will be introduced to other museums one by one.

Popularly called Tohaku, the Tokyo National Museum opened in 1872 and is one of the country’s finest such facilities, housing about 117,000 pieces of Japanese artwork and archaeological relics. In fiscal 2017, the museum had 2.57 million visitors, including many foreign tourists.

The museum is set to play a key role in Nihonhaku, a festival of arts and culture to be held in tandem with the 2020 Tokyo Olympics and Paralympics.

Tohaku will start the new services this year, as part of what it calls “Tohaku shinjidai plan” (A plan for Tohaku in a new era). The guide app will offer supplementary information for about 850 leading items among the museum’s collection in Japanese, English, Chinese and Korean, and is scheduled to be put into use in spring 2020. Visitors will need to download the app on their smartphones.

Basic information on Japanese history and culture will be added to the app in line with foreign visitors’ requests, making it easier for them to understand the exhibited items than with the existing audio guide devices.

Tohaku will also officially start paid museum tours accompanied by interpreter-guides, as well as behind-the-scenes tours to let non-Japanese visitors look at the museum’s archives and see how cultural assets are repaired.

Besides, a masterpiece gallery will be established to showcase high-definition replicas and 8K ultrahigh-definition images of artifacts from the museum’s vaults that are displayed only for limited periods of time for the sake of preservation. Among those works are “Shorinzubyobu” (Pine Trees) by Hasegawa Tohaku and “Fugakusanjurokkei Kanagawaokinamiura” (Thirty-six Views of Mount. Fuji: The Great Waves off Kanagawa) by Katsushika Hokusai.

The number of foreign visitors to Japan last year totaled 31.19 million, a record high for the sixth consecutive year. To achieve the government’s goal of having 40 million foreign tourists come to Japan, the museum is working to provide multilingual services and interactive programs, which are also part of the plan for the Nihonhaku festival. Tohaku thereby intends to lead the way for other museums in the country.