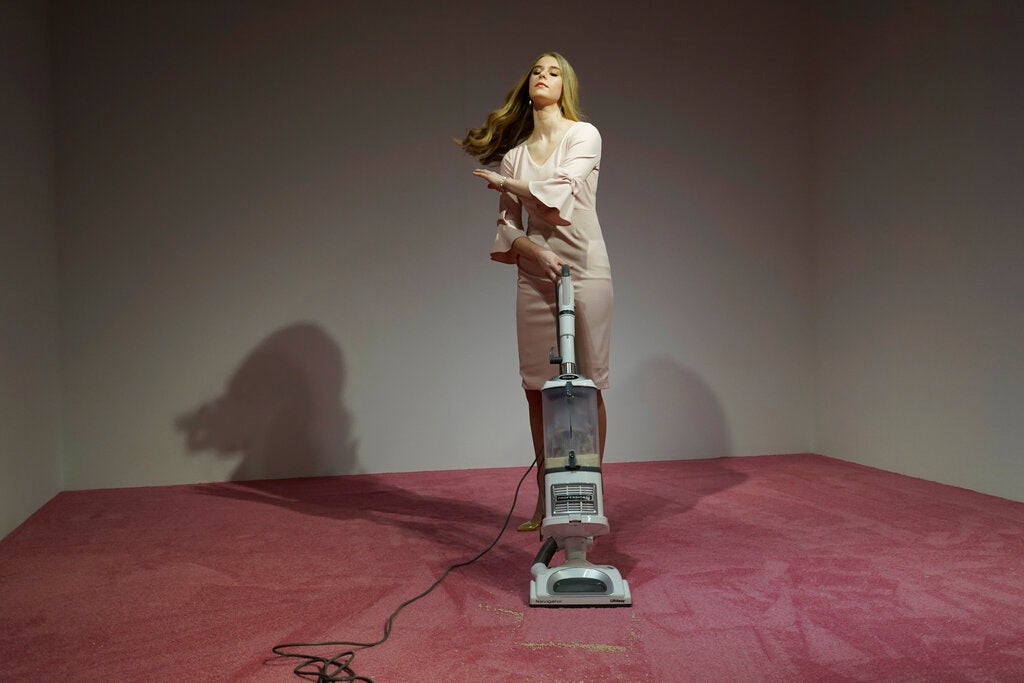 WASHINGTON — A new art exhibit at a Washington museum shows an Ivanka Trump lookalike pushing a vacuum cleaner and invites spectators to toss crumbs for her to clean up.

The art piece by Jennifer Rubell, titled “Ivanka Vacuuming,” opened Feb. 1 and continues through Feb. 17 at the Flashpoint Gallery. The public is encouraged to “throw crumbs onto the carpet, watching as Ivanka elegantly vacuums up the mess, her smile never wavering.”

A large text description of the work hanging on the gallery wall describes Ivanka Trump as “a figure whose public persona incorporates an almost comically wide range of feminine identities — daughter, wife, mother, sister, model, working woman, blonde.” It calls the act of throwing bread crumbs onto the carpet for her to vacuum “surprisingly pleasurable.”

But Ivanka Trump and her brothers Donald Trump Jr. and Eric Trump criticized the exhibit on Tuesday as a sexist attempt to humiliate her.

“Women can choose to knock each other down or build each other up. I choose the latter,” Ivanka Trump, a senior White House adviser, tweeted alongside a link to a story on the exhibit.

Trump Jr. tweeted, “Sad, but not surprising to watch self professed ‘feminists’ launching sexist attacks against @IvankaTrump. In their crazed world, sexism is OK if hurts their political enemies.”

Eric Trump, on Fox News, called his sister a “powerful woman who has done more for women than probably anybody in Washington D.C.”

The work is open to the public from 6 p.m. to 8 p.m. The exhibit is presented by the CulturalDC arts organization, and Executive Director Kristi Maiselman said her group is always happy to present “timely boundary-pushing installations” like this.

The gallery text declares Ivanka Trump to be a “contemporary feminine icon” and an avatar for the complexities of modern femininity.

Rubell, a New York-based conceptual artist, said in an interview on the CulturalDC website that the experience is meant to draw observers and crumb-throwers into a complicit relationship.

“Here is what’s complicated: We enjoy throwing the crumbs for Ivanka to vacuum. That is the icky truth at the center of the work. It’s funny, it’s pleasurable, it makes us feel powerful, and we want to do it more,” she says. “Also, we know she’ll keep vacuuming whether we do it or not, so it’s not really our fault, right?” NVG

Anti-Trump art blossoms in US