The drama “Romance is a Bonus Book” from tvN is off to a promising start.  The romantic comedy series stars Lee Jong-suk (“W”, “While you were sleeping”) as Cha Eun-ho.  He is the youngest editor and one of the founding members in the publishing house he works for.

Playing his bestfriend Kang Dan-i is actress Lee Na-young. Dan-i is divorced, homeless and did not have a job for a year. She is forced to lie about her accomplishments to get accepted as an intern in the company Eun-ho works in.  The reason for the lie is infuriating—companies thought she lazed around as a housewife and a mother for years.

This is not some run-of-the-mill theme that you’ve seen a million times before. Here are the reasons why we will keep watching Lee Jong-suk’s newest series:

The female lead is a mom

Kang Dan-i represents a chunk of K-drama viewers.  She represents the housewives and the working moms who have to fight hard to keep their identities as a person while raising another human being. The struggles of being a single parent are also shown.   It’s satisfying to see her getting another chance at love and career.

Philippines is part of the story

In the drama, Dan-i’s child is studying in a boarding school in the Philippines.  It assures the audience that while she is suffering, her child is not.

Never mind that we don’t even get to see the child except during flashbacks.  Let’s also forgive the fact that Dan-i is penniless and boarding schools are expensive even in a third world like ours.  This being K-dramaland, we will allow the misconceptions about cheap education in the Philippines to fly.

Another character Oh Ji-yoo also talks about taking a vacation in Cebu.  This goes to show how popular the city is in South Korea. 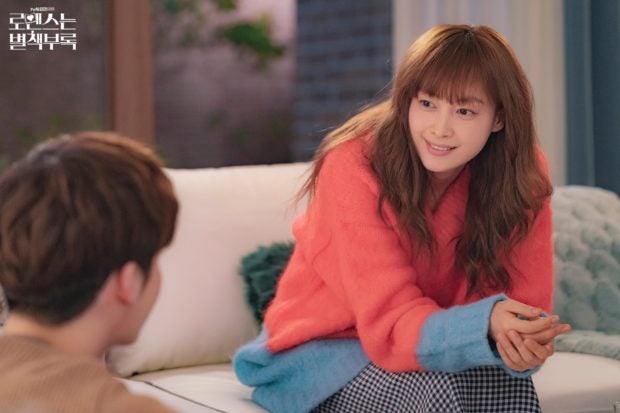 Dan-i is not a quivering virgin

Sex is part of conversation.  Dan-i is not being coy when she tells Eun-ho that she has not have any sex in a long time.  It makes conversation between long-time friends believable.

It is not love at first sight

We have only seen the love story from the perspective of Eun-ho.  And from where he’s at, his one-sided love grew through years of friendship and companionship.  How Lee Jong-suk’s character will communicate his feelings to the girl is something we cannot wait to see.

Books are stars, too

Lee Jong-suk’s character is a writer but his position in the company is an editor. Thus, he represents people whose names do not appear on the covers of books but work hard to make a title successful.

The process of book publishing is shown from concept to its launching.  Then there is also that moment in Episode 4 when they destroyed unsold books.  It felt like a million paper fairies die each time we play the scene.

Second lead will not distract you

There are dramas when the second lead is as irresistible as the lead.  There are only four episodes out but the current verdict is that Ji Seo-joon (Wi Ha-joon) is not going to win us over. He is a bit creepy.  We mean, who keeps a pair of ladies’ shoes they found on the street the entire day with them?  The locked room is also not helping win us over.

One of our favorite eye-candies rewards his fans with his turtleneck and jacket.  He breaks into a smile more often in this drama than in his past series.  That should be enough reason to start watching.  He also does a bit of fan service by dancing Produce 101’s “Nayana” on the fourth episode.

READ: The Super guide to Wanna One

Cha Eun-ho screams warmth and comfort.  These are what you will love about Lee Jong-suk’s character.  He’s endearing and loyal. He is someone you can trust on. Having someone like him to depend on makes you feel like you saved a nation in your past life.