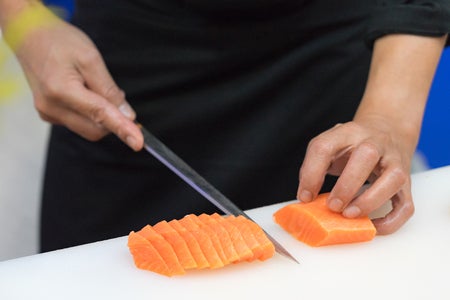 Restaurant worker in Japan throws fish in trash, returns it to cutting board

One worker in Japan’s largest sushi chain was found throwing a sliced fish into a trash can before retrieving it and setting it back on the cutting board.

In the video, the worker can be seen slicing fish on a counter inside the kitchen. He then took a piece of sliced fish and tossed it into a blue trash can before retrieving it back with his gloved hands. The trash can contained styrofoam trays and plastic.

The worker, as per the report, then uploaded the video online where it went viral.

The company has since issued a statement, saying the fish was not served to any of its costumers. However, it was taking the incident seriously and assessing whether to take legal action or not.

Moreover, the company apologized to its customers who may have been disgusted by the video.

“We deeply apologize for causing disgust and unease to our customers because of this footage,” the company was quoted as saying. It is also taking efforts to train its employees to ensure no similar incidents will happen again in the future.  Cody Cepeda /ra