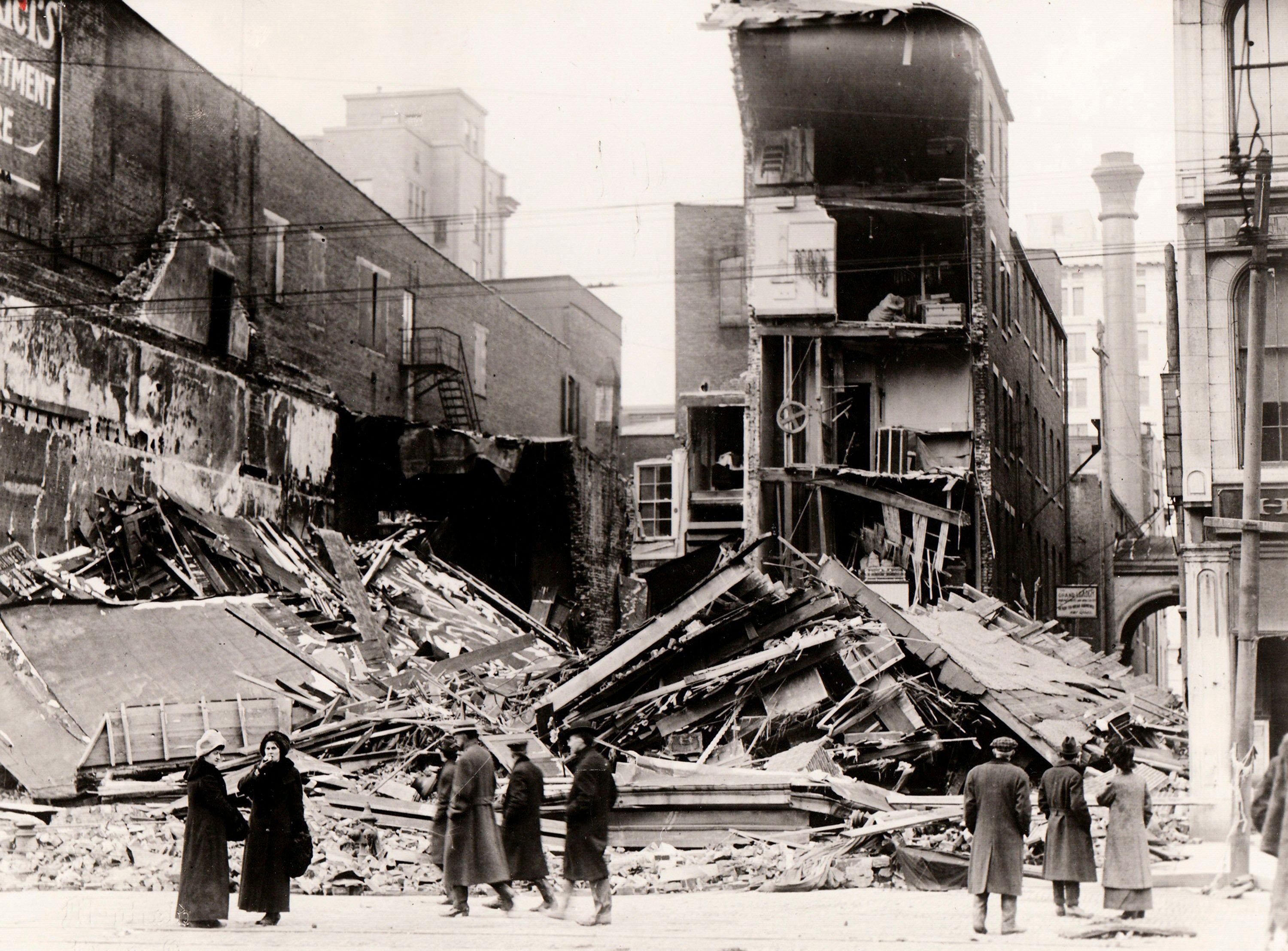 In this 1913 file photo shows the destruction at East Third and Jefferson Streets after the 1913 flood in Dayton, Ohio. A new opera revisits the Great Flood of 1913, a Midwestern disaster that killed hundreds, left thousands homeless, and destroyed countless bridges and businesses, but that also paved the way for flood control innovations. The dark subject matter is well-suited to opera, said Peggy Kriha Dye, general and artistic director of Opera Columbus. (Dayton Daily News, File)

Opera, orchestra team up to tell story of deadly 1913 flood

A new opera revisits the Great Flood of 1913, a Midwestern disaster that killed hundreds, left thousands homeless, and destroyed countless bridges and businesses, but that also paved the way for flood control innovations.

“We’re used to drama and death and dealing with those topics,” she said. “Opera is the perfect form to do that because everything is heightened in this art form. It can handle heavy topics.”

The inundation began on Easter weekend as usually heavy rain fell on ground either frozen or already saturated from snowmelt after a harsh winter, eventually flooding most rivers and streams across the region.

The same weather system led to significant flooding in more than a dozen states, from Illinois through Connecticut, causing hundreds of millions of dollars in damage. Many smaller Ohio River communities from Cairo, Illinois, to Wheeling, West Virginia, were all but destroyed.

“The Flood,” opening Friday at the historic Southern Theater in Columbus, is the first collaboration between Opera Columbus and the ProMusica Chamber Orchestra.

The opera tells the story of the flood through a mystery involving a family affected by the destruction. It begins in Columbus after the flood has struck and follows family members through time to the present day as the personal and public effects of the disaster are examined.

While not everyone has experienced a flood, most people are familiar with tragedy of one kind or another, said Janet Chen, ProMusica’s executive director.

“There’s an element within this work that I think people can take away on a personal level,” she said.

“The Flood” is in English and just over an hour long. It was commissioned through a $150,000 Arts Prize grant from the Columbus Foundation’s Arts Innovation Fund.

The flood and its aftermath

The June 1912 eruption of the Novarupta volcano in Alaska — 30 times more powerful than the Mount St. Helens explosion — pumped so much debris into the atmosphere that it led to a long, cold “volcanic winter.” As a result, rainfall produced by the convergence of three extreme storm fronts in late March had nowhere to go, according to historian Conrade Hinds, author of “Columbus and the Great Flood of 1913.”

The catastrophe began with a series of deadly tornadoes in eastern Nebraska and western Iowa that killed more than 150 people on Easter Sunday and injured hundreds more before the storm system creating the tornadoes pushed eastward.

State historians say that at least 467 people died in Ohio during the flood, and that more than 20,000 homes were destroyed. A list of victims published in the Columbus Evening Dispatch included “Mr. and Mrs. George Eckert and seven children.” In hard-hit Dayton, the amount of water that passed through the Great Miami River and its tributaries in three days equaled the amount of water that flows over Niagara Falls in a month.