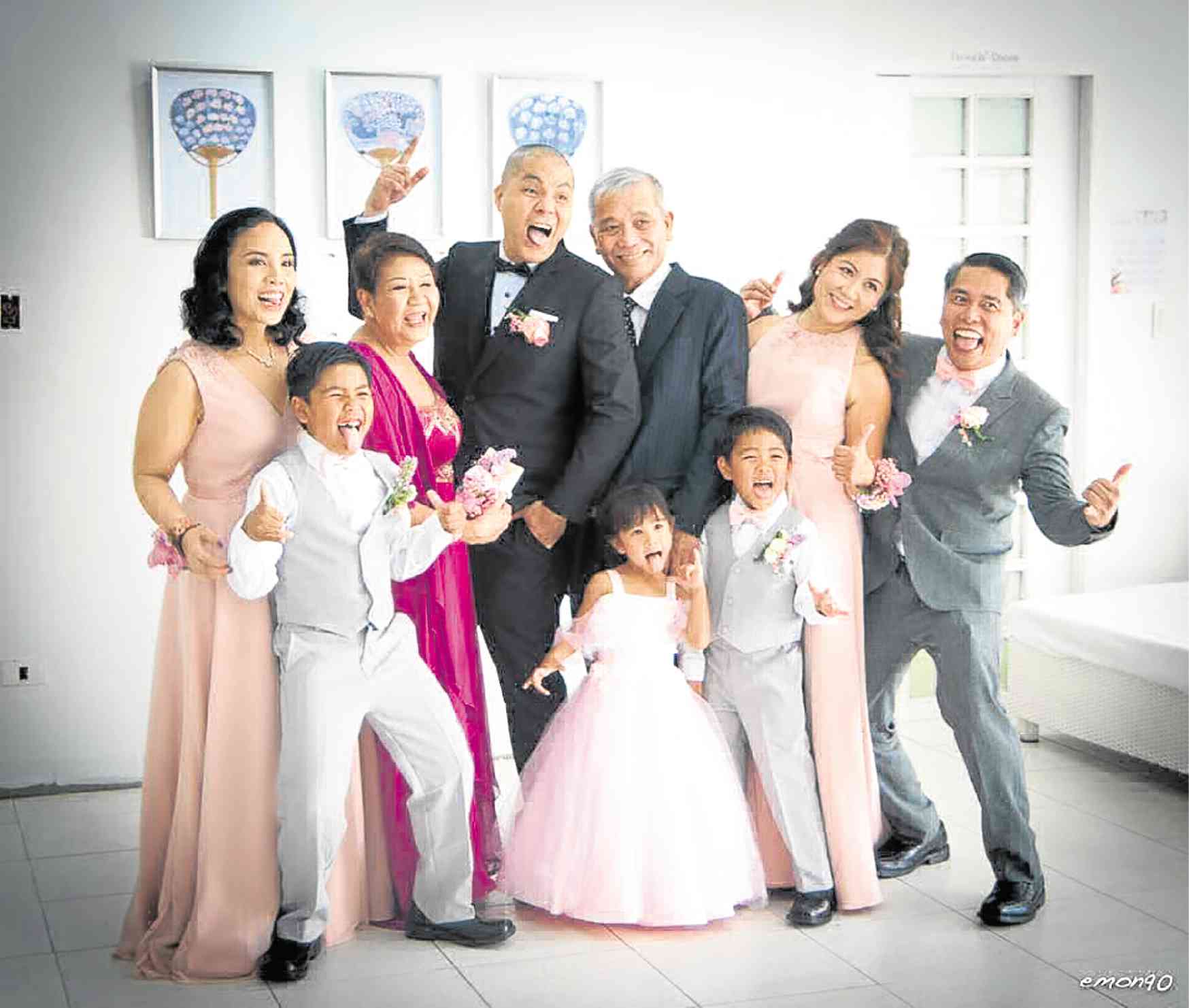 When my son Roel and his fiancée Agnes Agcaoili were planning what they wanted to be a small, intimate wedding, they took pains to make sure that the sentimental details that meant much to them would be followed. That seemed to be the guiding principle that ruled all decisions.

It helped that they had known each other decades back as college classmates in La Salle Taft. They were mere classmates then because Agnes was “crush ng bayan,” while Roel was one of the boys gawking at her.

Agnes had always dreamed of a garden wedding—thus, the ideal choice had to be the Parish of the Immaculate Heart of Mary in Antipolo, a light and airy structure inspired by the hills of Antipolo, designed by Dominic Galicia. The building structure is hardly there, so the greenery and the Nov. 14 mid-afternoon sunlight made a strong presence.

Although the list of principal sponsors was long, these were individuals and role models who played an important role in their lives and careers. Fr. Prex Fajardo, the officiating priest, flew in from Iloilo where his current apostolate is. He knew Roel as a young boy.

Agnes’ close friends through her years with Banco de Oro were there to lend support. Radio DJ and sportscaster Boom Gonzalez cleared his usually impossible schedule to be the reception emcee, for love of Agnes.

The reception was rich with sentimental touches. Roel’s nephew, Diego, began with the prayer before meals and had messages from Agnes’ son, Kirk, and Roel’s parents. Some of Roel’s writing students in Write Things, the family-run writing center, were present.

A big help to Agnes was her high school gangmate from St. Scholastica’s, Jenny Peregrina-Maagma, and her husband Ryan, who put their events planning resources to excellent use toward Agnes’ dream garden wedding.

To avoid the travails of Metro Manila traffic snarls, families and friends stayed the day before at the fairly new Le Blanc Resort Hotel, also the site of the wedding reception. Family members traveled from overseas—from Singapore, Australia, China and the US.

Why, even the couple’s beloved toy poodles, Bruce Wayne and Harley Quinn, listed in the wedding invite as Best Pup and Pup of Honor, came in wedding finery.

It was touching to see Agnes, the daughter of the late journalist Frederick K. Agcaoili, walk  down the aisle with her mother, Zenaida Aliwalas Agcaoili, and her son, Kirk Terrence Agcaoili.

But probably the most important and surprising highlight was the exchange of vows when the religious ceremonies were over—Roel and Agnes read out the vows they co-wrote in Filipino, with a little help from the Eraserheads’ famous song, “Alapaap.” The vows celebrate the depth of their relationship, rekindled only 23 years after their last meeting, and the beauty of our national language. A few lines from the vows: “Sa hirap at ginhawa, kalusugan at allergies, sakit ng ulo o patabang puso, sumpong at saya. Ipinapangako ko, palaging ikaw at ako…”

It is hard for me as a mother to see Roel now ready to be the head of a family, because I still am fresh with memories of his grade school and high school years in La Salle Zobel, where I had weekly conferences with his teachers.

He was clever and cunning. He discovered Santa’s presents in a secret hiding place even before Santa was ready to deliver them. He has neither forgotten nor forgiven me for throwing out his gold mine of a comic book collection to our bote dyaryo suki, hoping that he would focus more on schoolwork. It did not work.

Roel is, of course, a totally different person today with such a way with words that his father and I envy. In wishing both of them the love and the friendship that last forever, I thought the best gift to give them that day was the gift of words, the last lines of a poem of one of his former literature professors, R. Zamora Linmark.

“That’s the closest to my idea of love: watching the skyline, making out, making mistakes, making believe desire means it’s with somebody else, then breaking up, and forgiveness that comes right before takeoff. What more can one want? A lover who loves me as much as rain…”

And also, from an American Indian Marriage Blessing:

Now you will feel no rain,

for each of you will be shelter for the other.

Now you will feel no cold,

for each of you will be warmth to the other.

Now there is no loneliness

Now you are two persons

but there is only one life before you.

Go now to your dwelling

To enter into the days

Of your life together.

And may your days be good and long upon the earth.